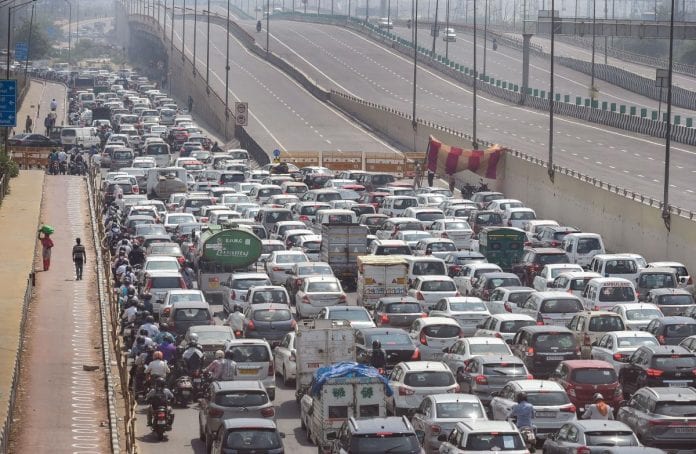 Appealing to the youth and start-ups to join the programme, Modi said: “The launch of Vehicle Scrappage Policy today is a significant milestone in India’s development journey. The Investor Summit in Gujarat for setting up vehicle scrapping infrastructure opens a new range of possibilities. I would request our youth and start-ups to join this programme.”

The scrappage policy is a government-funded programme to remove old vehicles from roads. It is expected to reduce pollution, create job opportunities and boost demand for new vehicles.

On March 18, 2021, Minister for Road Transport & Highways Nitin Gadkari had introduced the the vehicle scrappage scheme in the Lok Sabha.

“The government will announce a voluntary vehicle scrapping policy to phase out old and unfit vehicles,” Finance Minister Nirmala Sitharaman had stated in her Budget speech on February 1. She said the move would encourage the use of fuel-efficient, environment-friendly vehicles, thereby reducing vehicular pollution and oil imports.

Also read: Vehicle scrappage policy in its current form will be a non-starter

Several countries, including the US, Germany, Canada and China, have introduced vehicle scrappage policies to boost their auto industries and check vehicular pollution. The US has implemented the Car Allowance Rebate System (CARS), also called Cash for Clunkers programme, which offers credit incentives on scrapping older vehicles and replacing them with new and more fuel-efficient vehicles.

“Vehicle scrapping will help phase out unfit and polluting vehicles in an environment-friendly manner. Our aim is to create a viable #circulareconomy and bring value for all stakeholders while being environmentally responsible,” said the PM.

Earlier this week, Gadkari had announced that the PM would introduce the National Automobile Scrappage Policy during the ‘Investors Summit for setting up Vehicle Scrapping Infrastructure’ in Gandhinagar.

The PM said the new policy will attract investments of around ₹10,000 crore. Alang in Gujarat may also emerge a hub for vehicle scrapping, he added.

The policy aims to build scrapping infrastructure in the form of Registered Vehicle Scrapping Facilities and Automated Testing Stations in India.

Speaking at the event in Gujarat, Gadkari said the scrappage policy is likely to reduce raw material costs by around 40%. The policy will reduce India’s dependence on imported scrap steel (worth about ₹22,000 crore). The Minister also stressed that the policy will help make India an industrial hub of automotive manufacturing.

The proposed policy introduces several incentives for scrapping old vehicles and buying new ones. Among these, vehicle manufacturers can give up to 5% discount for buying new vehicles; governments can offer zero new registration fee; scrap value equivalent of 4-6% of ex-showroom price of new vehicles can be introduced; and states can give up to 25% and 15% rebate on road tax for personal and commercial vehicles, respectively.

There are disincentives for keeping old vehicles, too. For instance, states can levy an additional ‘green tax,’ hike renewal of registration fee for private vehicles, increase renewal of fitness certification for commercial vehicles and automatically deregister unfit vehicles.

The vehicles to be exempt are: Strong hybrids and electric vehicles, vehicles using alternative fuels such as CNG, ethanol and LPG; and farm and agricultural equipment such as tractors, tillers and harvesters.

Critics had pointed to some “misses” in the draft policy. For instance, the Central government has not committed to make it a fiscal stimulus strategy in the post-COVID times for quicker renewal of ageing, heavy duty vehicle fleet with Bharat Stage VI vehicles or to link other segments with targeted electrification.

The proposed policy, critics say, puts the entire responsibility of incentivizing fleet renewal on the state governments. They have been advised to waive a big chunk of road tax and registration fees on replacement vehicles. These are important sources of state revenue.