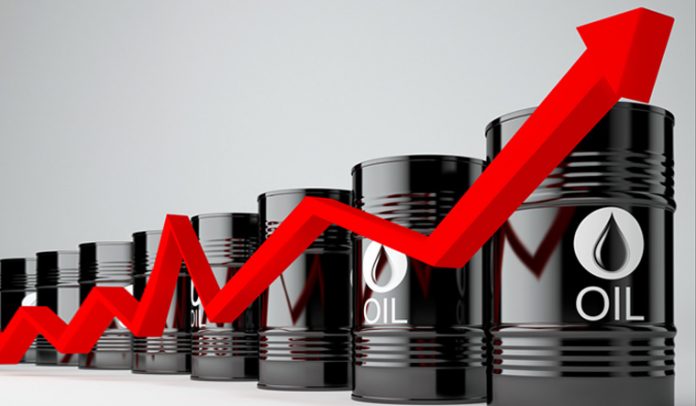 Black gold gets a boost: Brent crude oil futures markets are factoring in a scarcity premium, which has expanded to the maximum since 2013 last week pointing to a tight supply in the market. This in turn is spurring the rally in oil prices

Brent oil futures were trading up on the morning of Monday (October 19 ) in Asia sharply scaling multi-year high levels on the back of growing demand for global fuel and with large electric power generators switching from expensive natural gas and coal to oil.

Moreover, traders have pointed out that Brent crude oil futures markets are factoring in a “scarcity premium”, which has expanded to the maximum since 2013 last week pointing to a tight supply in the market. This in turn is causing a surge in oil prices giving black gold a boost.

Jigar Pandit, director of Sharekhan commodities, said oil prices are expected to climb higher. “After breaching the major resistance mark of $77.00, crude oil is heading higher since the past couple of weeks. The chart structure suggests that the strength towards north is intact, which might push the crude oil till the mark of $90.00, which is 78.6 per cent Fibonacci retracement mark of the previous fall.”

The futures price of Brent this year (2021) has already spiked by about 61.8 per cent (fibonacci retracement level) and hit $85 for the first time since 2018 last Friday, (October 15). OPEC’s restraint on supplies and record European gas prices, which will encourage a switch to oil in power generation are also considered to be key reasons for this record rally.

Tight gas supplies in Europe have pushed the price of the European benchmark TTF contract to an average $33.77/MMBtu in Q4, up by more than 15 per cent from the Q3 average of $29.00/MMBtu. High gas prices have also resulted in fertiliser plants shutting down, creating a spike in prices in Europe.

According to traders, the expansion of the scarcity premium to the maximum since 2013 last week is normally viewed as a sign of the tight supply in the market. This is triggering the rally in oil market prices buoyed by fundamental factors such as a global energy crunch and global economies being seen as moving on the path to recovery from the COVID-19 pandemic.

High premiums for short-term oil deliveries point to an acute tightness of supply, brought about by robust demand and limited supply. This is in direct contrast to the discount we saw during the pandemic lockdowns last year when there were contracts in crude which even closed at ‘negative prices’ for the first time ever.

This type of market pricing wherein prices for immediate contracts for delivery are higher than those for future supply, is known as backwardation. The opposite, in which nearby contract prices are cheaper, indicates plentiful supply and is called contango.

In the classical theory of futures markets, two types of models for valuation are normally used to explain the term structure of commodity futures. Premium due to net hedging pressure or premium due to scarcity.

Scarcity-related risk premiums are low if inventories are full and become higher as inventories decrease. Globally, consumers around the world are likely to feel the pinch of these higher energy prices as demand outpaces supply, which will then probably lead to an increase in the cost of travel, heating requirements during winter and as a secondary effect, on food prices.

Oil demand has been on the rebound across the globe, as nations slowly recover from the pandemic. In India, in spite of the high prices, diesel consumption is picking up with the onset of annual festivals, boosting sales to about pre-virus levels in the first half of October.

The United States, meanwhile, is expected to open its borders to foreigners who have been administered the vaccine from the first week of November and this is also expected to provide a boost to the aviation sector and in turn put pressure on fuel prices.