A string of measures announced on Friday (August 23) to boost liquidity, calm foreign investors, help some distressed sectors like automobiles and hand-hold small and medium enterprises, show that the government has finally acknowledged the economic slowdown.

These announcements also show that the government has given ear to the woes of the aam aadmi (common man) as well as India Inc, and it has dutifully promised more initiatives in the coming weeks to improve sentiment.

The added plus in the measures, unveiled by Finance Minister Nirmala Sitharaman, is that they will have a negligible fiscal implication and thus may not become burdensome for the exchequer.

So far, so good. But these measures by themselves may not be able to bring about any long term growth in the sagging Indian economy. Economists and market experts have pointed out that structural reforms are the need of the hour, that the government needs to step up public spending, and unless additional reforms are undertaken, the proposals announced on Friday will serve as piecemeal efforts at best.

Chief Economist at EY, DK Srivastava said the measures were in response to various representations by the industry and most were sectoral in nature. “But the underlying structural problems in the economy such as falling savings rates and declining public as well as private sector investments, remain.”

Srivastava explained that the growth potential of the economy depends on the rate of investment. “And government data indicate that from 2011-12, total investment (public and private corporate and household sector) has been falling. The overall fall is 7 percentage points between 2011-12 to 2017-18. After that, data is not available but indications are that the investments have fallen further.”

Indian households are not saving enough and this decline in household savings is happening alongside a demand slowdown because of domestic and external factors. Corporate profits are declining and new investments from private businesses are not happening.

As for public investment (made by the government), this has fallen because the government is running a high revenue deficit and cannot even increase borrowing since this is subject to limits of fiscal responsibility, Srivastava said.

He suggested reforms on the expenditure side by the government, including downsizing some ministries, and also that the Centre could reduce the divisible pool of tax revenues it now gives to states.

“Government should represent to the finance commission that the 42% divisible pool share to states should be reduced. At the same time it should also reduce the size of ministries dealing with state subjects so that its overall revenue expenditure comes down,” he said. 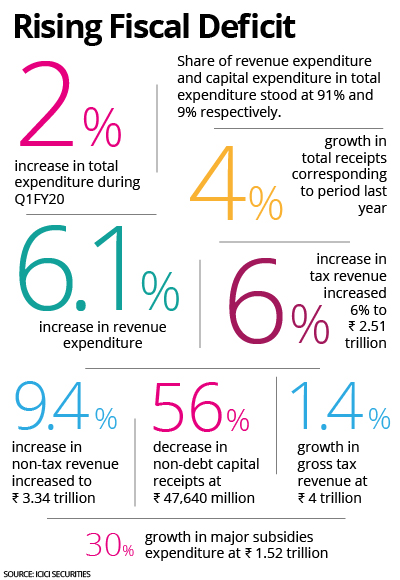 Sanjeev Prasad, Sunita Baldawa and Anindya Bhowmik of Kotak Institutional Equities said in a note that although the recent revival measures will help improve market sentiment and demand to some extent, the absence of any fiscal stimulus in the form of GST cuts may disappoint a section of the market.

Also, the sharp escalation in China-US trade issues will weigh on global investment sentiment and macro-economic conditions. These analysts have asked the government to follow up these announcements with structural reforms.

“We have long argued for (1) structural reforms in investment and (2) lower role of government in the economy as a sustainable way to increase GDP growth rate (productivity). Investment related reforms in manufacturing, covering various factors of production will be key for low-cost, labor-intensive manufacturing. Investment-related reforms in infrastructure, covering areas of ownership of infrastructure assets and pricing of services will be important for a greater role of private sector investment and more sustainable investment models. There is an over reliance on government entities for investment in infrastructure, which results in lower-than-optimal investment rates given the government’s fiscal constraints,” the Kotak analysts said.

On Friday, Finance Minister Nirmala Sitharaman proposed a string of measures to revive the economy:

2) For banks and finance companies: More liquidity by frontloading Rs 70,000 bank recapitalisation; banks to offer lower rates for housing and vehicle loans; one-time settlement policy for medium and small enterprises (MSMEs) since this sector appears to be most affected by the current slowdown; additional liquidity support to housing finance companies; fast tracking of pending GST dues to MSMEs.

3) For increasing capital flows: Government will establish an organisation to provide credit enhancement for infrastructure and housing projects to increase debt flow towards such projects; Aadhaar-based KYC to be permitted for opening demat accounts and investing in mutual funds

4) Automobile sector: Vehicles running on BSIV fuel to remain operational for the entire period of their registration; enhanced one-time registration fee to be deferred till next fiscal; additional 15% depreciation for all vehicles; lifting the ban on government purchase of vehicles and devising a scrappage policy.

These measures came after months of government’s dismissal of any pain the economy, though the slowdown can no longer be in question. Simultaneously, global ratings agency Moody’s has lowered the growth projection for India by 60 basis points (100 basis points mean 1 percentage point). The growth rates for India during 2019 and 2020 have been lowered to 6.2 and 6.7% respectively.

Also read: India’s GDP to grow at 6 per cent in April to June: Survey

Last month, the International Monetary Fund (IMF) had also lowered the growth estimate by 30 basis points for the current as well as next financial year. It had said that India’s economy is set to grow at 7% in 2019 and 7.2% in 2020. The downward revision for both years reflects a weaker-than-expected outlook for domestic demand.

An analysis by ratings firm CARE Ratings shows that corporate performance and profitability, for example, has been disappointing almost across the board in the first quarter (April-June 2019) this fiscal.

CARE analysts found that in a sample of almost 3,000 companies, net sales grew by a mere 4.6% against 13.5% in the comparable quarter last fiscal. And the aggregate net profit of these companies was up by 6.6% against the 24.6% in Q1 FY19. In other words, aggregate net profit growth was more than a fourth in the same quarter last fiscal but slipped to low single digit percentages in Q1 and sales growth fell by more than half.

But as we have said earlier, the measures announced by the government may not prove adequate to boost economic growth. Also, as the US-China trade tensions escalate and worsen global trade scenario, perhaps the government will realise the urgency of unleashing structural reforms.