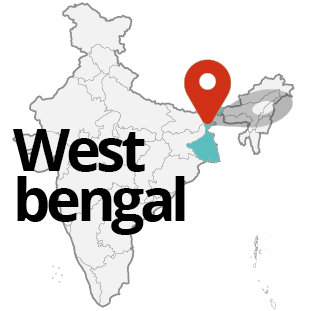 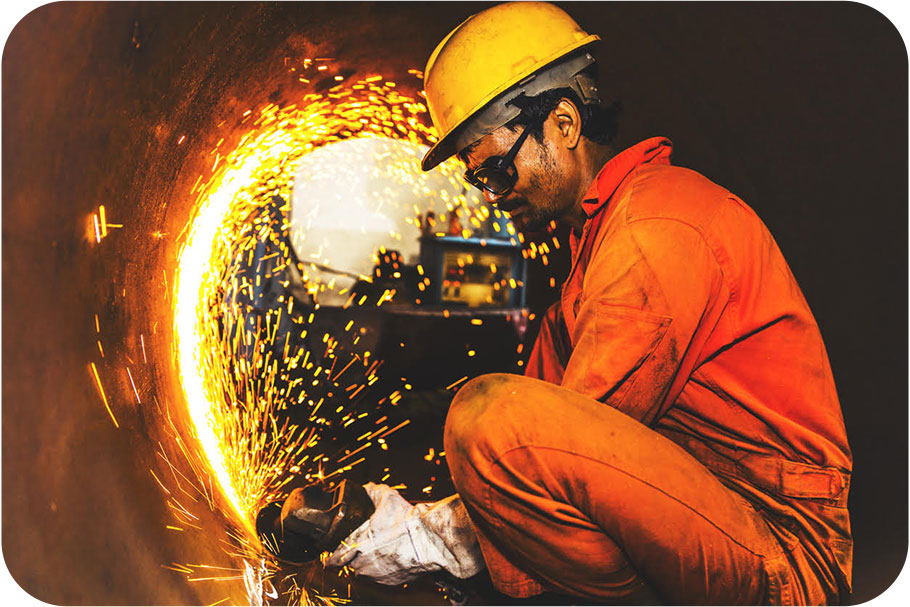 Satyajit Kundu, a third generation entrepreneur, is a worried man caught between compassion and compulsion.

Just seven months back, his foundry unit was bustling with activity – manufacturing of water pumps, pinion gears, pipes, manhole covers and other iron casting products was in full swing. Established in 1958 by his grandfather, the unit Lakshmi Foundry Works Private Limited in West Bengal’s Howrah is one of the leading manufacturers of hand pumps in eastern India.

The desolate expanse of Kundu’s production shed now, however, belies the reputation. There are hardly any activities here befitting a top manufacturing unit. Workers are seen mostly idling away duty hours doing nothing in particular as rows of different hand pumps components are laid out, waiting to be assembled only once new orders are placed. 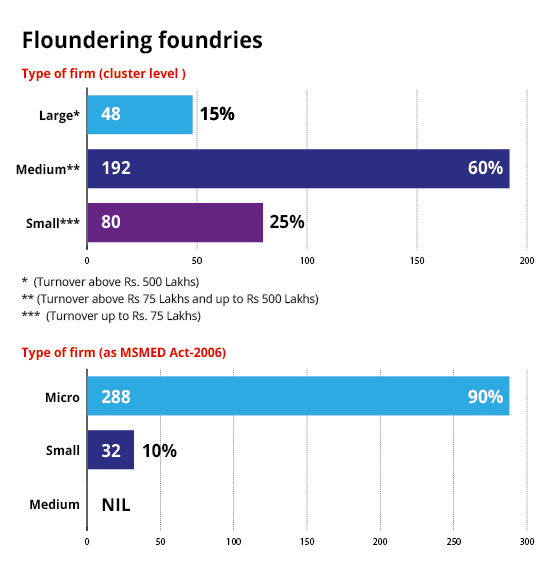 “Order for our products has dropped drastically in the past few months. On top of that payments from our clients have also become irregular,” Kundu says.

Lack of demand, he says, has made at least 25 per cent of his workforce redundant. “I have not yet retrenched them only because I don’t have the heart to take the unpleasant call ahead of festive Durga Puja season. But if the situation does not improve in a month or so, I will be forced to take the harsh step after puja.”

Hoping against hope that the situation might improve soon, Kundu fears that it otherwise would become difficult for him to sustain the business that has provided for his family for three generations.

I Job loss,
a reality

Similar tales of despair can be heard in almost all the foundry units lining either side of the Benaras Road and in and around Belgachia, Baltikuri, Bamungachi and Liluah, spreading over an area of about 78 sq km in Howrah district. But not everyone is as compassionate as Kundu. Several workers have already lost jobs as the foundry sector in West Bengal is bearing the brunt of what experts term a liquidity crunch in the market.

Though there is no exact figure of job loss, as per some estimates based on numbers provided by units attached to various foundry associations, it could be in the range of 10-15 per cent. 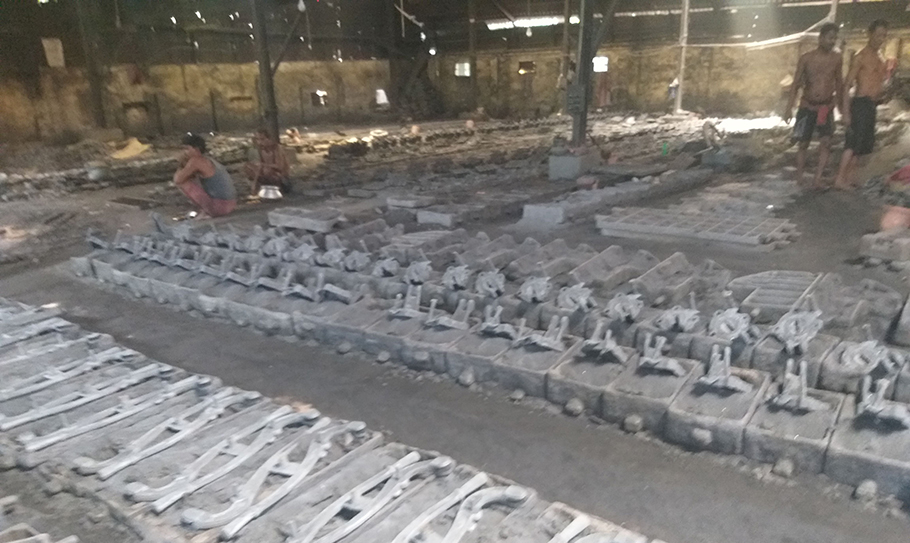 The unit of Lakshmi Foundry Works Private Limited in Howrah, one of the leading manufacturers of hand pumps in eastern India.

Umesh Rai from Bihar’s Munger is another victim of job loss. He was working as a mold and core maker at a foundry unit in Liluah. Early this month, he along with four others got the dreadful notice as the unit where they were working was pushed to the verge of closure.

Failing to find a new job in the recession-hit foundry sector, Rai now does odd jobs at a wholesale vegetable market in Howrah.

The foundry sector in West Bengal, mostly concentrated in Howrah, provides direct and indirect employment to around five lakh people, according to Adarsh Jaiswal, secretary of the Howrah Foundry Development Cluster.

I have not yet retrenched them only because I don’t have the heart to take the unpleasant call ahead of festive Durga Puja season. But if the situation does not improve… I will be forced
Satyajit Kundu, Owner, Lakshmi Foundry Works Private Limited, Howrah

“Unless some immediate remedial measures are taken by the government to revive the economy, livelihood of lakhs of people will be on the line because what we are facing today is an existential crisis,” Jaiswal said.

Those involved in the sector said the crisis is triggered by a sudden slump in demand due to general downturn in economy. Even the government-owned organisations like the railways have reduced the volume of procurement order to tighten their purse strings.

Overall, on an average, production is down by at least 30 per cent, according to an estimate given by Jaiswal. He said the situation was the worst for those units that were mostly catering to automobile companies like the Tata Motors. “Their businesses are down by almost 90 per cent.” Fortunately, only a few units in Howrah make auto components. 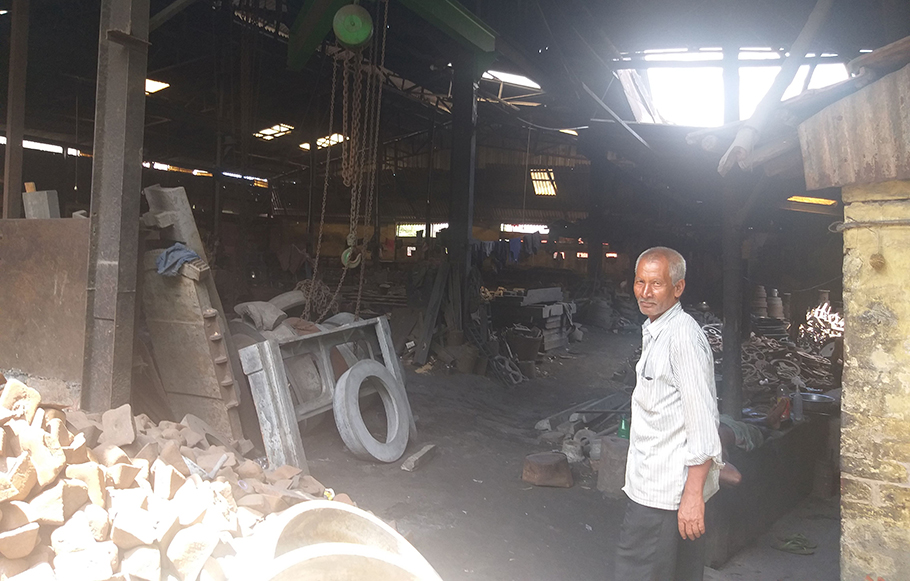 An empty foundry unit in Howrah

The total annual production of the existing foundries in the cluster is about 750,000 tons with an annual turnover in the range of something between ₹1,200 crore and ₹1,500 crore, as per a data published by the Howrah Foundry Association. If the present downturn continues, the turnover would see a fall in the range of ₹400 to ₹450 crore this fiscal due to the impact of 25 to 30 per cent drop in production, said Jaiswal.

Unless some immediate remedial measures are taken by the government to revive the economy, livelihood of lakhs of people will be on the line
Adarsh Jaiswal, secretary, Howrah Foundry Development Cluster

Kundu says since foundry units serve as ancillaries of other sectors like automobile, jute, textile, real estates and agriculture, any stimulus if provided to the latter by the government would also help foundries by spurring demand.

It’s on this stimulus that the Howrah foundry cluster and thousands of people associated with it are pinning their hope, for sustenance. Perhaps it is now the turn of the government to be compassionate.