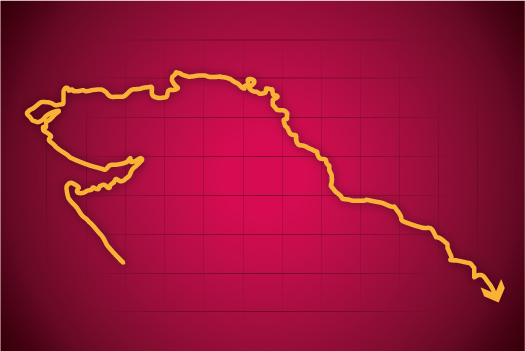 In Gujarat, gloom and doom of slowdown in festival season

The safest business in Gujarat these days, it can be easily argued, is the manufacture and sale of cheap underwear. Every other enterprise, as data and anecdotal evidence suggest, is fraught with risks of huge losses and eventual failure.

While politicians and bureaucrats still debate if Indian economy is stuttering — finance minister Nirmala Sitharaman, incidentally, believes it is a figment of imagination — the state of Gujarat is living the horror of one of the biggest slowdowns in the history of independent India.

Its traditional business are folding up under the pressure of declining demand, mounting liabilities and inventories and a huge shortage of working capital. Every industry that was once synonymous with the ‘Gujarat model’ of development — petrochemicals, textiles, diamonds, auto-parts — is reeling under the devastating effect of a systemic slowdown that is likely to last for at least few more quarters, if not fiscal years.

Even god is suffering, says Ketu Shah, who runs Ahmedabad-based event management company Marketing Unlimited with his wife. He is witnessing an unprecedented cut in the money corporates and individuals spend on socio-religious events. 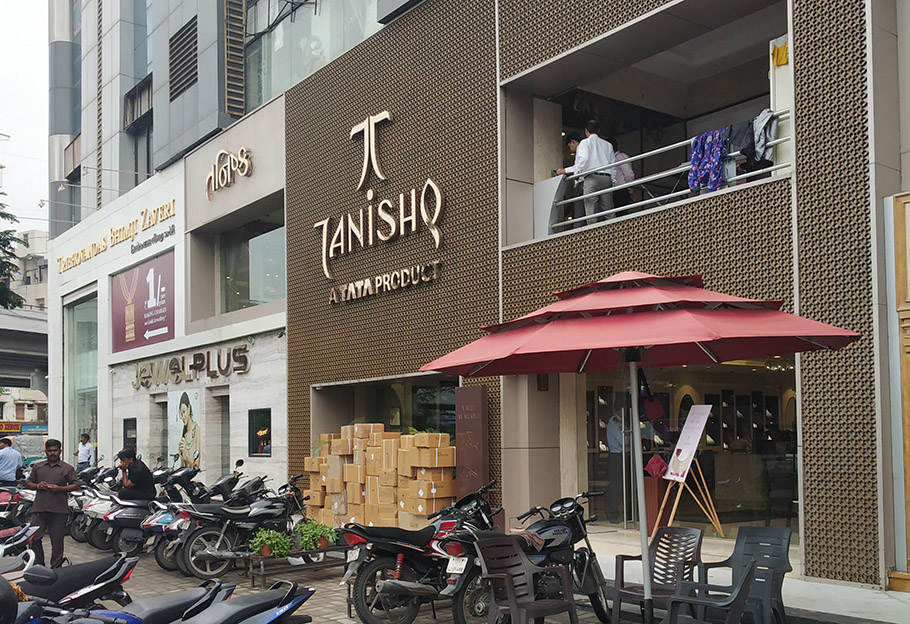 “Till a year ago, temples, corporates and rich individuals used to spend lots of money on religious events during the festival season. This year, we’ve not got a single enquiry for a big-ticket event,” he says, as we discuss the state of economy in his Thaltej home abutting Ahmedabad’s Sarkhej-Gandhinagar highway.

Everyone has a story of gloom and doom to narrate.

A Vadodara ophthalmologist, who doesn’t want to be named, says he made a blunder by investing ₹4 crore in a brand new phacoemulsification machine for cataract operations. “We were always taught to believe that people will never stop spending on two things — healthcare and education. Can you believe this — the number of my patients has fallen by 30 per cent this year?”

In the posh localities of Ahmedabad and Surat, where debates before the marriage seasons were generally on which destination wedding to attend — Seychelles, Mauritius or Bali — and which ones to reject, the question now is, will there be even a single invite to a decent place this year as people settle for less ostentatious weddings?

Till a year ago, temples, corporates and rich individuals used to spend lots of money on religious events during the festival season. This year, we’ve not got a single enquiry for a big-ticket event
Ketu Shah, Marketing Unlimited

“In the festive season, we used to talk about how much we will make. Now we worry about how many we will fire from our staff,” says Narsibhai Patel, president of the Ahmedabad Diamond market association.

A few weeks ago, a delegation of Gujarat’s entrepreneurs met a finance ministry delegation led by RBI governor Shaktikanta Das in Mumbai to discuss the state’s economy.

At the meeting, a senior official of the State Bank of India grandiloquently announced he had enough liquidity for fresh projects. A Gujarati entrepreneur who was part of the delegation burst out at the official: “New projects? Are you living in some La La Land? We don’t even have the money to sustain our existing business. From where do we gather courage to take new risks?”

I All fall
down

Sunil R Parekh is a veteran of Gujarat’s industry. He has advised hundreds of start-ups and established businesses in the past four decades. At present, he is co-chairperson of the Gujarat Chamber of Commerce and Industry and an advisor to pharama major Zydus Cadilla. Sitting inside his Ahmedabad office, he narrates dozens of anecdotes to highlight the stress and depression among entrepreneurs.

“There is no dhanda (business), only desperation and insecurity,” he says.

Parekh says that there are around six lakh micro, small and medium enterprises in Gujarat. More than 60 per cent of them are caught in the cycle of cash crunch, low demand and rising debts; they are unable to service. “Everyone can see that big players are falling. But there has been a cascading effect on almost every business,” he says.

The dip in sales of automobiles, for example, has impacted the forging and foundary business in Gujarat. “The revenues from this sector are down almost 25 per cent,” he says.

The slump in the real estate sector — it is burdened with 11 quarters of unsold inventory — has hit 253 businesses that were providing the raw material for the housing sector. Their old bills are still stuck and new orders are just not materialising.

Meanwhile, non-performing assets of banks almost doubled to nearly 6.5 per cent from 3.45 in 2014-2015. And Mudra loan defaults stood at a whopping 34 per cent in the last quarter of 2018-19, according to the Gujarat State Level Banking Committee.

This data requires a bit of deconstruction to understand the Gujarat model of slowdown. In theory, the banking industry should have been growing because of two steps taken by the Indian government over the past three years — demonetisation and implementation of Goods and Services Tax (GST).

Their combined effect should have pushed businesses towards the formal banking sector for loans, advances and deposits.

The fact that the banking industry is not growing in spite of the destruction of the kuchcha economy is an indicator that businesses are struggling — they neither have the ability to borrow nor the reason to invest.

Similarly, the decline in deposits shows that savings have fallen and, by inference, incomes have crashed. And finally, the Mudra loan defaults show small and medium entrepreneurs are getting crushed.

In the festive season, we used to talk about how much we will make. Now we worry about how many we will fire from our staff
Narsibhai Patel, president, Ahmedabad Diamond market association

Tax collections, another indicator of the fiscal health, have been much lower than estimates. According to industry estimates, in the first quarter of this year, the government has realised just around 80 per cent of the original GST estimates. The local entrepreneurs are now complaining of tax terrorism by government to mop up more revenue in a falling economy.

Gujarat’s economy is primarily built around manufacturing. It is one of India’s biggest hubs for textiles, auto parts, petrochemicals and pharma products. Gems and jewellery, especially diamonds, is its other traditional business. The manufacturing units of Gujarat generate 20 per cent of the total employment, the highest among all states, according to NSSO data.

In June 2019, manufacturing across India grew by just 1.2 per cent. The industry had averaged almost 6 per cent during since 2006, touching 24.5 per cent in the first quarter of 2007. Naturally, Gujarat has been among the worst hit. 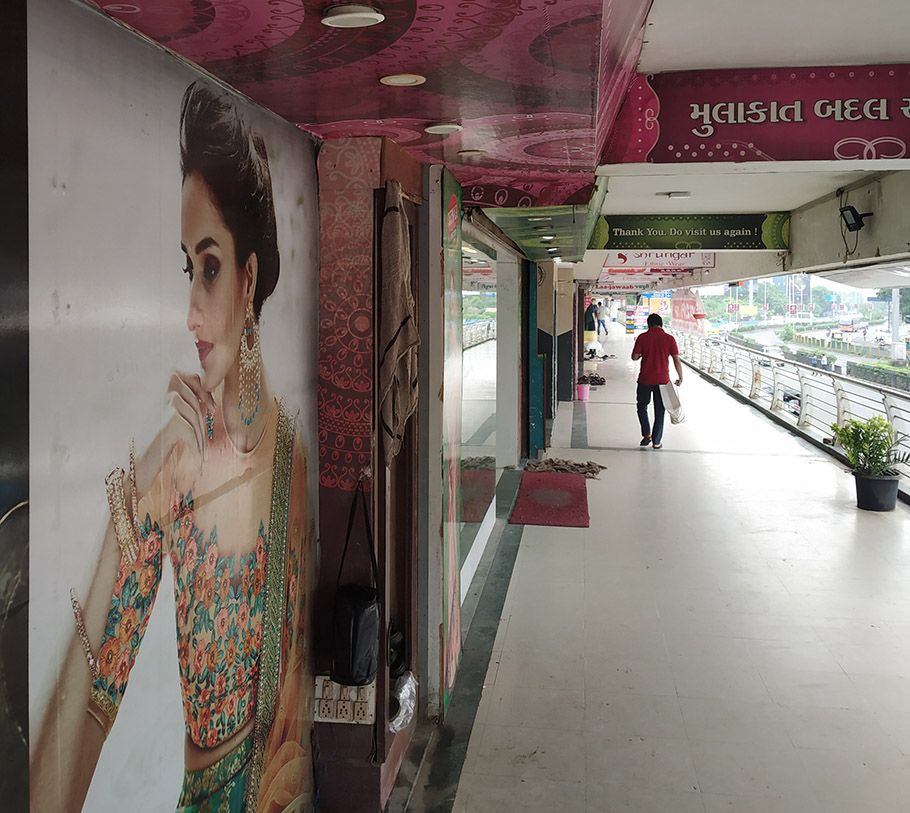 Gujarat’s textile industry, for instance, is facing its worst crisis in decades. Its plight is underlined by the industry bellwether Arvind Mills, the Ahmedabad-based textile giant, which is trading at its 52-week low on the bourses because of a steep fall in earnings and a bleak outlook for the future.

This fall is a consequence of a 24.15 per cent fall in cotton textile exports and 34.57 per cent decline in the exports of cotton yarn from India. Since Gujarat — apart from Tamil Nadu — is the base of the textile industry, the steep fall has hit its entrepreneurs the most. 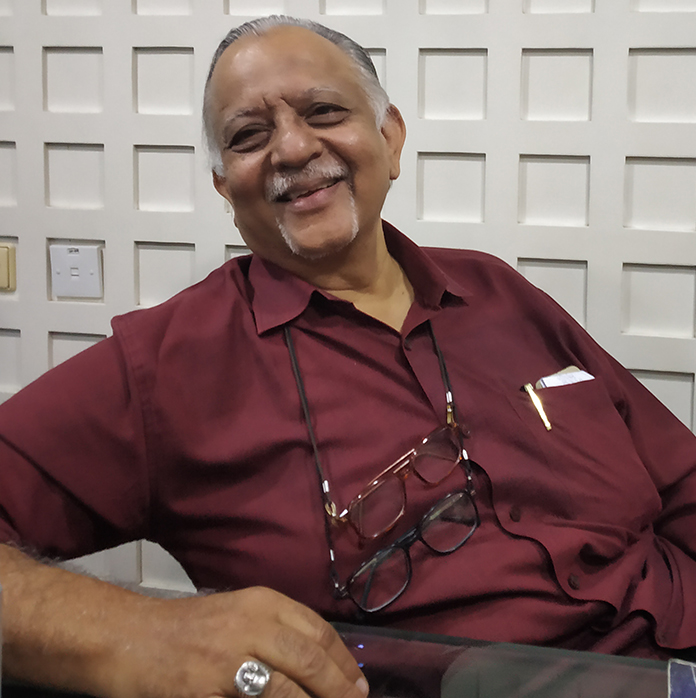 There is no dhanda (business), only desperation and insecurity...Everyone can see that big players are falling. But there has been a cascading effect on almost every business
Sunil R Parekh, co-chairperson, Gujarat Chamber of Commerce and Industry

Saurin Pathak, a Surat-based yarn manufacturer, says, “The textile industry is on the verge of a catastrophe. At its peak, the sector employed 4-5 lakh people. But, the drastic fall in demand has led to closure of many units. At least 10 per cent of the work force has been laid off. It is going to get worse — if demand continues to fall, who will buy the cotton bales produced by farmers?”

Parekh argues that Gujarat’s textile production — a robust 12 per cent of the country’s total — is facing an existential crisis. “The Asean countries have eaten into our exports because of their superior quality and low input cost. Gujarat’s cloth industry would be ruined if something is not done to add value to the local products.”

August is traditionally a season of hope, optimism and celebrations in Gujarat. A bountiful monsoon turns its fields lush green with the promise of a bumper harvest. A spurt in demand for consumer goods during the festive season sends its manufacturing units and export hubs into overdrive. So, when the garba season comes to Gujarat, everyone is in a mood to celebrate.

This year, there is absolutely no demand for booking bigger venues for garba and dandia events. Industry insiders say that owners of ‘party plots’ — huge stretches of land in the middle of the city reserved for celebrations — used to earlier demand exorbitant amounts of money for public events. This year they are chasing event planners for business, even if it is just a birthday or a kitty party.

Shah, whose event management business requires him to deal with dozens of entrepreneurs every days, says the mood in Gujarat is sombre and of wait-and-watch. “People are just sitting tight on whatever they have, hoping that bad times won’t last forever and business will be booming soon.” But, he feels there is still two more years of pain left.

The textile industry is on the verge of a catastrophe. At its peak, the sector employed 4-5 lakh people. But, the drastic fall in demand has led to closure of many units
Saurin Pathak, yarn manufacturer

In this milieu of fear, uncertainty and falling incomes, the silver linings of optimism are few. “Low-cost housing is one of the viable businesses because of the social welfare spending by the governments at the Centre and in Gandhinagar. My driver, gardener and maid all have their own house now,” says Parekh.

Shah says that among all his friends and acquaintances, just one person is unaffected by falling demand. “This friend makes cheap underwear in Naroda. His sales are robust.”

The message is clear: People are buying only what is absolutely necessary. And even for their bare necessities they are looking for the cheapest alternative.