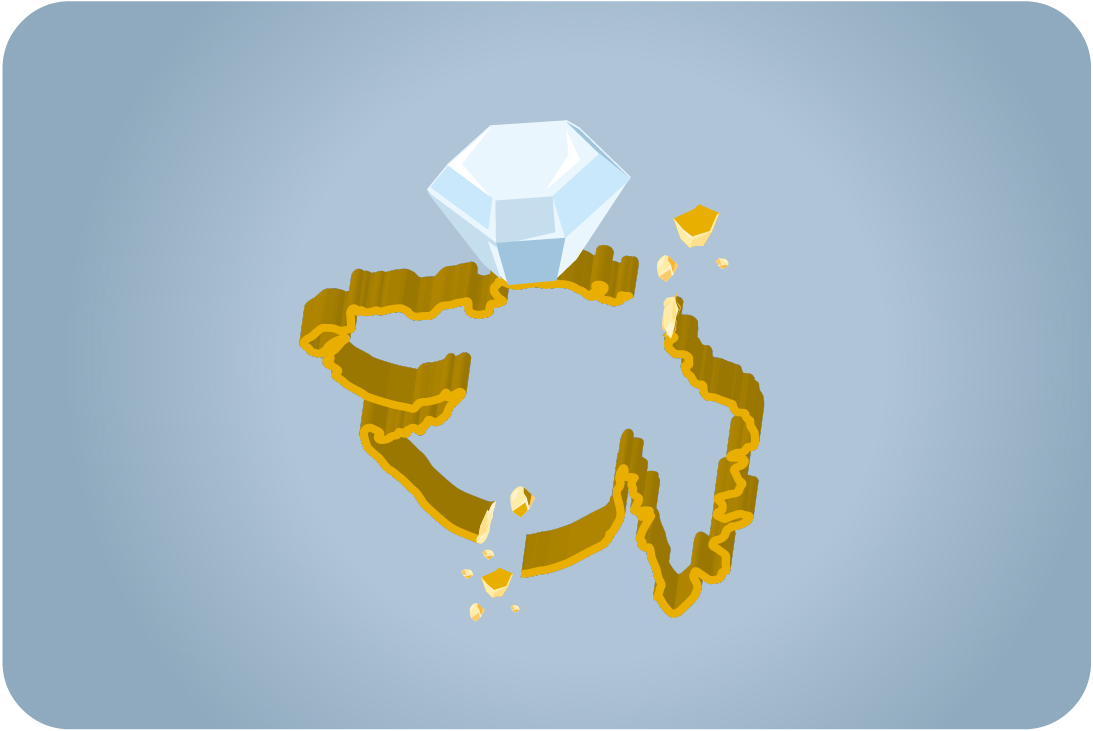 No longer dear, diamonds give Gujarat traders nothing to cheer

The only thing that stands between Maganbhai V Patel’s two sons and their marriage is diamonds. Diamonds may be a girl’s best friend, but now, traders of the precious stones are the last choice as husbands.

“Earlier girls used to blindly marry boys from families of diamond merchants. Now the invisible board outside every girl’s house is: diamond dealers needn’t apply,” he grumbles.

Maganbhai is the secretary of the Diamond Market Association of Ahmedabad, a fortified bourse in the city’s Bapu Nagar area. Entry to the market is strictly regulated by burly guards at its gates — only pass holders are allowed. But, once you enter it — through reference — the irony makes you laugh.

“Till a few months ago, this used to be a bustling market of buyers and sellers. Traders used to open their shops at 8 AM and do brisk business by noon. Now, nobody comes here till 2:30 pm, and that too only out of habit. Business is not even das taka (10 percent)
Maganbhai, secretary, Diamond Market Association of Ahmedabad

The sun is beaming bright overhead. Outside, the roads are bustling with unruly drivers bent on jumping traffic signals in a rush to reach work. But the diamond market is completely empty. Except for a few men yawning in their seats, there is no hint of life. The only sound is of pigeons cooing. So what exactly are the sentries guarding?

“Till a few months ago, this used to be a bustling market of buyers and sellers. Traders used to open their shops at 8 AM and do brisk business by noon. Now, nobody comes here till 2:30 pm, and that too only out of habit. Business is not even das taka (10 percent),” Maganbhai laments.

Empty bourses, vacant markets, silent machines and idle traders tell the story of the diamond industry this year. In the diamond polishing hub of Surat and Ahmedabad, owners have either shut down their polishing units or are operating in just 4-hour shifts. In the posh markets, sellers are offering discounts, buybacks and finance schemes to revive an industry that’s almost dead.

A prominent jeweller in Ahmedabad’s Shivranjani area says he is ready to sell his products in 12 instalments, the last of which is to be borne by him. But, he says, “dhanda nathi (no business)”. 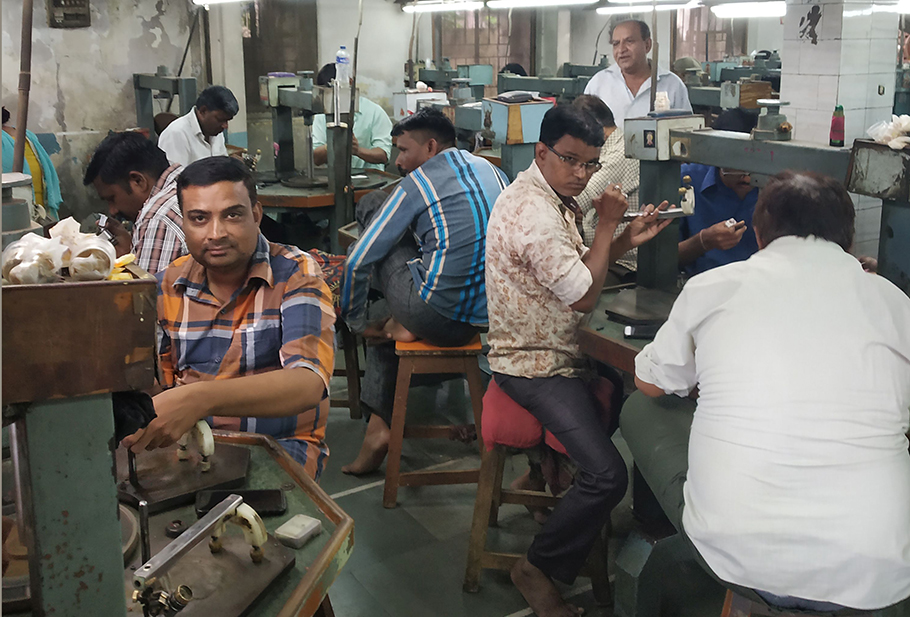 Yogeshwar Gems and Diamonds' factory owner Rameshbhai Mangukiya says he is still running the factory with around five dozen artisans because if he shuts down, they had nowhere to go.

At Yogeshwar Gems and Diamonds, Ahmedabad, around five dozen artisans are sitting silently in front of their polishing tables. Some of them are peering at stones through magnifying glasses. From behind a glass in his cabin, the factory’s owner Rameshbhai Mangukiya is staring at his workers wistfully.

“Do you know why I am still running this factory?” he asks when questioned about his business. “I am doing it for them—my workers. If I stop, they will have nowhere to go. But, I am not earning even a penny, just incurring losses.”

Like several other diamantaires, Mangukiya has no running capital left. Payments are stuck since over 120 days. Banks are not lending. “Nirav Modi (the trader who fled India after defaulting on loans) hai to asambhav hai (Because of Nirav Modi, nothing’s possible),” is the common refrain — and new orders have dried up completely.

“I can run this factory for one more month. After that there will be a lockdown till god knows when,” he says.

I Once Upon A Time
in Gujarat

In Gujarat, diamonds may not be for everyone. But, they are connected to almost everybody’s livelihood. It is one of the biggest money-spinners in Ahmedabad, north Gujarat and Saurashtra. Except for Vadodara, every big city in Gujarat boasts of more diamond shops than paan and chai (betel and tea) stalls. “You throw a stone and it will hit someone related to the trade,” joshes Maganbhai.

Since this is largely an unorganised sector, reliable data is not available. Industry estimates suggest at least a crore people are dependent on the diamond trade. The chain starts right at the village level where farmers, housewives — anybody with good eyesight and hands — polish stones for an additional income. The polished diamonds are then sent to traders, who, either sell them to buyers from Mumbai or fit them in gold jewellery. The finished products are then sold at showrooms.

This year the entire chain has collapsed. Narsibhai Mehta, president of the Diamond Merchant’s Association in Ahmedabad, says over the past six months, trade has collapsed. In Surat, diamond traders have shut down 20 per cent units and retrenched at least 40,000 workers, says Babu Gujarati, a member of the Surat’s diamond traders association. 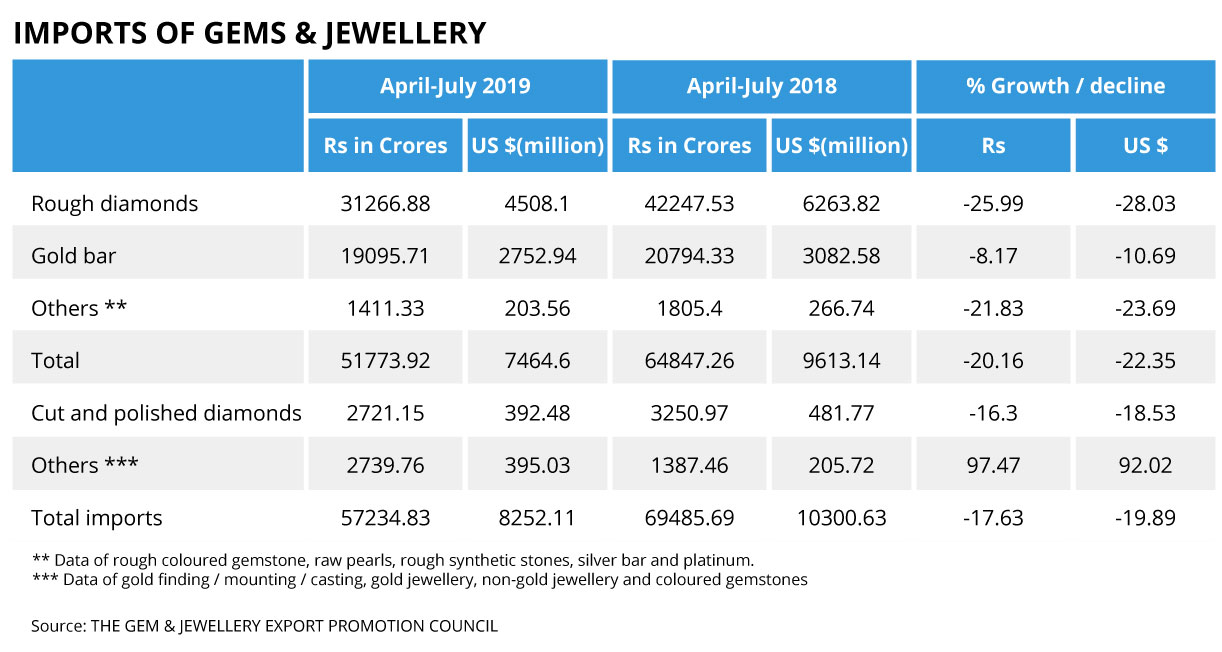 Many traders are yet to open their shops and factories after the summer vacation. Those who are still in business are operating at less than 50 per cent capacity. In the market, there are rumours of two big players going bankrupt, taking down with them hundreds of small traders and thousands of workers.

On Surat’s Varachha Road — a glitzy hub of textile and diamond trade — there are hushed tales of distress sale by big players. “Traders are selling their stocks at 10-15% less than the landing cost to raise working capital,” says Hansmukh Patel, a trader. His own income per month, he says, has plummeted to less than ₹25,000 from the highs of ₹50,000 a year ago. “I am just about surviving.”

Unsold inventories are building up on Surat’s bourses. Imports of rough diamonds — a barometer of demand — have been falling consistently since the start of 2018, according to data put out by Gem and Jewellery Export Promotion Council.

In anticipation of a bigger fall in demand, De Beers, the South African mining giant has cut production after registering 44 per cent fall in sales.

“Diamonds are for those with money to burn,” says Maganbhai, “not for those struggling to survive.” These days, as the economy enters a period of sustained slowdown, everybody is fighting for survival. So, nobody is buying diamonds.

For 20 years. Mangukiya has seen orders pouring in during the months of August. “This is the season for supplying diamonds for Diwali in India and the Christmas season in Europe. This year, I am still waiting for my first order,” he says, adding that this meltdown is unprecedented. 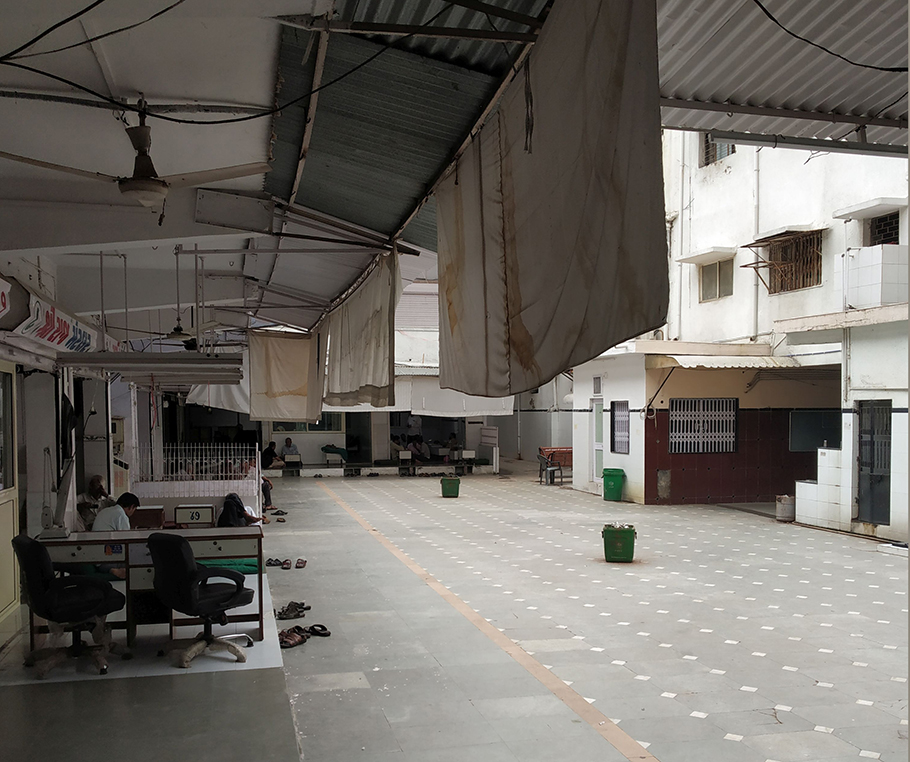 The diamond market in Ahmedabad's Bapu Nagar is empty except for a few men yawning in their seats. The only sound heard here is that of pigeons cooing.

The other big buyer of diamonds — China — is not placing orders because of its domestic problems. Indian exports to mainland China are routed through dealers in Hong Kong. Because of the ongoing protests in Hong Kong, the diamond trade has come to a standstill.

Sunil Parekh, co-chairperson of Gujarat Chamber of Commerce and Industries, argues that consumers have become smarter these days. “Anybody can rent jewellery these days. For a small sum, people can flaunt diamonds they would have spent a fortune on buying. Smart money is into renting, not buying. So, domestic demand is falling.”

Amidst this gloom and doom, Maganbhai is happy with a choice he made some months ago. “I am in late 50s. My life is in its final phase. But, I am taking my sons out of this business. One of them will produce nutrition products. The other will get into construction.”

“They now have a good chance of getting married,” he smiles.