The Indian equity markets have been on a tear lately, with the benchmark Sensex scaling the 60,000-mark on Friday, September 24, for the first time, boosted by strong liquidity flows and investor optimism of a continued revival in the economy from the COVID-induced slowdown. Though some market analysts are confident that the rally will sustain, concerns linger over high valuations.

So should the recent bull run cheer investors or is there a need for caution? 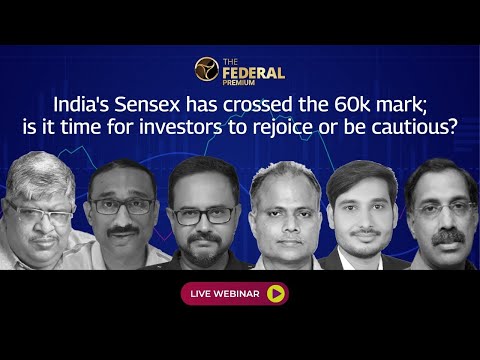 What is powering the bull run?

The general consensus among the eminent panelists was that the bull run was being powered by, among other things: an increase in retail participation over the past 18 months; the liquidity sloshing around in the system; and generous corporate tax cuts.

Srinivasan said the rally is being driven primarily by retail money. “Banks are offering record low interest rates. People are not making money on gold, bank deposits or real estate, so they are investing in stock markets. But most people don’t understand stock markets,” he said.

He also singled out the strong performance of commodities stocks and tax cuts for corporates – “money that is not being reinvested” – for the recent market performance. “All this is adding to corporate profits and so things are looking rosy for the moment. But US is likely to soon start deleveraging and money will tighten. The end will come, but we don’t know when.”

Nandy said that in September 2019, the Indian economy was arguably in a worse place than it was in 1991. “The GDP for the September 2019 quarter had slipped to 4.5 per cent, the lowest since 2013. Demand and investment were at a six-year low, manufacturing at a 15-month low, exports were decelerating, banks were saddled with non-performing assets, and core sector companies with untenable debt. After the collapse of IL&FS, shadow banks too had begun to unravel. The worsening macroeconomic situation made the foreign portfolio investors flee the Indian capital markets.”

In the midst of all this, Prime Minister Narendra Modi was scheduled to hold two round tables with the captains of corporate America during his visit to the United States in late September 2019, he said.

“On September 20, 2019, less than 40 hours before the Modi’s Houston event, the government announced a massive tax rate cut, lowering the base corporate tax rate to 22 per cent from 30 per cent, and to 15 per cent from 25 per cent for new manufacturing companies. The rate cut meant a reduction of almost ₹1.5 lakh crore in direct tax collections,” Nandy added.

This ₹1.5 lakh crore was instantly added to the bottomline of corporate India, he said. “And you and I are bearing the brunt of this decision.”

Alagusundaram was cautiously optimistic, saying there is a “little more steam left in the market”.

“I wouldn’t be surprised if it touches 64K in the next four or five months,” he said, adding that any dip of 5 per cent to 10 per cent would be a buying opportunity.

“I still feel metals will rally further. Autos have been subdued. But they have started moving up. I don’t see any reason for a major selloff.”

Alagusundaram was bullish on mid- and small-caps stocks, but warned that “IT could take a pause”.

The US Federal Reserve, the European Central Bank and the Bank of Japan have together pumped in about $14 trillion in the markets, Arun TK said. “This bull run is being driven by liquidity. How long will it sustain?”

Arun said the markets could see volatility in the near future as the Fed begins to wind down asset purchases. “In Europe this process has already started.”

He said investors should focus on geographical diversification – that is invest across geographic regions to reduce risk and improve returns.

However, Arun conceded that this option may not be readily available to small retail investors in India.