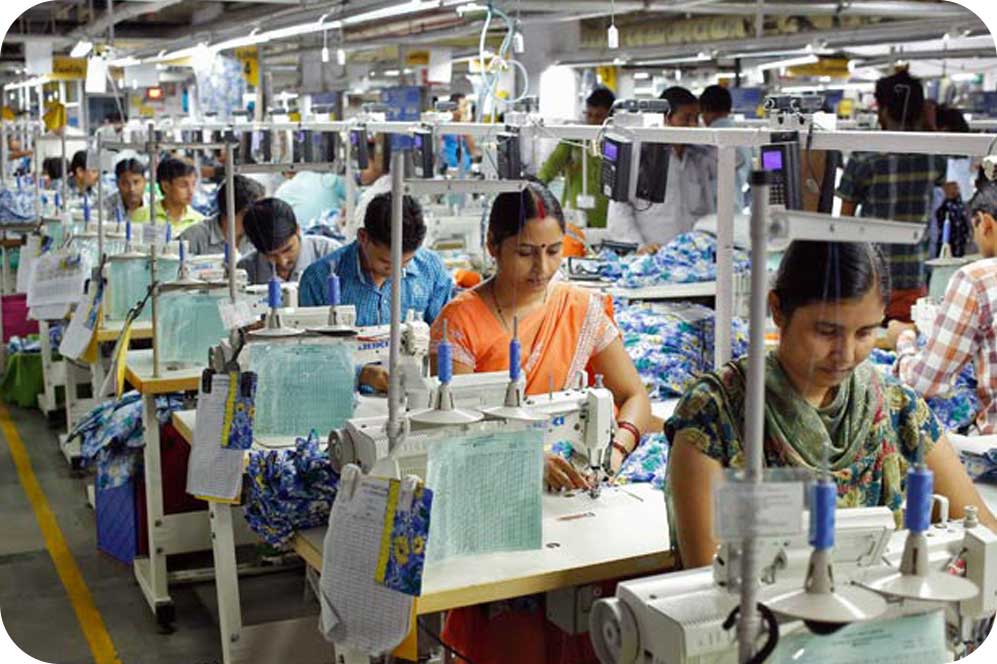 The textile industry of Tirupur, famously known as the knitwear capital of the country, which once churned out cotton wear for the entire country, now grapples with low production, declining demands, delayed payments and labour layoffs. Many spinning mills that ran round the clock have temporarily shut shop due to low market demand and workers in several units have been sent back home until the situation normalises.

Cotton wear manufacturers in Tirupur and nearby Coimbatore, say the poor market conditions is a product of many factors – the NDA government’s imposition of GST and demonetisation, slumping export rates of yarn and a spreading scare among consumers of an “economic slowdown” that discourages people from spending.

They however are optimistic that the market will survive this period of depression and revive, provided the Centre introduces small yet significant reforms in its domestic and global trade policies.

Tirupur exporters’ association president Raja M Shanmugam who admits that there has been a steady decline in the export of yarn in the past few months, says the slowdown in the domestic market is a mere fear. “Since there is a common perception that there is an economic slowdown in all the sectors of Indian economy, people are scared to purchase products, creating low demand in the market and forcing us to produce less and stock more,” Shanmugam said.

Textile traders say that although the industry goes through ups and downs every now and then, the current slump in export figures is alarming. “There has been a 30 per cent decline in the export of yarn just in the last one year. Last year, the export of yarn crossed ₹ 26,000 crore while this year it was just around ₹4,000 crore till April,” Shanmugam said.

“The reason behind the falling export figures is the increase in cotton prices in the Indian market. Cost of other raw materials and labour further inflate the cost of yarn, making it much costlier in the international market and rendering us less competent among global textile manufacturers,” he explained.

Although export of cotton apparel is stable, the numbers have especially dipped in regards to yarn, says A Sakthivel, senior industrialist and Apparel Export Promotion Council’s vice chairman and founder of Tirupur Exporters Association.

Apart from demonetisation and GST, Shanmugam points out that the Centre had cut down 4 per cent export subsidy that the textile sector used to enjoy. "We were told that the 4 per cent subsidy would be transferred to us through some other scheme. But, it is yet to materialise,” Shanmugam said.

But, once it is materialised, the industry may regain its normal state, he added.

Many traders say the government can still make amends by making policy changes based on current global developments.

“Now that the United States has levied 15 per cent retaliatory tariff (or import quota) on Chinese products, there is a scope for the Indian textile industry, (which according to Indian Texpreneurs Federation currently holds a share of 4 per cent against China’s 33 per cent in the US textile market) to occupy a bigger space in the US market. But, as the order has come to effect only from September 1, it would take time for Indian industries to receive the order,” says Prabhu M Damodharan, convener of Indian Texpreneurs Federation.

Damodharan, however, says that India, which is primarily a producer of pure cotton, will have to make a few changes in its textile production to gain entry into the US market, which is more favourable to man-made (or artificial) fibre.

Since there is a common perception that there is an economic slowdown in all the sectors of Indian economy, people are scared to purchase products, creating low demand in the market and forcing us to produce less and stock more
Raja M Shanmugam, president, Tirupur exporter’s association

“We should also try our hands at producing manmade fibre which holds over 80 per cent of the market in the US. But there are more hurdles before that could be achieved. Even if textile manufacturers attempted to switch to manmade fibre, the Union government’s 18 per cent GST on the fibre would still raise its price in the global market,” Prabhu says.

This means, to get a hold of the American market, the Indian government will have to reduce its GST on manmade fibre, if it has to save the slumping textile industry, say manufacturers.

“The 18 per cent share that China will lose due to the levying of the retaliatory tariff by the US, will not be shared by other countries too. We should be able to grasp that opportunity,” Prabhu stresses.

Traders say another measure that could save them from further losses would be by exempting cotton from import duty.

“In order to support the farmers, the Union government has fixed a minimum support price for cotton (at ₹5,450 per quintal). But when demand increases, cotton prices shoot up to over ₹50,000 per candy (one candy = 356 kg of ginned cotton) and become unaffordable. So, if the import duty is reduced or exempted, it would be helpful for the traders,” Shanmugam says.

Now that the US has levied 15 per cent retaliatory tariff on Chinese products, there is a scope for the Indian textile industry to occupy a bigger space in the US market.
Prabhu M Damodharan, convenor, Indian Texpreneurs Federation

Prabhu says increasing the yield per hectare in cotton farms too could provide a permanent solution to the steep cotton price. “Cotton is costly because of its high demand and low yield. As far as other countries are concerned, they grow about 600-1,300 kg of cotton per hectare, while in India the production is between 300 and 700 kg per hectare. So, if the yield is raised, the prices would automatically come down,” he says.

Sakthivel is confident that export figures will go up by the end of the year. He hopes the next cotton year (October 2019 to September 2020) will bring more yield to revive the textile industry.

Now that the festive season has begun, a cross section of textile manufacturers that The Federal spoke to were hopeful that the domestic industry would revive when people loosen their purse strings for the festivals.

“We just had Vinayagar Chathurthi which will be followed by many other festivals in the coming days. Until Deepavali, the domestic market would grow. Now, even though the people have money, they are not in a mood to purchase anything, fearing that they would run out of money when they are in urgent need. But, for the festivals, they will spend at least by borrowing money,” hopes R Chidambaram, owner of a garments unit in Tirupur.