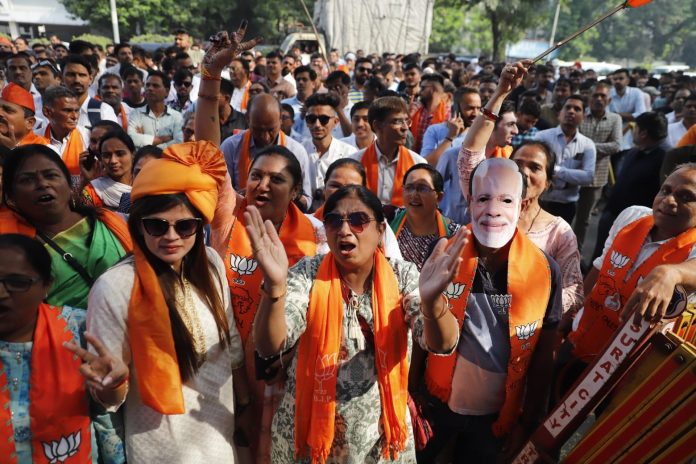 Celebration by BJP workers in Ahmedabad

The BJP was on Thursday poised for a landslide victory in Gujarat to retain power for a record seventh straight term but was behind the Congress in Himachal Pradesh, which could go with the trend of alternative governments in the hill state.

After the first four hours of counting of votes in the Assembly elections in the BJP-ruled states of Gujarat and Himachal Pradesh, early trends showed that the saffron party with a vote share of nearly 54 per cent was ahead in 152 out of 182 seats in the western state and could surpass its previous best showing of 127 seats in 2002 when Prime Minister Narendra Modi was the CM. The Congress holds the all-time record of 149 seats that it had won in 1985 under the leadership of Madhavsinh Solanki.

In Himachal Pradesh, early trends, which indicated a close fight, showed that the Congress was ahead in 37 of the 68 seats followed by the BJP, which was leading in 28 seats and was hoping to buck the anti-incumbency trend witnessed in the hill state for nearly four decades. Independents were ahead in three constituencies. The AAP, which had fielded candidates in 67 seats, was trailing in all seats.

Banking on the charisma of Modi, who addressed as many as 30 election rallies, the BJP overcame anti-incumbency yet again after being in power for 25 years without losing an election since 1995. It had 99 seats in the outgoing house with a 49.1 per cent vote share.

With its expected huge victory in the home state of Modi and Home Minister Amit Shah, the BJP, which focused on a development agenda, was set to equal the Left Front’s record of seven consecutive terms in West Bengal. The CPI(M)-led Front ruled the eastern state for 34 years from 1977 to 2011.

Catch up with The Federal’s coverage of Himachal polls here. For Gujarat, click here.

Though the opposition took on the Modi government over rising inflation, slowing growth and joblessness, the economic troubles apparently did not dent BJPs popularity in Gujarat that has been a bastion of the party for decades and where Modi was chief minister from 2001 to 2014.

Pulverised by the BJP, the Congress and the Aam Aadmi Party (AAP) initially seemed to be locked in a battle to grab the status of the main opposition party in the state with the grand old party having an edge. The Congress and the AAP were leading in 20 and six constituencies respectively.

While the Congress was not expected to replicate its creditable performance of the last Assembly elections in 2017, a good showing by the AAP could have helped its supremo and Delhi Chief Minister Arvind Kejriwal cement his place as a key challenger to Prime Minister Modi in the 2024 Lok Sabha polls.

In Himachal Pradesh, state Congress chief Pratibha Singh exuded confidence that the results will be in favour of her party.

“We are confident that results will be in favour of the Congress and we will form the government,” she told reporters in Shimla.