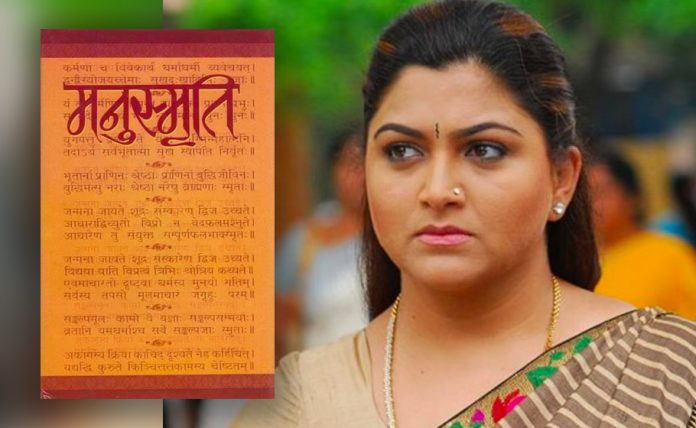 Many would remember how actor-turned-politician Khusbhu Sundar infuriated ‘culture custodians’ when she spoke in favour of pre-marital sex in 2010. At least 22 cases were filed against her (to be dismissed later by the Supreme Court) and chappals and eggs were thrown her way during court appearances.

A decade later, the politician – who so far has been vocal about gender rights, women empowerment and the need to break taboos – has just done the opposite – endorse (albeit indirectly) the Manusmriti under the pretext of fighting for women’s rights.

The actor-turned-politician has accused Tamil Nadu-based VCK leader Thol Thirumavalavan of denigrating women through his remarks on the ancient Hindu text.

During a recent webinar on ‘Periyar and feminism’, the Dalit leader had commented that ‘Manu dharma’ demeans women and treats them as prostitutes.

For the uninitiated, Manusmriti or Laws of Manu is an ancient code of moral conduct or legal text on Hinduism.

The text which reveres women as godly creatures and guardians of dharma, however, presents a rather conflicting view on their rights vis a vis marriage, conduct and status in society.

And not many of these doctrines resonate with rights espoused by gender crusaders like Khushbu in the 21st century. While Thirumavalavan may have gone overboard in calling women as ‘prostitutes’, here are a few reasons why Khushbu should have called out Manusmriti instead of defending it:

A woman cannot be independent

The ancient codebook considers women properties of the father, husband and son, who must be controlled and cannot be allowed to function independently.

By a girl, a young woman, or even by an aged one, nothing must be done independently, even in her own house.” (Verse 147)

“In childhood a female must be subject to her father, in youth her husband, when her lord is dead to her sons; a woman must never be independent (Verse 148, Chapter 2*)

While preaching chastity to women, the book also describes them as seductresses who can lead even wise men astray.

It is the nature of women to seduce men in this (world); for that reason the wise are never unguarded in (the company of) females (verse 213, Chapter 2)

For women are able to lead astray in (this) world not only a fool, but even a learned man, and (to make) him a slave of desire and anger verse (214, Chapter 2)

The text clearly cuts out the role of a woman – she should be loyal to her husband, worship him as a ‘god’ and devote herself to his services, household chores and in continuing the progeny.

According to the text, a woman who lives up to the laws is considered a ‘good woman’, while one who “violates her duty towards her husband, brings on herself disgrace in this world”.

The laws leave no opportunity for divorce or widow remarriage.

A faithful wife, who desires to dwell (after death) with her husband, must never do anything that might displease him who took her hand, whether he be alive or dead.157At her pleasure let her emaciate her body by (living on) pure flowers, roots, and fruit; but she must never even mention the name of another man after her husband has died (verse 156, Chapter 5)

She who, controlling her thoughts, words, and deeds, never slights her lord, resides (after death) with her husband (in heaven), and is called a virtuous (wife) (Verse 29, Chapter 9)

It ironically allows a woman to have sexual intercourse with a brother-in-law to beget child.

On failure of issue (by her husband) a woman who has been authorised, may obtain, (in the) proper (manner prescribed), the desired offspring by (cohabitation with) a brother-in-law or (with some other) Sapinda (of the husband). (Verse 60, Chapter 9)

Women, according to the legal text, should also be controlled to keep caste hierarchies intact.

A ‘shudra’ (lowest of the four varnas in Hinduism) who has intercourse with a woman of a twice-born caste (varna), guarded or unguarded, (shall be punished in the following manner): if she was unguarded, he loses the part (offending) and all his property; if she was guarded, everything (374)

A man, aged thirty years, shall marry a maiden of twelve who pleases him, or a man of twenty-four a girl eight years of age; if (the performance of) his duties would (otherwise) be impeded, (he must marry) sooner. (Verse 94, Chapter 9)

(*The Law of Manu, George Buhler)

Politics or lack of educational choices behind murder of two Dalit y...

In Hindutva vs Dravidian nationalism, where does Dalit politics stan...

Manusmriti: Why the ancient text continues to stir controversy