The US crude oil futures called WTI or Western Texas Intermediate for May traded in the negative territory for the first time in history on Monday.

The WTI crude price, considered benchmark for American oil, on a single day fell close to $55/barrel and landed the negative price as deep as -$37/barrel. This effectively means anyone who bought the contracts at that price would not only get free oil but also money in return!

This was unique to WTI prices; that too for May delivery only as June prices were still trading at about $20/barrel. This because some oil companies and traders were desperate to pass the contracts off their hands as there was virtually no way they could take physical delivery of oil as the storage capacities were near full in the US, especially with the stockpiles at record levels in Cushing, Oklahoma. 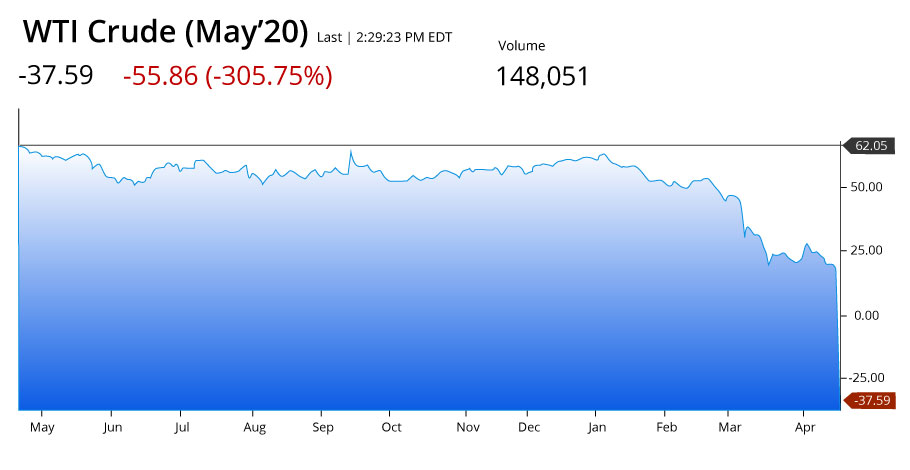 The COVID-19 triggered lockdown across the world had set off a steep decline in demand as most of the transportation sector, be it surface or air, one of the major consumers for fossil fuels, are stranded across the world. The prices crashed because of supply glut.

This doesn’t mean if you go to your gas station you would get free gas and some cash in hand. This is more of a technical problem in the futures market as oil is usually traded for delivery in future; so in the absence of real demand in the near term due to lockdown, those who are long on oil started panic selling to get rid of their obligations to take delivery.

This is more akin to some airline companies offering cash reward to those who would like to offload and board in a later flight when they are overbooked at times. The real problem in the US markets faced by these companies is the lack of storage capacity as most tankers are already booked and there aren’t any new pipelines to evacuate gas.

For instance, VLCC (Very Large Crude Carriers) tankers’ day rates have tripled to close to $100,000 per day from what it was a year ago for six months to one year contracts, and the market cap of tanker companies have been surging quite inversely to the fall in oil prices.

The fall in demand is definitely not a sudden phenomenon. If any, the demand has been peaking for quite some time due to a multitude of factors that we had seen earlier. COVID-19 has just exacerbated the demand fall.

What does this mean to India? We largely benchmark Brent oil extracted from the North Sea whereas WTI is index for oil extracted from American oil fields. Brent is international benchmark covering two-third of the global market largely represented by OPEC countries from whom India imports its oil.

Does it have any implications for Indian oil? Not directly, but according to investment companies Brent is sensitive to geopolitical developments. India imports 85 per cent of its requirements and therefore it is right opportunity to stock up.

Will this result in fall in petroleum prices in India? Unlikely, as it is only a technical issue in the US crude futures market.

Meanwhile, the global oil demand has been falling for a while. The first major reason was the bombing of Aramco’s oil installations last September in eastern Saudi Arabia with the help of drones allegedly by Iran-backed Houthi rebels.

Despite the unthinkable happening, oil prices didn’t surge as much as there was enough supply to back the temporary outage. There wasn’t any immediate retaliation by either Saudis or their ally US to such a daring act by the aggressors, except for some additional sanctions on Iran.

In January 2020, when the US killed Iranian General Qasim Soleimani in Baghdad, through a drone strike, the markets didn’t even flutter as once again both the countries just backed off after some sabre rattling.

The second major blow was the IPO by Saudi Aramco which made it the most valuable company in the world at $1.7 trillion, well short of the $2 trillion mark they were aiming in December 2019. That the Saudis would eventually start selling their family silver was clear evidence that they are now looking beyond oil in future.

However, it was the supply side adjustments that weren’t taking place in line with these as growing tensions between US and Russia, and revival of shale industry in the US after the 2014 oil price fall, have all contributed to the reckless push in supplies among nations trying desperately to hold on to their market shares.

On March 9, 2020, amid the COVID-19 crisis, Saudi Arabia said they were going to ramp up production further as Russia didn’t agree to any cuts in production. This triggered the first great slide this year as markets around the world were shutting down.

A further truce earlier this month between the OPEC and other major producers, nudged by US President Donald Trump, to make an unprecedented 10 per cent cut in production by May (close to 9.7 million barrels a day), still failed to prop up the prices which were trading sub-$30/bbl level most of the time. The real reason being the actual fall in demand is a staggering three times of this cut!

Yet not everything is bleak as futures prices beyond this autumn and further are still holding as most people expect the economic activity to resume soon, and the demand to come back to decent levels if not the original ones. The challenges going forward, apart from the uncertainty in terms of how long would it take for full economic recovery, are the difficulties in supply side corrections.

Many of the small and medium companies cannot easily shut down production due to multiple reasons, like technical issues in closing a well, the pain in resuming operations later (especially if you are landlocked), consequences of early termination of contracts or non-fulfilment of obligations both to counter parties as also to regulatory bodies and licensing authorities, and many such. However a 2-3 million barrels a day cut in production this year is inevitable for them. This means, to a large extent, it is dependent upon how the US would negotiate with OPEC and Russia on managing the rest of the production cuts.

Trump could threaten with more tariffs on oil imports to protect his domestic industry or alternatively this could pave way for releasing Russia from sanctions in return for cut in their production. Perhaps, this is why Russia has been pushing up production to get to the negotiating table with Trump to get out of the sanctions. So another major production cut would be in the offing, led by Saudis and Russia to balance the supply to the real demand to revive prices.

Aramco and Russian oil majors together can eye to buy many small and medium oil companies in the US and rest of the world whose share prices are at record lows anyway, to consolidate their positions further. With the money raised during IPO, Aramco could literally go and shop companies around the world now. More mergers and acquisitions among producers and service companies would pave way to further consolidation to balance the markets as more bankruptcies will be filed.

At the moment though, the future of oil hangs precipitously in the hands of three powerful men – Trump, Russian President Vladimir Putin, and Saudi’s Crown Prince Mohammed bin Salman.