In 1954, with the status of Kashmir’s integration with India still hanging in balance because of the conditions of its accession, the government of India used Article 370 of the Constitution to give special status to Jammu & Kashmir.

Apart from giving the state a degree of autonomy, the new provisions limited Parliament’s powers to make laws for the state. It allowed India only to control three subjects— defence, external affairs and communication.

On Monday, August 5, the government bifurcated the state, declared J&K a union territory and stripped the state of its special status by removing most of the provisions of Article 370. Home minister Amit Shah announced that this was being done under Article 370(3) that provides that “the President may, by public notification, declare that the article shall cease to be operative.”

The decision has the potential to create chaos in the state, especially north of the Banihal pass that separates the Valley from the rest of the state. It can also lead to a Constitutional crisis because of the history of the Article and the state’s integration into India.

To understand the importance of Article 370, a brief detour into history is important.

One autumn morning in 1947, Mohammad Ali Jinnah decided that to heal his weary body and collapsing lungs, he needed to make his fifth visit to Kashmir.

Jinnah presumed that the plan to visit the Valley would not face any hurdles. Kashmir till then was a princely state. Its ruler Hari Singh had still not made up his mind on acceding to India or Pakistan. For him, the idea of keeping Kashmir independent, a tiny tourist haven nestled in the Himalayas, was more tempting. So, the Qaid-e-Azam of Pakistan thought, he could always visit what the Mughal monarch Jahangir had called heaven on earth, like any other visitor.

To his horror, his request was denied by the Dogra ruler of Kashmir, prompting Jinnah to commission a tribal invasion of Kashmir. When the tribals, led by Major Khurshid Anwar, a man cashiered from the Indian army for embezzling funds, failed to reach Srinagar in spite of a clear, unsecured passage, Kashmir’s destiny was sealed for ever. Two months after Jinnah was denied a holiday in Kashmir, the Himalayan state was to merge with India through the instrument of accession signed by Singh.

Many things could have happened in 1947. Kashmir’s Dogra ruler Hari Singh could have agreed to make his state part of Pakistan. He could have retained it as an independent country. But, destiny and Jinnah — who violated the standstill agreement between Singh, India and Pakistan — put Kashmir in India’s basket. 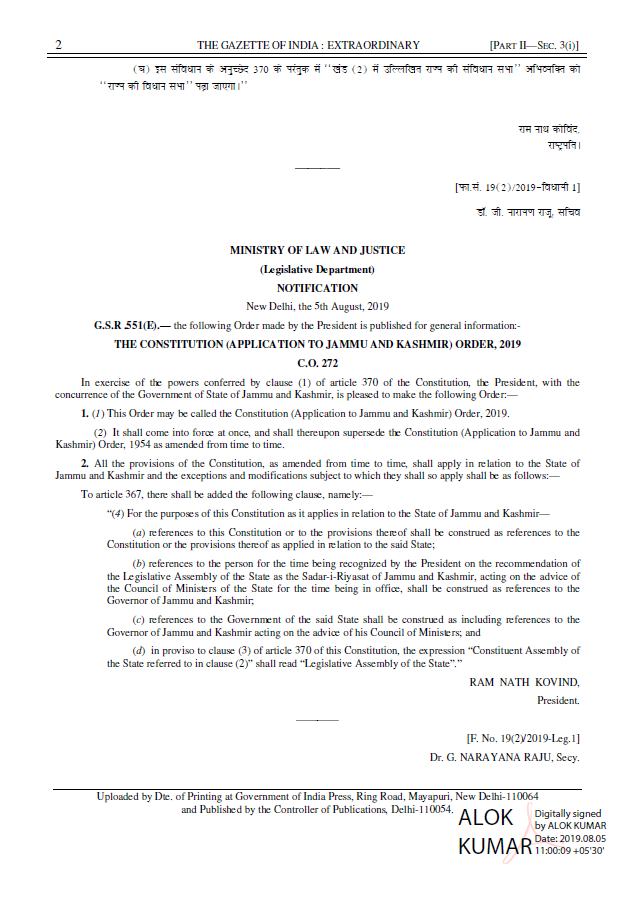 But, this accession was subject to one condition: it had to be approved by the people of Kashmir through a plebiscite. Till then, the accession was to remain temporary.

Since the plebiscite could never take place, India introduced Article 370 to give a legal framework to its ties with Kashmir. And, it had remained operational, albeit with some changes over the past few decades, till August 5.

Though the Kashmiris claim the accession was never approved by them, India has maintained that on November 17, 1957, the Constituent Assembly of the state gave its assent. Section 3 of the Constitution of the state says: “the state of Jammu and Kashmir is and shall be the integral part of the Union of India.”

There could, of course, be legal impediments to the government’s decision to scrap Article 370. This is because the Presidential powers to abolish this provision is subject to conditions. Article 370(3) clearly says, the President can’t issue a notification for removing the special status “without the recommendation of the Constituent Assembly of the state.”

And since the decision has not been approved by the Constituent Assembly, which doesn’t exist, it can be challenged in the court.

It is easy to understand why the Narendra Modi government is eager to take bold, decisive steps to ensure Kashmir’s assimilation into India by removing all political and constitutional impediments that come in the way.

Even though its accession defied the logic of Partition, India just can’t let Kashmir go, whatever be the cost or consequences. It can’t part with a territory over which Pakistan has fought several wars with India. The Simla agreement decisively settled Pakistan’s claims on Kashmir. No Indian government, however generous, liberal or secular, can ever think of changing the status quo.

Then there are strategic and geopolitical reasons. In an environment fraught with the threat of terrorism and Jihad — the motive that inspired the tribal invasion of 1947 — and aggressive neighbours like China, India can’t give up administrative or political control over the Valley. But, the biggest reason for India’s compulsion to retain Kashmir at all costs is this: the country just can’t afford another partition. Kashmir’s dream of azaadi (independence) can never be allowed to become a reality because it will set off a chain of violence and mayhem that would plunge the country in turmoil.

If Kashmiris are, for argument’s sake, allowed to have their own land on religious grounds, the Hindu backlash against Muslims in other parts of India would be severe. It would become impossible to counter the argument that since Muslims want to secede wherever they are in majority, why their status shouldn’t as Indian citizens be addressed once and for all.

Look at it any way you want, but the reality is, India can’t put a country of more than 1.3 billion at risk by letting Kashmiris decide their own fate. It may tantamount to reneging on promises made in the past, it may be deemed as a violation of the terms of Kashmir’s accession, but India has no choice but to move on in the interest of its current geo-political and internal compulsions.

It is obvious that the government believes seven decades of status-quo has not helped India normalise the situation in Kashmir. And, thus, it needs to be changed with some bold initiatives for a permanent solution.

Nobody knows if the proposed solution would have the desired effect. It is likely that it would lead to chaos and a constitutional crisis. It is equally likely that Kashmiris would ultimately accept it and move on without starting a new cycle of protests, strikes and violence.

But, the government has given a clear indication that it is no longer willing to hold on to the past or remain a prisoner of history. That it is willing to ensure Kashmir remains an integral part of India at any cost.