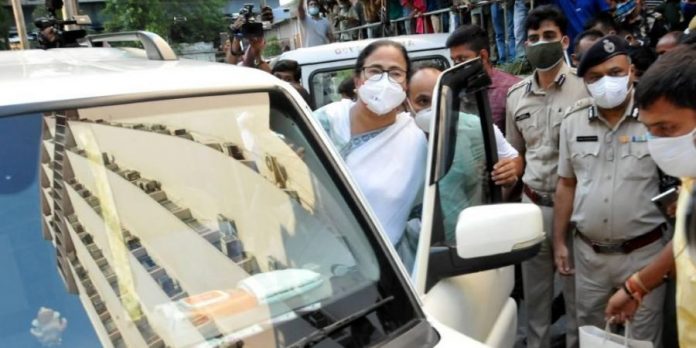 Chief Minister Mamata Banerjee leaves the CBI office in Kolkata where she had arrived following the arrest of TMC leaders on May 17. PTI Photo

The manner in which the CBI arrested three top TMC leaders and a series of suggestive tweets from Governor Jagdeep Dhankhar that followed after the state’s ruling party supporters erupted in protests against the arrests raised several political and legal questions.

Legal experts pointed out that the CBI violated due process of the law in carrying out the arrests for which there were no urgency.

“First, three sitting legislators, including two ministers, were arrested without taking the mandatory consent of the Speaker. Second, where is the need to arrest when the accused have been cooperating in the investigation process? Filing of a charge-sheet does not require arrest of an accused. Moreover, where is the urgency to arrest them when the investigations are over and charge-sheets are being filed,” pointed out Arindam Das, a senior advocate of the Calcutta High Court.

Just a day before the swearing-in ceremony of the ministers of the newly elected TMC government was to take place, the CBI quietly took the consent of the Governor to prosecute the four erstwhile West Bengal ministers in Narada sting operation case.

The Raj Bhavan said the Governor gave the prosecution sanction against the four invoking his powers under Article 163 and 164 of the Constitution as “at the relevant time of commission of crime was holding the position of ministers in the West Bengal government.”

The four in question are Panchayat Minister Subrata Mukherjee, Transport Ministers Firhad Hakim, TMC MLA from Kamarhati Madan Mitra and former Kolkata mayor and minister Sovan Chatterjee. Chatterjee though has joined the BJP, he has disassociated himself from the party activities after being denied the party ticket in the Assembly elections concluded last month.

Das told The Federal that the manner in which the Governor’s sanction was taken too was not appropriate.

“Why did not the CBI take the Speaker’s consent before the dissolution of the last assembly or waited until the formation of the current assembly,” asked Kolkata-based political commentator Nirmalya Banerjee, questioning the intent of the CBI.

The CBI’s action came under criticism from the TMC’s political rivals, the CPI (M) and the Congress as well. “Nobody in the state should be the victim of political vendetta. The CBI cannot be selective in its action,” said Congress state president Adhir Ranjan Chowdhury pointing fingers at the investigating agency’s inaction against the BJP leaders accused in the same case.

The CPI (M) in a statement questioned the timing of the move. It said the CBI action was an attempt to divert attention from the Central government’s failure to contain the COVID-19 pandemic.

In the unfolding of the development, the TMC however sees a bigger BJP game plan. Party spokesperson Sukhendu Sekhar Roy said a “larger conspiracy has been hatched by the BJP to take control of the state from the backdoor with the help of the Governor after it miserably failed to get the people’s mandate.”

The TMC’s conspiracy theory got some oxygen after the Governor in one of his series of tweets, tagging Chief Minister Mamata Banerjee, said, “Total lawlessness and anarchy. Police and administration in silence mode. Hope you realize repercussions of such lawlessness and failure of constitutional mechanism. Time to reflect and contain this explosive situation that is worsening minute by minute.”

The oblique threat of repercussions set the tongues wagging, not entirely without basis, about the BJP’s attempts to make a backdoor entry to the saddle of power in the state after its humiliating drubbing in the just concluded assembly elections.

“There is definitely a political motive behind this development. Why did the CBI wait so long to file the charge-sheet and what is the need to take the accused into custody after the charge-sheet has been prepared,” said civil rights activist Kirity Roy.

Roy said the development could be part of a political strategy to create unrest in the state to prepare a ground for the President’s Rule.

Teams of the CBI raided houses of Subrata Mukherjee, Firhad Hakim, TMC MLA from Kamarhati Madan Mitra and former Kolkata mayor and minister Sovan Chatterjee and took them to its Kolkata office at Nizam Palace Monday morning. All the four were made to sign arrest memos after being taken to the CBI office.

The sudden action and the alleged procedural lapses triggered angry protests by the TMC supporters demanding immediate release of their leaders in various places in the state including in front of the Raj Bhavan and Nizam Palace.

Defying the COVID-induced lockdown, clamped across the state for two weeks with effect from Sunday, the TMC supporters hit the streets. Even chief minister and TMC chief Mamata Banerjee camped at the CBI office for about six hours demanding that she too be arrested.

The demonstrators at one point threw stones at the paramilitary forces guarding the CBI office where the arrested TMC leaders were kept. The presence of demonstrators outside its office prevented the CBI from physically producing the arrested leaders before the court fearing deterioration of law and order.

The hearing was held virtually amid the protests. “The TMC should be extremely cautious not to fall into the trap. Any deterioration of law and order will definitely be exploited against it,” pointed out another legal expert Jayanta Narayan Chatterjee.