There is a worldwide negative perception against China. The coronavirus pandemic outbreak and its origin in Wuhan has further exacerbated these sentiments against that country. With US general elections due late this year President Donald Trump has been accusing China for delaying information about the COVID-19 causing more worldwide anxieties.

According to a survey conducted by Pew Research Centre two-thirds of the Americans who participated say that they have an unfavourable perception of China. This is the most negative rating for the country since the Pew Centre began asking the question in 2005, and up by nearly 20 per cent since the commencement of the Trump rule. Even positive views of China’s leader, President Xi Jinping, are at historically low levels.

There is already a momentum that is playing out against China among the Western countries. But on the other hand, the South-East Asian leadership is underplaying the whole issue against China given the influence of the Chinese economy on their markets. India continues to keep a neutral position with the policymakers trying to capitalize on anti-Chinese business sentiment to favour India’s sliding economy, which in economists view may not yield much improvement given the poor business ecosystem.

Of late, even in India, sentiments against China have been growing following the reports of failed coronavirus test kits and recent incursion of Chinese troops into Indian side of the Line of Actual Control (LAC) along the Indo-China border near Leh. 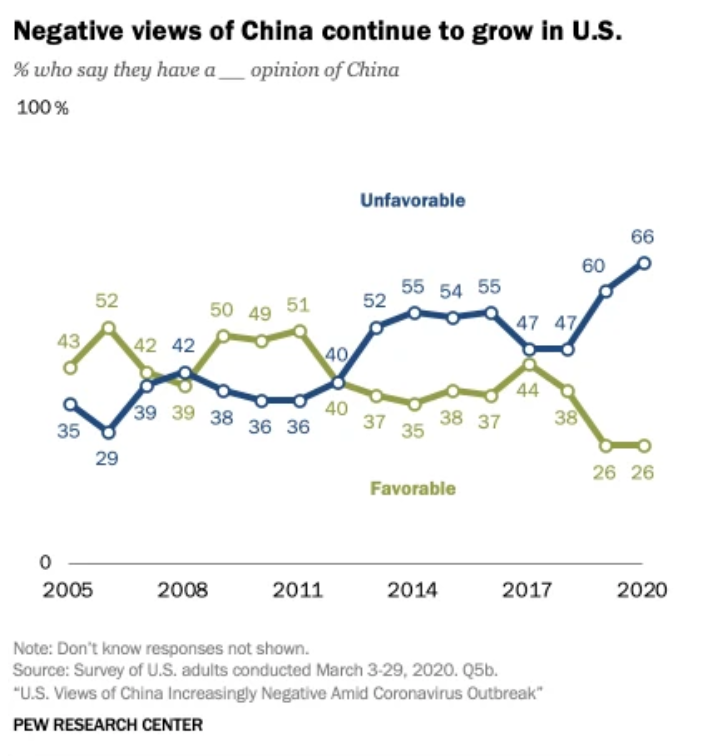 Americans also enormously believe that their nation leads the world militarily and that the world is better off with U.S. leadership any day as opposed to that of China. The data are based on a survey conducted with 1,000 adults in the U.S.

Related news: US, China spit fire, blow kisses in attempt to outsmart each other

The survey also observes that younger citizens, who have historically had a more positive attitude towards China as compared to older Americans, now drastically hold strong negative views of the country and are more prone to consider it as a threat to their nation than it has been so in previous years. The older Americans, however, strengthen their negative stance on most aspects of the U.S.-China relationship.

The change in perception is significant as according to a survey, of 38,426 people done in October 2019, China got mixed reviews and emotions from people around the world. A median of 40 per cent across the 34 countries surveyed have a favorable opinion of China, compared with a median of 41 per cent who have an unfavorable opinion. And as it is, while majorities in most countries agree China’s influence on the world stage has grown markedly, this has not necessarily translated into favorable views of the country. 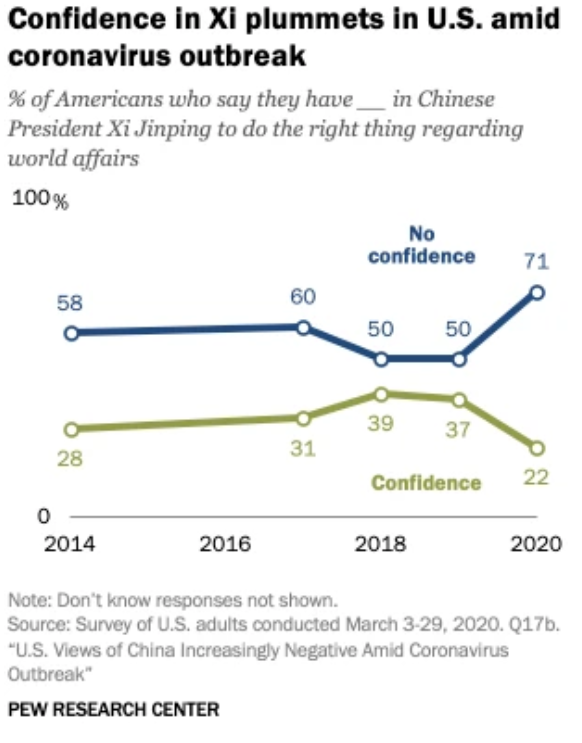 Opinion of China across most of Western Europe was already partially negative. While 51 per cent in Greece were having a positive view of the Dragon nation, pluralities or majorities in all other Western European countries had an unfavorable view, ranging from 53 per cent in Spain to 70 per cent in Sweden.

Negative views of China generally predominate in both the United States as well as Canada, where 60 per cent and 67 per cent respectively have an unfavorable opinion of the country. In both countries, this is the highest unfavorable opinion of China recorded in the Center’s polling history. It also receives adverse remarks from most of its neighbors in the Asia-Pacific region; despite underplay in South East Asia region study suggested in Japan, 85 per cent have a negative opinion towards China – the most negative among all countries surveyed. Now, with the epidemic outbreak, China receiving criticism from across nations is inevitable.

More than half in South Korea (63%), Australia (57%) and the Philippines (54%) share this idea. Opinion on China has dropped across the region over the course of Pew Research Center’s polling and is now hovering at around historic lows of all time in each of the countries surveyed. 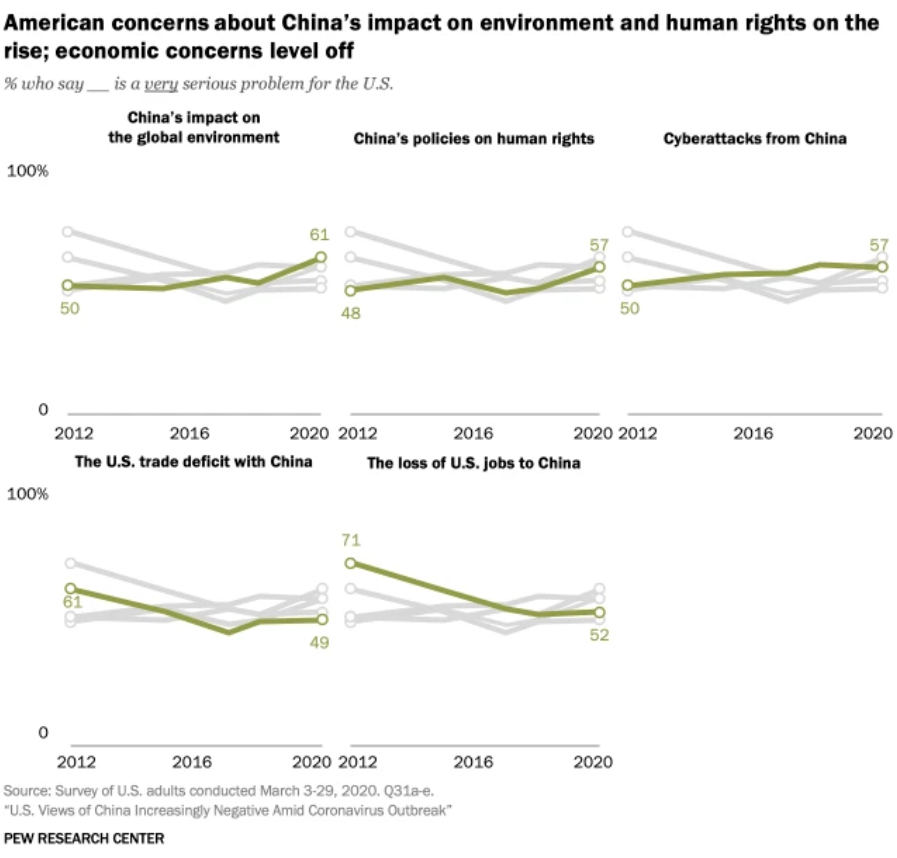 The problem with the novel coronavirus is that with the exception of China, which fought another coronavirus epidemic in 2003 — the Severe Acute Respiratory Syndrome (SARS) epidemic — there is little available for most nations on which to base their assessment of what lies ahead. What we already know is that China’s growth rate has further receded, even as it was confronting an economic slowdown that had already been in the works for a while. The outcomes of China abating to be the world’s biggest exporter of manufactured goods are considerable, and with no nation in a position to substitute for it, this development will hurt a further economic shrinkage internationally. Reviving China’s economy is not going to be easy and new normalcy is already well underway.

As COVID-19 brought the world’s second-largest economy to a standstill, China’s industrial output has shrunken at the fastest pace recorded in the first two months of this year and the urban unemployment situation has hit its all-time low. Some analysts are predicting that the coronavirus will have a harder impact on the Chinese economy than the whole global financial crisis.

If China was the worst-hit nation during the initial phases, the United States, Spain, Germany, and Italy have since eclipsed China. Most other nations today are confronted with a serious plight, and few remedies are in place as although the human costs are roaring.

Brushing aside the political and economic aftermath of COVID-19, there are other real and relatively more serious concerns arising from lockdown and its extension, social distancing, isolation and more. Healthcare experts and psychologists are speaking of an ‘epidemic of despair’ arising out of fear of unknown causes, thereby resulting in serious anxiety and cross-related mental health problems.

Extended isolation, according to psychologists, can trigger a different kind of pandemic evil leading the way to depression that envelops suicidal tendencies, fits of anger/rage, alcoholism and mass eccentric behavioural patterns.

Ordinary life is now far from normal, what we are now sinking into is the new normalcy. Masks and temperature checks are prerequisites to get into most places and most restaurants and other eateries are banning diners from facing each other in a mass “social distancing” campaign, which comes upon as a daunting task to the world’s most populated country.

People shun away handshakes, many restaurants have taken out half their seating in order to keep customers socializing minimal while other restrictions on large gatherings remain in place.

China is cautiously trying to spring back into business, although they are challenged with the fact that many millions of workers are wary of spending much or stepping out.

(Dr Rahul P is a visiting faculty at Loyola College, Chennai and a business behavioural consultant)

Muzaffar Ali: ‘Art in India needs a breath of...

You taught Bilkis Bano’s rapists will be free...

6:30 AM, 26 November, 2022 0
The Arunachal government’s decision is contrary to BJP’s stand on the Citizenship Amendment Act that promised to grant citizenship to minorities of Bangladesh, Pakistan and Afghanistan