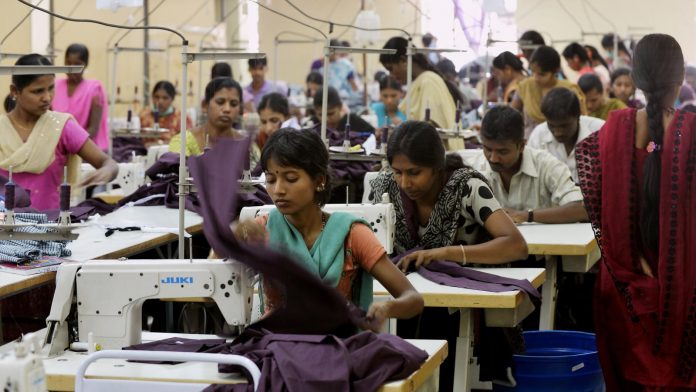 Malathi was caught unawares when she attained puberty in a hostel a month after she left home to be a resident worker at a mill. But she refused to return home. Years later she recollected the incident, “I attained puberty in the hostel arranged by the cotton mill owner. We shared rooms with seven other girls, and common bathrooms which had water. We also had yoga classes, a TV room where new movies would be aired, and most importantly, three meals a day. Even now I would live there if not for my child.”  Malathi belongs to a Dalit family in a village in Palladam and lives in a two-room house with 13 other family members.

Among the hundreds of garment hubs in Tiruppur, some small-scale units in villages and small towns have taken in adolescent girls who have dropped out of school after completing their 10th standard. If not factory jobs, girls join apprenticeship at the tailoring units close to their homes. They clock eight hours of work on the machines with about 50 minutes of total break time in a day.

Ramya, 17, who comes from a handloom weaver family, makes about  ₹8,000 in her tailoring job at a small-scale garment unit. Such units with 10-20 tailoring machines are ubiquitous in villages and small towns in the region. “I want to learn the Singer [machine] and the manager has had me work there a couple of times,” Ramya said. “I will make 80 paise per piece on the Singer machine instead of 35 paise on the overlocking machine.”  She has not taken to handloom weaving because it is too risky, and the rewards do not match the risk of making one saree.

The COVID-19 pandemic has exacerbated the trend of girls, particularly from poor Dalit families, entering the workplace at a younger age. 16-year-old Latha’s widowed mother Jaya was forced to send her young teenage daughter to the mills following the nation-wide lockdown in 2020. She said, “She went for two months, after that she stopped because she couldn’t get used to the heat there, and her legs were aching.”

Fifteen to 20 is the critical period for entry into the labour force for teenage girls in the Tirupur industrial cluster, which employs more than 3,00,000 individuals. Teenage girls are hired for entry level jobs at the cotton spinning mills, garments units and factories. Women hesitate to join these industries at a later age. Lakshmi is a 27-year-old woman who has moved to Palladam town after her marriage. She has not been able to find a suitable job there even though she worked in a cotton spinning mill for over six years after completing her 7th standard. She said: “I trained in mill work for over five years before marriage in 2015. Now if I go for tailoring job, which is the only popular occupation in the area I live in, I would be too old to learn the job from scratch.” At the cotton spinning mill, Lakshmi had even helped her employer recruit and train young girls. “They promised to give me a gold coin if I helped them recruit. I even trained my younger sister in mill work when she joined.” Lakshmi, however, did not get the promised gold coin.

Some women, however, persist despite barriers of age and lateral transmission of skills from one kind of work to another. Jaya, 32, from a Dalit household was widowed about six years ago. Her husband never wanted her to work outside the home when he was alive. Following his untimely demise, Jaya managed to raise her two children independently by working as agricultural labour, in a cotton spinning mill, in a power loom, and in a garment factory checking unit over the years.

Young girls’ participation in paid work must be understood in the context of poverty, caste and class-based inequality, and informality in the globalised industrial cluster of Tirupur in Tamil Nadu. Structural conditions in an industry that prefers young girls to older women, combined with the pressure to start work within marginalised groups, perpetuate school dropouts among young girls. As education scholars point out, the post-independence Indian State has only intensified educational differentiation and stratification, leaving young girls in the rural hinterlands of Tirupur between a rock and a hard place. This trend has worsened during the pandemic, in a context where school students in rural Tamil Nadu lack an easy transition to online education, and families struggle to make ends meet. Young women are forced to take up jobs during crises such as the pandemic, hampering their chances of exploring better working lives in the future.

Sarayu Srinivasan and R Bhavani are researchers at the French Institute of Pondicherry. Soundarya Iyer is faculty at RV University and associated researcher at IFP. The authors are grateful to Professor Nitya Rao for her comments. The authors acknowledge the Azim Premji University Research Funding Programme that funds this research.