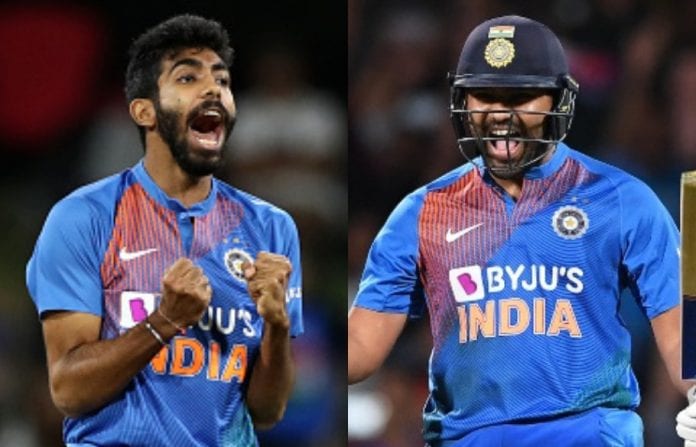 On a day when India registered a rare 5-0 whitewash against New Zealand to clinch their maiden T20 International series on the foreign soil of Mount Maunganui, the tourists broke several records.

While India’s vice-captain Rohit Sharma surpassed skipper Virat Kohli to become the only batsman with 25 scores of 50-plus runs in the shortest format, pacer Jasprit Bumrah became the first bowler in T20I cricket to bowl seven maiden overs.

India’s new wicketkeeper-batsman KL Rahul too broke the world record for the most runs in a bilateral T20I series with 224 during the recently concluded series.

Rohit Sharma now has the most 50+ scores in T20Is!

With the help of two sixes and three boundaries, the hitman scored his 21st half-century before getting retired hurt due to discomfort in his calf.

Rohit record also includes his four T20I centuries which places Kohli at the second spot in the list even though he has 24 half-centuries but no 100s in his kitty.

Rohit reached another milestone during the game when he came out to bat for the 100th time in T20Is, becoming only the second batsman to play 100 innings in the shortest format after Pakistan all-rounder Shoaib Malik, who takes the pole position with 105 innings.

However, in a blow to the squad, Rohit was ruled out of the upcoming ODIs as it has still not been ascertained whether he has had a calf muscle tear but he looked in severe pain even after physio Nitin Patel attended to him during the series-concluding game.

As for Bumrah, he broke the world record previously held by Sri Lanka’s Nuwan Kulasekara who has bowled six overs without conceding a single run in during his career which spanned 58 matches.

The Indian speedster wrote his names in the books of cricketing history with his impressive spell of three wickets for 12 runs from four overs at the Bay Oval during the fifth and final T20I on Sunday (February 2).

For his heroics with the ball, Bumrah was adjudged the player of the match when India successfully conceeded 164 runs set as the target.

This T20I series came as a blessing for India as they found an all-rounder in Rahul who was brilliant with the bat as well as behind the stumps.

Rahul walked back to the dressing room for 45 in the fifth T20I which helped him surpass the previous record of 223 runs, jointly held by Mozambique’s Damiao Couana and New Zealand opener Colin Munro.

New Zealand’s Ross Taylor also reached a major milestone as he became the first male Kiwi cricketer to play 100 T20Is and joined woman all-rounder Suzie Bates (112) as the only two New Zealanders to have played 100 matches in the shortest format.

In the process, Taylor also became only the third male cricketer to have played 100 T20Is for their countries.