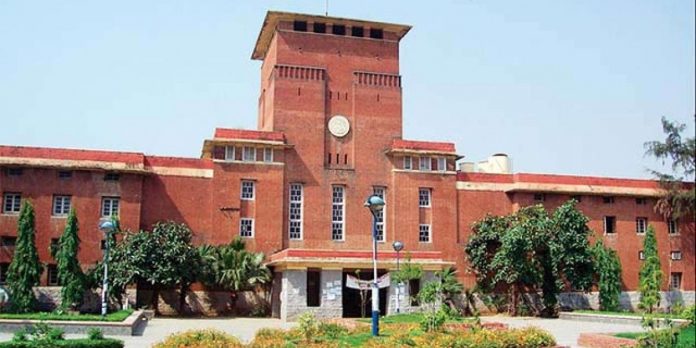 Prof Rakesh Kumar Pandey, a physics lecturer at the University of Delhi’s Kirori Mal College, who stirred a controversy with his ‘marks jihad’ comment against Kerala students, is unapologetic about what he said even as the Delhi University (DU) and teachers’ union he was part of, distanced themselves from his views.

Prof Pandey, affiliated to National Democratic Teachers’ Front, said in a Facebook post recently that a college (in Delhi) had to admit 26 students in a course having 20 seats, because they all (from Kerala Board) had 100 percent marks. He went a step further and said that for the last few years, the Kerala board was implementing ‘marks jihad’.

By ‘marks jihad’, Pandey meant to say that students with Leftist ideology were trying to occupy the ideological space in DU “by manipulating marks” and helping students secure a seat in DU.

Pandey’s comments come against the backdrop of DU colleges announcing a 100 per cent cut-off for their courses and reportedly students from Kerala State Board with 100% marks in Class 12 board examination were securing seats in leading colleges in Delhi.

When questioned about his claim, Pandey told The Federal in a telephonic conversation that he only raised apprehension about the recent trend where more and more Kerala students were applying for admissions in DU and that he did not target a specific community.

The professor failed to provide any data or trend to substantiate his claim of “manipulating marks” against the Kerala Education Board.

“I read a news report that said 4,824 applications from Kerala have been received this year and almost all are 100% marks. By securing 100% marks and getting an admission in DU they can dictate terms,” Pandey said.

“Since the popularity of Leftists seems to be waning in JawaharLal Nehru University, students are now applying at DU. We do not want these students to change the characteristics of the University and make it Leftist den,” he said.

Pandey said he stands by his statement and won’t delete the post.

Ironically, Kerala is not the only state where students were securing cent per cent marks in large numbers. For instance in Karnataka, about 20,958 class 12 students secured 100% marks in 2020.

Meanwhile, Left organisations like Students’ Federation of India (SFI) and the All India Students’ Association (AISA) and National Students’ Union of India protested against Pandey’s remarks on university campus on Friday (October).

Senior Congress and CPI leaders sought action against the professor. Congress MP Shashi Tharoor described Pandey’s remarks as ridiculous. “This anti-Kerala bias must end now,” he tweeted. Meanwhile, CPI (M) Rajya Sabha member John Brittas shot off a letter to Union Minister for Education Dharmendra Pradhan and urged him to take disciplinary and legal action against Pandey for his remarks.

Meanwhile, Delhi University, in a press release stated: “Being a Central University, the University of Delhi is equally and uniformly values the academic credentials of all the candidates irrespective of their States and School Boards. This year too, equal opportunity was maintained by accepting applications based on merit only. The University of Delhi strongly refutes and condemns the falsity of news which is being circulated regarding favouring candidates from a few boards.”

The National Democratic Teachers’ Front (NDTF), which is affiliated to RSS, too has distanced itself from Pandey’s comment. “NDTF has nothing to do with views expressed by any individual on any State Secondary Board. NDTF unambiguously dissociates itself from any objectionable statement,” it said.