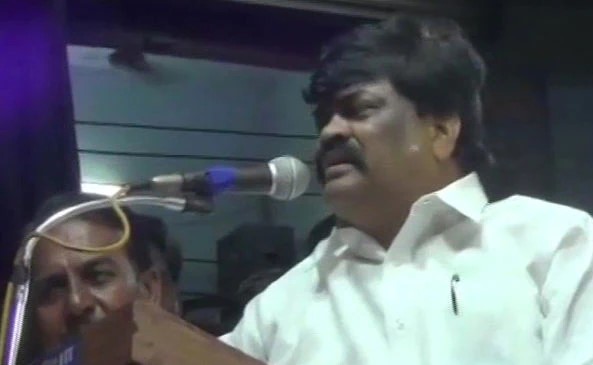 It appears that the arrest of former AIADMK minister KT Rajenthra Bhalaji has brought embarrassment to both the BJP and AIADMK.

Bhalaji was arrested on Wednesday – after a hot chase by the police in Karnataka – in connection with cheating cases. He has been remanded in judicial custody till January 20.

The conman had earlier gone into hiding following the Madras High Court’s dismissal of his anticipatory bail petition on December 17 in cases related to job racketeering. Before running to Bengaluru, it was reported that he was last seen in Tamil Nadu’s Virudhunagar district.

While the hunt for Bhalaji was on, AIADMK leaders maintained that he was preparing to go for an appeal in the Supreme Court and hence was not being seen in public. In the meantime, BJP’s Tamil Nadu chief K Annamalai stated that Bhalaji would prove himself innocent.

The one man who helped Bhalaji hide in Karnataka is reported to be Ramakrishnan, BJP’s Krishnagiri district secretary, though both parties admit that his help to the fugitive was on a purely “friendly basis”.

Nonetheless, the BJP and AIADMK have egg on their face after these revelations.

The BJP has already been facing criticism for allowing history-sheeters and criminals to come into its fold. On the other hand, the AIADMK has again been shown to be deeply dependent on its saffron ally.

Bhalaji earlier sang praises of Prime Minister Narendra Modi, saying that “Modi is our (AIADMK’s) daddy”, and was widely expected to join the BJP as he had several graft allegations against him.

‘Must not give friendship a political colour’

One of the spokespersons of the AIADMK, advocate Babu Murugavel, insisted that the help provided to the fugitive Bhalaji by the BJP man was a friendly gesture and “there was nothing wrong in it”.

“Is it prohibited that a person who has other party affiliations should not become a friend of mine? Similarly, by condemning the lack of security measures for the PM in Punjab, I would not become part of the BJP cadre. It is unnecessary to give political colour to this issue. Bhalaji and the BJP functionary could have been friends and the latter could have helped him as a friend. There is nothing wrong with it,” he said.

“Having said that, it should not be understood that the BJP itself helped the former minister,” Murugavel stressed.

He insisted that “we are not saying that Bhalaji has done anything wrong or what he did was wrong”.

“You have filed cases against him and our party will provide all legal aid to Bhalaji. He will use the same law and will try to come out with a clean chit. However, we also expect that the state government show the same kind of speed in probing cases mounting against their own ministers,” Murugavel argued, adding: “It is a pure case of political vendetta.”

Narayanan Tirupathy, one of the spokespersons of the BJP, said the party functionary who helped Bhalaji in fleeing could have acted on his own and the party high command had no role in it.

“The party as a whole has no relation with this development. He (Ramakrishnan) could have helped the former minister in his personal capacity. The party chief will decide whether any action should be taken against that particular functionary,” he said.

‘BJP has become the last resort of criminals’

Bhalaji held the milk and dairy development portfolio in the previous AIADMK government (2016-21). Last month, the Tamil Nadu crime branch registered two cases against him for cheating several persons by taking money on the promise of getting them jobs in state-run dairy cooperative Aavin and other government departments. At least 23 victims were identified and a total of Rs 1.4 crore was collected from them by Bhalaji and his gang. Three others who allegedly helped Bhalaji have also been arrested.

The arrest may create an embarrassment for the BJP and AIADMK for the time being but will not have much impact on the parties electorally or otherwise, said political commentator Aiyyanathan.

“The state BJP unit has done what its high command is doing in other parts of the country. Whether in Lakhimpur Kheri or Hathras, the BJP is trying to save the perpetrators of crime. Here too, time and again the party has become the last resort of criminals. This shows the BJP has no principles or values,” he said.

The AIADMK has won elections in places like Pollachi where sexual crimes took place. Their supporters will eventually forget these kinds of embarrassing situations, Aiyyanathan pointed out.