Powai Lake is an artificial lake located downstream from Vihar Lake, in between the northern suburbs of Andheri and Vikhroli.

In June this year, Maharashtra’s environment minister Aaditya Thackeray, along with a team of civic officials and environmental experts, visited Mumbai’s Powai Lake to give the green signal for work on a 10.2-km “eco-friendly cycling track”.

Thackeray, Yuva Sena president who also holds the portfolio of state tourism minister, took part in a recce of the area adjoining the lake from where the cycle track is supposed to pass through, and tweeted to his three million followers later the same day, informing them of his visit.

He said it was “on my humble request” that the Brihanmumbai Municipal Corporation (BMC) and Maharashtra Tourism Development Corporation (MTDC) were working on creating this cycling track “with the natural contours and all flora fauna being maintained as is”, and claimed that as work on the track progressed, it would “not just open up a natural urban space to citizens, but also help us interact with nature better”.

He concluded: “The Powai Lake is a gem of our city with its beautiful surroundings. Every aspect of this track will be eco-friendly.”

However, for the last three weeks, several of the city’s green voices have been coming together and staging a firm protest at the lake every Sunday morning. These include residents of Powai, along with environmentalists, social activists, students, and members of prominent environmental groups such as Save Aarey and Muse Foundations.

Armed with placards advocating for the protection of the Indian Marsh Crocodiles – a protected species under the Wildlife Protection Act – that inhabit this area, the protesters have been voicing their dissent against the construction of the track and have called for the “anti-environment project” to be scrapped, alleging that the ongoing construction work at the lake had commenced without any Environmental Impact Assessment (EIA) study having been done.

Powai Lake is an artificial lake located downstream from Vihar Lake on the Mithi river, in between the northern suburbs of Andheri and Vikhroli. The Britishers built it in 1891 by constructing two dams across the Mithi river in an effort to provide water supply to the city.

However, the project was gutted soon due to the bad quality of water, excessive growth of water hyacinth, as well as surrounding pollution. But its failure as a drinking water project managed to eventually morph it into a spot that is now thronged by thousands of tourists and Mumbaikars every year, who visit the lake to take in its quaint scenery and bask alongside flora and fauna in a city that is otherwise all about steel and stocks.

According to the Maharashtra tourism website, the National Lake Conservation Plan (NLCP) had, in 1995, included Powai Lake among the “ten main lakes” of the country to be revived and improved. This programme was launched in April 2002 and implanted by the BMC. “As a result of this move, the condition of the lake has considerably improved,” reads the website. 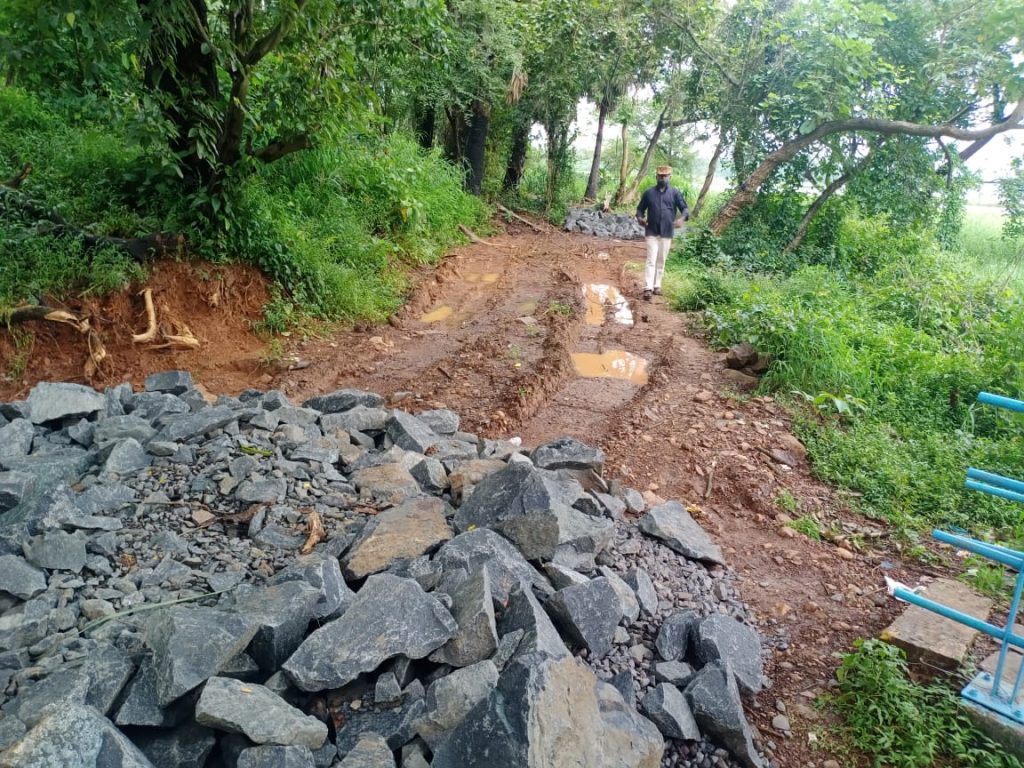 A bulk of the protesters gathering at Powai Lake on Sunday mornings comprises of members of Save Aarey, which was instrumental in protesting against the metro car shed being built on Aarey Forest land and consequently getting it revoked.

Speaking with The Federal, one of its members, Tabriz Ali Sayed, a resident of Powai’s Murarji Nagar, said both issues – the Aarey car shed and the Powai Lake cycling track -stem from the same core ideology: to protect Mumbai’s natural green cover against the farce of development.

“During the Aarey protest last year, we were fighting against a car shed being constructed on forest land,” he said. “Here in Powai, we are fighting against the construction of a cycling track. Over there, it was the leopard that was in danger. Here, it is the crocodile. Around 2,700 trees were supposed to be cut down to make way for the Aarey car shed. In Powai, around 200 trees have already been marked to be axed down to pave way for the cycling track.”

When asked why dissenting voices were uniting now against a project that was initiated four months ago, he said: “We didn’t know anything about it. We only came to know when we started seeing that construction work had commenced around the lake. We have filed an RTI plea to try and find out what exactly this construction is for, but we haven’t yet received a reply. Several emails have been sent to Aaditya Thackeray, requesting him to provide clarity on this project, as well as to Additional Municipal Commissioner (Projects) P. Velarasu, but we have got no reply from there either. We didn’t even get a straight answer when we asked the local contractor who was present at the lake as to whether he had any legal documents showing proof of BMC permission.”

He added: “Ours is a single demand, much like it was in the Aarey case: there should be no construction in and around Powai lake.”

When protests against the cycling track around the lake had just started brewing towards the end of last month, the BMC, in a cryptic press note issued on October 8, announced that “an expert committee has been constituted to get the help and guidance of experts and practitioners in the natural development of Powai Lake area.” 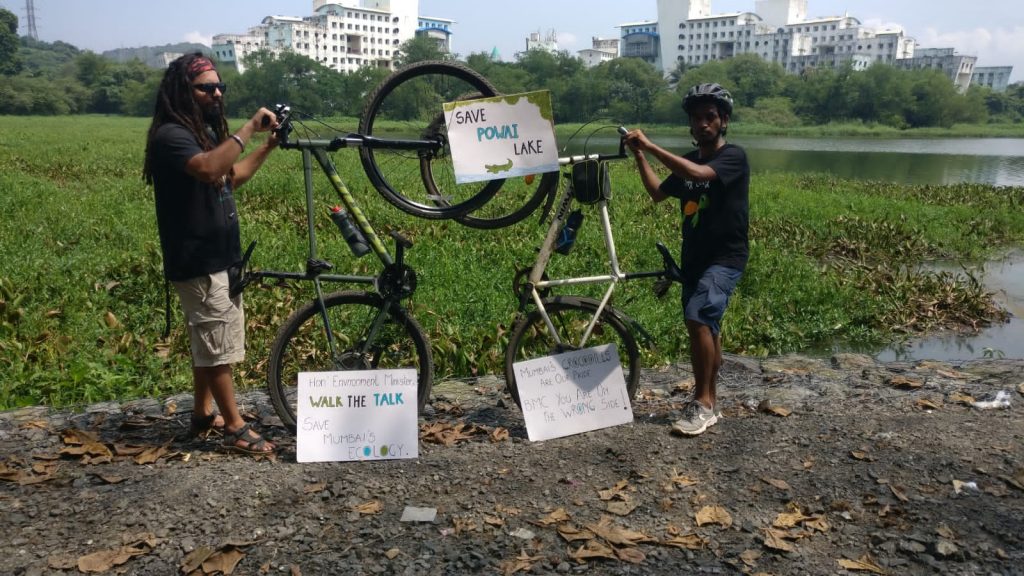 The committee’s job, according to the press note, is to primarily guide the BMC “to take into account the present condition of Powai Lake, suggest solutions to solve problems, as well as enhance the natural richness of the lake area through natural development.”

The note added: “Various measures are being taken by the corporation to prevent the problem of pollution and keep the water of the lake pure, and to maintain the natural condition of the lake and its biodiversity.”

The BMC press note was full of hard sells, ranging from the beneficial and nature-friendly use of gabion technology “to conserve and revitalise the Powai Lake area”, to make efforts aimed at preventing the flow of sewage into the lake, as well as conserving the lake’s natural biodiversity.

Stating that the Powai Lake area has been built on all sides of the lake as the surrounding residential area has increased over time, the civic body said the space between the lake and the adjoining park would be developed in such a way “that the original natural structure of the lake will not be affected.”

“If the entire perimeter of the lake is developed, the natural protection of the lake will be possible, along with cleaning the lake, improving the water quality in it, preventing the edge of the lake from erosion, and preventing any encroachment, all these things will be achieved through this development,” said the BMC. “Not only this, but the community area will also be provided with a good, clean, and completely natural experience for citizens coming to the lake area.”

The press note seemed to absolve the corporation of any legal violations, in the present, and in the future. “Powai Lake has been identified as a natural site in the Mumbai Development Plan 2034,” said the BMC. “As per the rules of the development plan and the competent authorities… they have approved the repair, reconstruction, and expansion work of the lake and its surroundings. Considering the construction of this lake and other criteria, the projects related to it do not require the approval of the State Environmental Impact Assessment Authority. Considering the need to develop this lake which has been in existence for almost 125 years as a natural heritage area, a proposal has been submitted to the Mumbai Antiquities Preservation Committee and it has also been approved.” 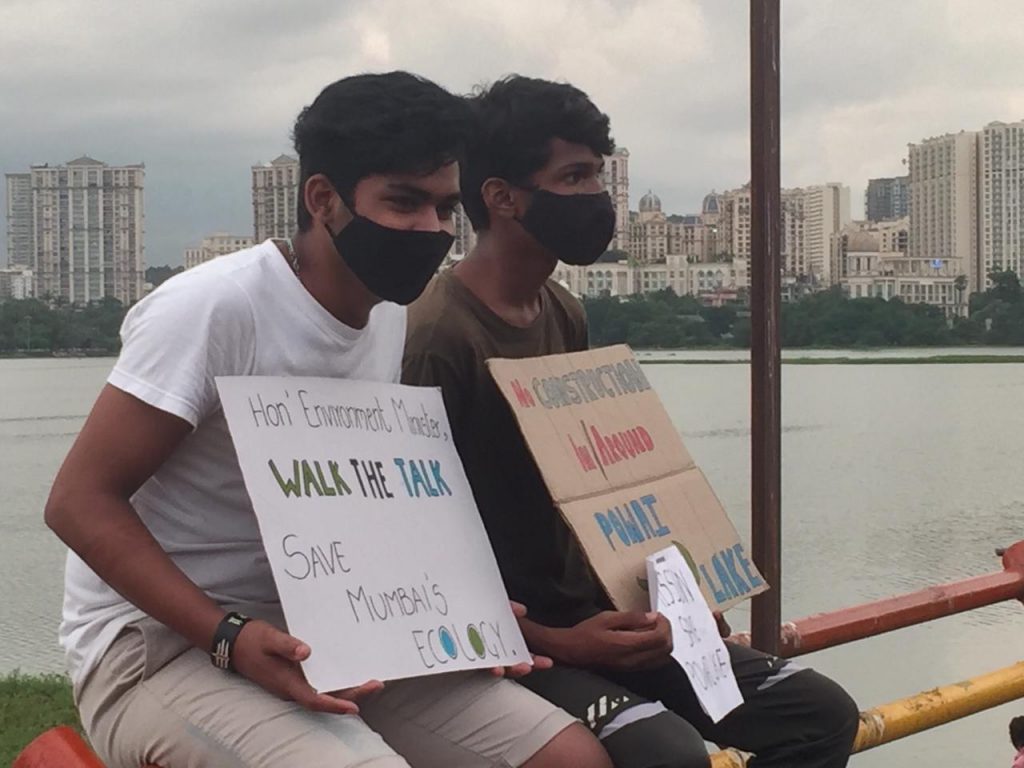 It further stated: “Powai Lake is not part of the Sanjay Gandhi National Sanctuary. The lake area is under the jurisdiction of the Corporation. Nor is it reserved for any private or public forest area. Also, the area of the lake does not fall under the definition of wetland area. Therefore, there is no question of violation of any of the relevant rules while developing the Powai Lake area.”

Tabrez said the BMC’s October 8 press note doesn’t put to ease any of their concerns. “They (BMC) are saying they have made an expert committee to guide them, but a committee is formulated before a project commences – not when 70-80 per cent of construction work is already complete. No Environmental Impact Assessment has been undertaken, nor any consequential hearing in which we could raise our objections.”

“This is the problem that arises when you have an environment minister who is also the tourism minister,” said Amrita Bhattacharjee, another member of Save Aarey who has been taking part in the Sunday protests at Powai lake. “The road that is meant for the cycling track is passing through the deer park, which has a forest type of topography, and around the periphery of the lake they have put these gabion structures which are almost seven metres wide. Eventually, the road will prevent crocodiles from moving about freely and crossing the lake while moving towards Vihar Lake, which is also their natural habitat.”

With civic elections slated for February, what was once an ambitious project aimed at combining tourism and environment, now seems to be murky with allegations of keeping the public in the dark.

The Aam Aadmi Party (AAP) staged a massive protest against the cycling track earlier this week, calling Thackeray’s behaviour “childish for turning the city into his personal playground.”

However, only time will tell whether the Shiv Sena will be able to meander its way out of this sticky environmental situation – much like it did in the Aarey car shed matter.