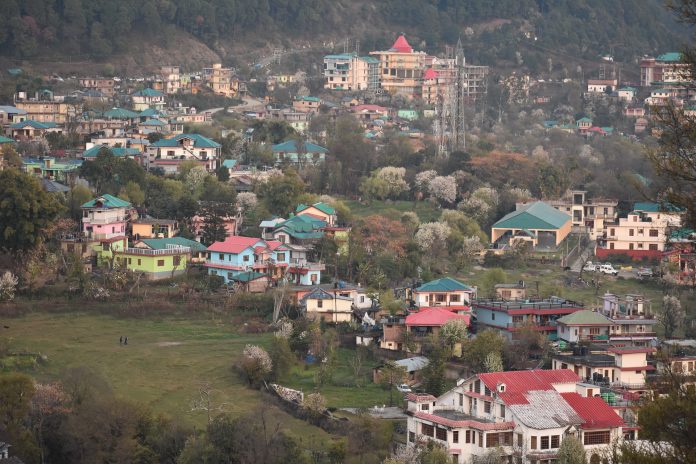 Dharamshala is a fast-growing municipal area. Between 2011 and 2015, new wards were added to the municipal corporation and its population saw an increase of over 70 percent.

Cloudburst and resultant flash floods in Dharamshala, a popular tourist destination in Himachal Pradesh, on Monday (July 12) should wake up the state authorities and local municipal administration to the haphazard development happening in this once-serene and scenic city.

Dharamshala is bursting with activities with hordes of tourists flocking the beautiful place every year, which in turn is aiding a construction boom, though at the cost of rich forests that surround the place.

“This is just the tip of the iceberg. The nexus between builders and government officials runs deep,” said Ghazala Abdullah, an environment activist based in McLeodganj, near Dharamshala in the northern state of Himachal Pradesh, when asked about the hotel and restaurant structure erected on forest land in McLeodganj in violation of the Forest Conservation Act, 1980. In January this year, the Supreme Court upheld the 2016 order of the National Green Tribunal (NGT), India’s green court, which had directed that the illegal construction be demolished.

In this case, two tracts of forestland, flanking the main road as one enters McLeodganj from Dharamshala, were originally diverted for a parking lot and a bus stand, both ‘public purpose’ projects, in 1997 and 2001, respectively. The construction began in 2005. However, in 2006, the state government signed a lease deed with the Himachal Pradesh Bus Stand Management and Development Authority (HPBSMDA), which in turn awarded the construction work to Prashasti Surya Construction Company. Subsequently, the scope of the project too widened to include the construction of a hotel-cum-restaurant. The state government did not seek a change in land use and user agency from the central environment ministry. The NGT, in 2016, held the HPSBMDA and the state government responsible, ordered them to pay compensation and demolition of any structure in addition to the bus stand and the parking lot.

The District and Session Judge, Kangra at Dharamshala, who was asked to hold an inquiry by the Supreme Court, too noted in his report in October 2018 that both the town and country planning and the forest department only issued show-cause notices and filed police complaints but did not take any effective steps to stop the construction. The construction continued in violation of forest, building and pollution laws between 2005 and early 2009, the report inferred.

Dharamshala is a fast-growing municipal area. Between 2011 and 2015, new wards were added to the municipal corporation and its population saw an increase of over 70 percent. The selection of Dharamshala for the Indian government’s Smart City project and its designation as the winter capital of Himachal Pradesh added to the pace of growth. The core area of Mcleodganj, which is the headquarters of the Tibetan government-in-exile and an important Buddhist pilgrimage destination, is a heritage zone, with building restrictions.

But almost all the structures spread along its main Jogiwara road and back narrow alleys are over-built. Multi-storey buildings hang over main roads, and on steep slopes, at precarious-looking angles in the region. Besides, the grand properties of Hyatt and Park Fortune hotels stand out for the sheer expanse they cover. Rapid urbanisation, migration, population growth and tourism have led to haphazard development that has often spread into the forests. Tree felling, although prohibited, is facilitated through other means.

“Digging out soil beneath the trees or exposing the tree roots to heavy monsoon rains or deliberately drying them to aid in their death is a common occurrence here,” said Abdullah. As recently as a month ago, there have been reports of levelling of hill slopes in the region.

In May 2015, Abdullah wrote to the Chief Justice of Himachal Pradesh highlighting the indiscriminate felling of trees in Dharamshala. The High Court of Himachal Pradesh took up the matter suo moto and noted the “callous and indifferent” approach of the local officials and the failure of the official machinery to check illegal tree felling and forest violations. The court-appointed Deven Khanna, an advocate based in Shimla as the special commissioner to ascertain the status of environmental violations in the region.

Khanna submitted his report in August 2018 identifying over 120 constructions in violation of forest and building bye-laws in Dharamshala. He observed that about 500-1000 trees on McLeodganj-Dharamkot road and Mountaineering Institute road were dying due to the removal of soil from underneath. “After the state government gave assurance that it would act on the violations, the court disposed of the case,” said Khanna. But most of the structures built in excess were regularised on payment of fee, while some were demolished.

Around the same time as the Dharamshala case, a petition was initiated in the Himachal Pradesh High Court against forest encroachments in the state, in which the court ordered disconnection of electricity and water supply to illegal structures and uprooting of all crops raised on government forest land. However, the forest department allegedly went after small encroachers, some small shops, houses and several apple farms in Shimla district.

However, responding to the protests and pressure from the opposition, the state government proposed a policy in April 2017 for the regularisation of small forest encroachments of up to five bighas (0.4 hectares) provided that the total land holding of the ‘offender’ did not exceed 10 bighas (0.8 hectares). The draft was not finalised but evictions continued.

Since May 2011, the Himachal Pradesh government has a special task force for registering cases and issuance of challans against persons who have encroached upon more than 10 bighas (0.8 hectares) of forest land. Yet the rate of eviction of bigger encroachments has been slow. The Comptroller Auditor General of India too noted this delay in its routine audit in 2016 and associated it with poor inter-departmental coordination. “Delay in obtaining eviction was due to lack of coordination between revenue and forest departments for demarcation/spot verification of encroached land,” it said.

Overlap of jurisdiction between forest and revenue department, especially in the case of forests that are not demarcated, makes matters worse. Of the total forest area in the state, 42 percent is not demarcated, according to the Forest Department. This is the area that has either not been surveyed or its boundary not identified.

“We often discover new forest land during our field inspections. Forest and revenue land exist here in small broken patches in close proximity to each other, much like a honeycomb,” explained Sanjeev Sharma, Divisional Forest Officer (DFO), Dharamshala.

As for the forest department’s role in cases of tree felling on private lands, the DFO said that the issue comes under the jurisdiction of Municipal Corporation, Dharamshala. “We, however, help the corporation in the verification of the violation,” added Sharma.

Pradeep Thakur, the commissioner of Dharamshala Municipal Corporation, responded that the issue of tree felling was resolved according to the law. Eventually, after the closure of the case by the High Court, many of the structures built on forestland were regularised on payment of fee, some were demolished.

The civil society experts state that the Mcleodganj bus stand case demonstrates vividly how public welfare is misused to favour commercial interests. The bus stand, as noted by the district judge, has a poor construction design with limited space for entry, exit and turning of buses. In its current state, the activists state that it is a testimony to the collusion and selective action of the state and how the overlap between jurisdictions is being used to condone certain violations.

“Usually when you visit, they hear you, but nothing happens afterward. Some officer may jump into action sometimes due to the backing of the High Court. But they only punish the small fry. No action is taken against big players despite photo evidence and other proof,” laments Abdullah.

‘For Dharamsala’s sake, people need to take a U-turn to ...

Forest pays the price for Dharamshala’s growth as tourist spot