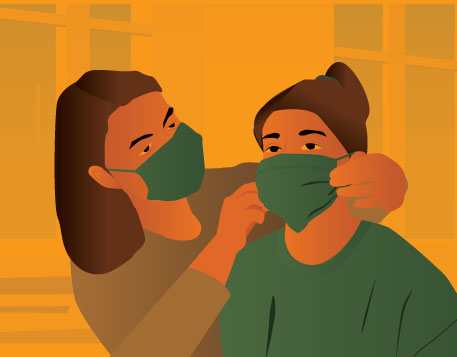 The state health department has no data on mentally challenged -- either wandering or homebound.

The June 28 order by the Madras High Court on inoculating the mentally ill has raised questions about the challenges involved in the vaccination drive.

While hearing a petition filed by CHEER, a Chennai-based NGO, the court said that just like the special drive undertaken by the state to protect persons with disabilities, a similar measure should be adopted for persons who are mentally ill, who may be homebound, or may not be aware of the need to protect themselves.

“The policy of having mobile teams travel to persons with disabilities rather than make such disadvantaged persons come to the centres may be adopted in case of mentally ill patients,” said the court.

It not only ordered to inoculate the homebound mentally ill, but also the wandering mentally ill persons.

“There are many persons who are abandoned by their families and roam around in the streets. They should be taken care of at the local level. Municipalities, corporations and panchayats should pay attention that such persons are provided some shelter and are vaccinated on a priority,” the court said. All this should be done in five weeks time and a status report by the health department should be submitted, read the court order.

The Federal spoke to some mental health professionals and activists to know about the challenges involved in carrying forward the vaccination drive.

‘No data on mentally ill

S Namburajan, secretary, Tamil Nadu Association for the Rights of All Types of Differently Abled and Caregivers (TARATDAC), said at a time when the state health department has no data on mentally challenged — either wandering or homebound — it is difficult to carry out the vaccination drive.

“First of all, we must know as to where they are going to be vaccinated. How are they going to be identified? Would they be tested for Covid? Where would they be kept, if they tested positive? These are some of the questions that need to be answered,” he said.

It is be noted that because of the public interest litigation filed by TARATDAC, all inmates of Institute of Mental Health (IMH), the only government hospital in the state to treat the mentally ill, were tested for Covid in July last year.

When it comes to vaccinating the homebound mentally ill, there are different kinds of challenges, says Namburajan.

“The first requirement for vaccination is the identification proof. In most districts of the state, the department for differently-abled has not provided certificates for the mentally challenged. That’s why it is apprehended that many homebound mentally ill persons would miss the vaccination drive,” he said.

Dr Kishore, director of Banyan, an NGO, said the vaccination of the mentally ill is just one part of the whole treatment process. “The first concern to be addressed is: where will the rescued mentally ill people be accommodated? They must be given two doses within three months. So till then what are they going to do? There should be a meaningful engagement. They must be given food and work. It needs cooperation from various departments such as the police, urban development and others,” he said.

Also read: People with disabilities in India left behind amid COVID-19 crisis

For the homebound mentally ill, unless the state government does a house-to-house survey, it is not possible to identify them and bring them under the vaccination drive. The nominated representative of the mentally ill should also have to be educated on vaccination, said Kishore.

A government mental health doctor from Pudukkottai district says that like other patients, the Covid vaccination is also underway for the mentally ill.

“At IMH, vaccination has already been done. Similarly, in other parts of the state, through district mental health departments, vaccination is being carried out on the patients who are under institutional care. But such a drive has not been publicized much. So, there is a general perception that the mentally ill are being left out of the vaccination drive,” he said.

There is, however, a problem in the case of the homebound mentally ill, he said.

“The case of inoculating the differently abled is different. If a person has a physical disability, no one is going to look after the person. But there is also a stigma over mentally ill people. Just because you identified the homebound mentally ill, you simply cannot go and vaccinate them. This is a rights-based problem. So it should be dealt with some sensitivity,” he said.

Another government doctor from Chengalpattu district, on the condition of anonymity, said in the first wave of the pandemic no one cared about the wandering ill patients.

“Now the court has ordered to inoculate them. Though it looks good on the face of it, a proper testing could be done before they are given vaccination. Doctors must assess what kind of mental ailments they have, whether they have any physical ailments as well. The doctors should know if they have the decision-making capacity,” he said.

State Health Secretary J Radhakrishnan said that after consulting the Commission for Differently Abled, they will take action.

“We can’t say we won’t follow the court orders. But it’d take time. After getting data and other details from the commission for differently-abled, we will assist them in whatever way possible,” he said.