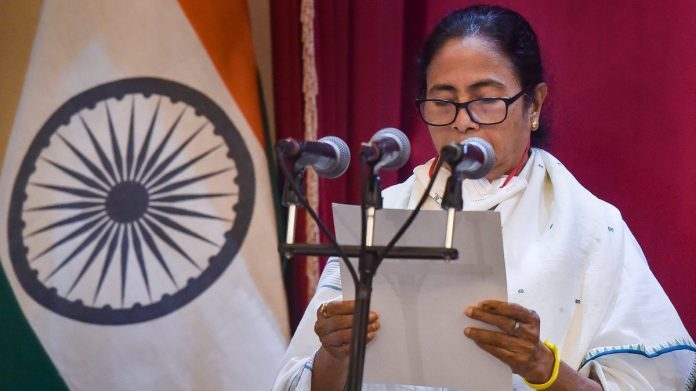 After her oath-taking ceremony, West Bengal Chief Minister, Mamata Banerjee said that her first priority was to control COVID-19 in the state. (PTI pic)

On being sworn in as Chief Minister of West Bengal, in a low-key ceremony amid the pandemic, for the third consecutive term on Wednesday (May 5), Mamata Banerjee appealed to all political parties to abstain from violence and ensure peace prevails in the state. She also said that violence will be controlled with a firm hand.

The CM’s plea for peace at her swearing-in comes after 14 people have been killed after results to a fiercely-contested, no-holds barred election to the Bengal assembly was declared on May 2.

After her oath taking ceremony, Banerjee admitted that there has been some “sporadic violence” after the election. “We have to control that with a strong hand,” she added. However, Banerjee did not miss the opportunity to take a dig at the Election Commission, stating that in the last two months the administration system had been run by the EC.

“There was some inefficiency”, she said. But, she promised to change the set-up at once. Her first priority however, she said was to control COVID-19 in the state and she was going straight to the state administration headquarters to hold a meeting with her officers to work out measures to tackle the pandemic.

The Governor, Jagdeep Dhankar, too waited for the swearing-in ceremony to be over before he drew her attention to the ongoing violence in the state. He urged Banerjee to act immediately and send relief to the victims’ families. “I have every hope that the Chief Minister on an urgent basis will take all the steps to restore the rule of law,” Dhankhar said, reported The Indian Express. He made this appeal even as Banerjee was standing by his side.

The Governor also said that law holds the highest position in our Constitution and that has to be maintained.

The Left Front and the BJP boycotted the ceremony. Congress leader Pradip Bhattacharya, senior TMC leaders like Partha Chatterjee and Subrata Mukherjee, poll strategist Prashant Kishore, and Banerjee’s nephew Abhishek Banerjee attended Banerjee’s oath-taking event. Banerjee, who lost from the Nandigram constituency from where she has stood in this election, has to now win an assembly seat before six months to be able to continue in office.

Every democracy is a work in progress: Blinken during India visit