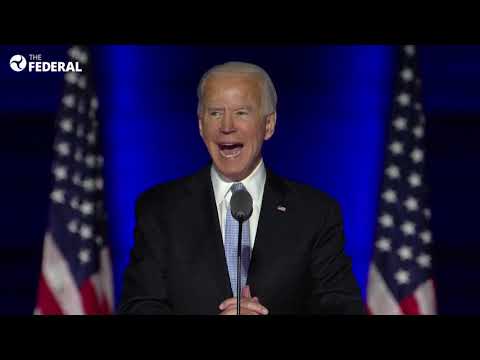 In his victory speech in his hometown, Wilmington, Delaware on Saturday, US President-elect Joe Biden reached out to Donald Trump voters, saying he would act as their president as much as he would for those who voted for him.

“I understand your disappointment tonight. I’ve lost a couple times myself. But now, let’s give each other a chance,” Biden said. “It’s time to put away the harsh rhetoric. To lower the temperature. To see each other again. To listen to each other again.”

Watch | Kamala Harris: ‘While I may be first woman in office, I won’t be last’

“I sought this office to restore the soul of America, to rebuild the backbone of this nation, the middle class and to make America respected around the world again, and to unite us here at home,” the President-elect said.

The 2020 US election, in which Democrat Biden has secured 273 electoral college votes and snatched the Presidency from the incumbent Donald Trump, has been billed as one of the most divisive in recent American history.