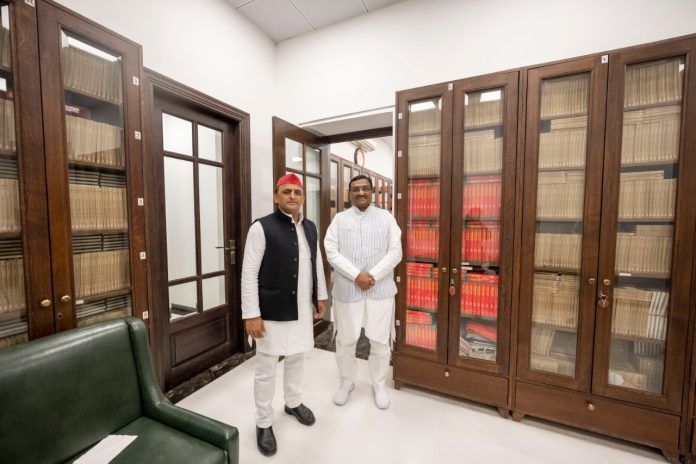 Dharam Singh Saini is a backward caste leader and a four-time MLA from Nakud in Saharanpur, and is set to strengthen the SP’s votebank among a section of the largely neglected OBCs.

Interestingly, Saini had earlier refuted all possibilities of quitting the BJP and even slammed his former colleague Swami Prasad Maurya who had quit the Yogi government and joined the SP.

“My name was wrongly given in Swami Prasad Maurya’s list that is floating around. I had no idea. I am and will be in the BJP. I am not leaving the party,” Saini had said then.

Around 2.40 pm on Thursday (January 13), Akhilesh Yadav tweeted a photo announcing and welcoming Saini into the SP.

An NDTV report said quoting sources that Yogi Adityanath had tried persuade Saini to not leave BJP. Saini had given up his government residence and security.

Saini, who was initially with Mayawati’s Bahujan Samaj Party (BSP), had quit the party and joined the BJP in 2016 along with Swami Prasad Maurya and several other leaders.

Akhilesh Yadav has been targeting these backward caste leaders, who form a strong votebank and had helped the BJP win the 2017 assembly elections. With this, the SP leader is widening his voter base, adding to the earlier Yadav-Muslim stronghold his party had enjoyed under his father, Mulayam Singh Yadav.

“Not a single day passes when a BJP leader does not leave the party. Take UP, for example, 13 MLAs are leaving BJP to join another party. I have come to know that four BJP MLAs are leaving it today itself,” Nationalist Congress Party (NCP) chief Sharad Pawar has observed about the defections.