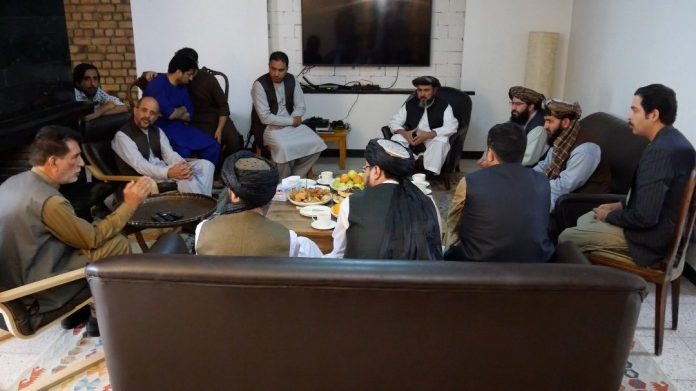 When the Taliban paid a “surprise visit” to the private Tolo news channel office, the first thing they did was confiscate the weapons of guards posted at the gate. Then they sat down and “very respectfully” talked about their openness to the idea of a free press in Afghanistan, particularly local news organisations.

Mohseni is the chairman and CEO of the MOBY Group, the media company that owns Tolo News. He said it would be naive to expect no restrictions; “… the question is how much (will the media be restricted)…”

Also read: Taliban had it easy so far, now comes the real challenge

“Slightly surprised we are still allowed to function… although they always assured us, they are open to the idea of a free press in Afghanistan and particularly local news organisations,” he said.

“So, this is interesting now… but we can’t take it for granted. There is a long way to go before we know, for sure, how they will treat the media and news organisations.”

Last week, the Taliban held a press conference and said that private media organisations could function and women could continue to work and study.

Images of a Taliban official being interviewed on Tolo News by a woman journalist seemed to confirm the promises were real. Since then, though, there have been indications to the contrary.

Last week Shabnam Dawran, a well-known Afghan woman journalist who used to work for Tolo News, said she was barred from working at her TV station.

Reuters quoted Sahar Nasari, a presenter on state-owned Radio Television Afghanistan, as saying the Taliban took his camera and beat up a colleague while they were trying to film a story.

German public broadcaster Deutsche Welle said last week that one of the relatives of their journalist was shot dead, and a second badly injured, by Taliban fighters hunting for him.

Mohseni suggested it was perhaps too early to be sure if these incidents are an exception to the ‘new’ Taliban.

“I think we have to wait for the real Taliban to stand up… let’s see who is going to be more dominant. There are different factions… some moderate and pragmatic and others very hardcore. Some understand they have to engage, others may have an ‘isolationist’ Afghanistan in mind,” he said.

He also pointed out changed cultural circumstances on both sides of the divide – young Afghans, whether Taliban or not, who grew up in a world dominated by social media and WhatsApp.

Mohseni said that while his channel had not really altered its news programming, it had initially “toned down” entertainment content, some of which has since been re-launched.

The Taliban had warned media outfits that content will have to remain “in accordance with Sharia law” and not adversely affect “national security.”

“Of course… if the question is it has to be in accordance with Sharia law… who is interpreting it? What is in ‘national interest’? We had similar issues with previous governments (under Presidents Ghani and Karzai)… it is very easy to define ‘national interest’ as something that suits a narrative,” he said.