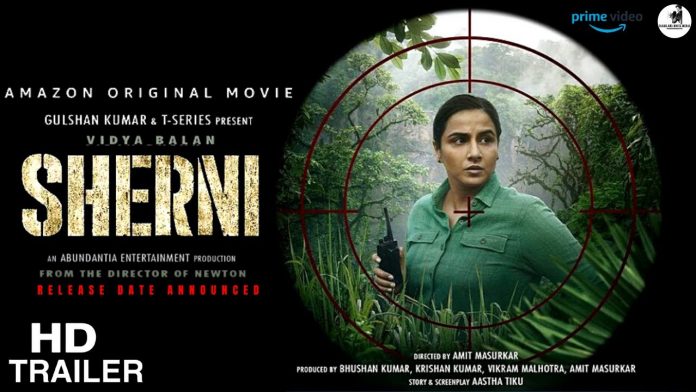 `Sherni’ has more than uncanny resemblance to the killing of Avni tigress in Yavatmal district of Maharashtra three years ago.

She appears on the screen only twice and her cubs only once, but throughout the riveting two-hour-long drama you would keep on rooting for the tigress. Her presence is felt in every shot. Vidya Balan essaying perhaps the most understated performance of her career, as a forest officer out to save a beleaguered tiger family, is the other highlight of `Sherni’.

A well-crafted film with authentic location shots and cinematography to match, `Sherni’ brings the man-animal conflict in India to the fore like no other Hindi film has. It’s directed by Amit Masurkar, the man who gave us critically acclaimed `Newton’, starring Rajkummar Rao and Pankaj Thripathi. His astute handling of the tricky subject lifts the film by several notches, a far cry from the pathetic `Roar’ (shot in Sunderban with Siberian tigers) and Ajay Devgun’s `Kaal’ (parts of which were actually filmed in Corbett National Park).

`Sherni’ has more than uncanny resemblance to the killing of Avni tigress in Yavatmal district of Maharashtra three years ago. Avni was brought down by a trophy hunter when the forest department failed to tranquilise this alleged man-killer. Her death created a nation-wide furore, which is yet to subside fully. In both the real and the film versions, the tigress was shot dead by a hunter with connections in the right places.

But `Sherni’ is not your standard man-versus-wild fare. Masurkar, as expected, has steered clear of creating mushy emotions. A less able director would have gladly converted the subject into a typical ‘masala’ film. Instead, it goes much deeper and spreads its net much wider. The docu-drama feel to ‘Sherni’ that Masurkar has created is a joy to watch- though it may not appeal much to the pandemic-affected crowds now hooked to the maniacally paced web series.

Vidya Balan’s hypnotic performance is bolstered by the supporting cast of Vijay Raj, Brijendra Kala and Neeraj Kabi. Ila Arun and Mukul Chadda are wasted here. But it’s Sharat Saxena, portraying the trophy hunter with blood of six tigers and two dozen leopards on his hands, who matches Vidya Balan’s grit with his pig-headed belligerence. His is the face of pure evil, who would not mind sending bullets after the dead tigress’ cubs.

But there is another group of actors who holds the film together. Many of them you will not even find in a Google or IMDB search. They form the members of jungle teams who go about tracking the tigress and throwing a protective ring around her. Much like police-procedural, their activities can be aptly termed `jungle-procedural’. From identifying the tigress’ route through her pug marks and the scratching she made on tree trunks to alerting the villages where she was heading towards, these teams are shown doing the kind of work which the unsung forest patrolling teams do all the time in the various tiger reserves and sanctuaries of India. They are the real heroes of our forests.

It’s for the first time that toiling forest guards who work from sunrise to sunset and often well into darkness have been portrayed faithfully on screen. Full marks to Masurkar here.

A killer on the prowl?

‘Sherni’ is a simple story of a tigress with two cubs who wondered out of her home in a protected forest. Out in a place where there are simply not enough prey animals to keep her and her cubs alive, she ends up killing three humans one by one. But she is now moving back to the forest she emerged out of, in fact has reached quite near, only the obstacles now placed before her have become almost insurmountable.

Also read: Maharashtra’s wrestlers grapple with COVID and its aftermath

And these are all man-made obstacles: local politicians exploiting villagers for electoral gains, human encroachments in animal corridors and the age-old unresolved question as to who owns the forests- the humans or the animals.

One hopes more such meaningful films on conservation would come out of our film industry. Tiger, that poster boy of India’s wildlife, remains the biggest pulling power for the tourists, photographers and film-goers, and for a reason. Decades before Amit Masurkar reached the Balaghat forest area of Madhya Pradesh with his crew to shoot for ‘Sherni’, realizing fully well the phenomenal crowd-pulling capacity of a tiger, Jim Corbett had famously commented in the Man-Eaters of Kumaon, “A tiger is a large-hearted gentleman with boundless courage and that when he is exterminated—as exterminated he will be unless public opinion rallies to his support—India will be the poorer by having lost the finest of her fauna.”

Even the villainous trophy hunter of ‘Sherni’ is not immune to the mesmerizing charm of his victim. Seconds after shooting down the tigress, he approaches the body and mutters to himself, “what a beauty.”

The film released on Amazon Prime on June 17.