Cyrus Mistry suffered head injury and was brought dead to the hospital, a doctor who attended to the former Tata Sons chairman after he was rushed to a government hospital in Palghar’s Kasa on Sunday, has said.

On Monday, Anahita Pandole, 55, and her husband Darius Pandole, 60 who were injured in the accident, were shifted by road to Mumbai from a hospital in neighbouring Vapi town of Gujarat. 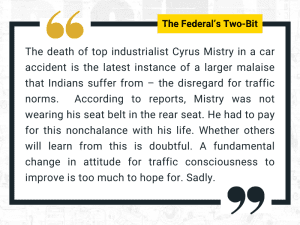 An official from Kasa police station in Palghar said they have registered a case of fatal accident under provisions of the Motor Vehicles Act.

Mistry, 54, was among four people travelling from Ahmedabad to Mumbai when their car hit a divider. While Mistry and Jahangir Dinsha Pandol, who shared the backseat, died in the accident, the wife- husband duo – Anahita Pandole and Darius Pandole – in the front seat sustained severe injuries.

Also read: Cyrus Mistry will be remembered for fighting the Tatas tooth and nail

The accident took place at around 2.30 pm, when the car, a Mercedes, was on the bridge on the Surya river. Police have dubbed an error of judgement on the part of Anahita, a renowned gynaecologist who was driving the luxury car, behind the accident.

“At first, two patients were brought which included Cyrus Mistry and Jahangir Dinsha Pandol. Both of them were brought dead. The locals who brought them told us that Cyrus Mistry had died on the spot. Jahangir Dinsha Pandol was alive on the spot, however, he died during the transit. We declared him dead at around 5 pm,” Dr Shubham Singh, who attended to the patients told ANI.

He said, after 10 minutes another ambulance brought in Anahita, and her husband Darius Pandole, in a serious condition. The duo were given first aid and shifted to a higher centre and later to Rainbow hospital from where they were airlifted to Mumbai, the doctor said.

He said while the postmortem would have been conducted in the government hospital itself, the district collector ordered that the bodies have to be shifted to JJ Hospital in Mumbai’s Byculla for “expert opinion”.

“Cyrus Mistry had a head injury and Jahangir Dinsha had a left leg fracture and head injury. Their postmortem was to happen here, but we received a call from the district collector and SP that they have to be shifted to JJ Hospital for expert opinion,” the doctor said.

While police based on prima facie investigation suspect the accident to be a case of overspeeding after which the driver lost control of the vehicle, Mistry and Jahangir, who shared the rear seat, reportedly did not have their safety seat belt on – mandatory for passengers under the Motor Vehicle Act.

Prima facie, the luxury car was speeding when the accident took place on Sunday afternoon, a police official told reporters. The Mercedes car covered a distance of 20 km in just nine minutes after crossing the Charoti check post in Maharashtra’s Palghar district, 120 km away from Mumbai, the official said on Sunday night.

“As per preliminary investigation, over-speeding and the error of judgement caused the car accident. Both the deceased were not wearing seat belts,” the official said. “While analysing the footage captured by CCTV cameras at the Charoti check post, Palghar police found the car had crossed the check post at 2.21 pm and the accident took place 20 km ahead (in the direction of Mumbai),” he said. This shows the car covered a distance of 20 km (from the check post) in just nine minutes, the official said, adding that the accident took place at 2.30 pm on the Surya river bridge.

An eye witness also said that the car lost control when it was trying to overtake another vehicle from the left side.

Also read: Mistry’s death: ‘A gynaecologist was at the wheel; tried to overtake from wrong side’

The bodies of Mistry and Jahangir Pandole were sent to the state-run J J Hospital in Mumbai for postmortem, the official said. Jahangir Pandole was the brother of Darius Pandole, a former independent director of the Tata Group of companies. Maharashtra Deputy Chief Minister Devendra Fadnavis, who holds the home portfolio, has asked police to conduct a detailed investigation into the accident.

“I am deeply saddened by the sudden and untimely demise of Mr Cyrus Mistry. He had a passion for life and it is really tragic that he passed away at such a young age,” Chandrasekaran said in a statement offering “deepest condolences and prayers” to Mistry’s family.