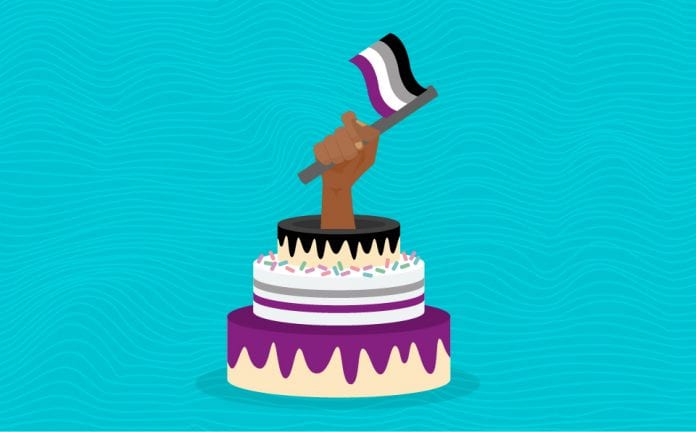 “I’ve never been sexually attracted to or aroused by anyone. When I was in school, I thought it was normal, that I’m still young. But when my feelings didn’t change in college, I thought there was something wrong with me,” says 24-year-old Shravya (name changed). In our hypersexualised world, it is unsurprising that Shravya felt out of place when she heard her friends and peer group talk about their sexual adventures.

Sexuality is a spectrum and there is a wide range of labels people can identify with, but we are conditioned into believing its black and white. On one end of the spectrum is asexuality, a minority community among minorities, severely sidelined by heteronormativity — a worldview where heterosexuality is the ‘normal’ sexual orientation.

According to research by psychology professor Anthony Bogaert​, about 1 per cent of the population is asexual. That might seem like a small number but that’s also because it’s difficult to quantify this definitively.

This brings us to the question, what is asexuality? “It is when a person doesn’t experience sexual attraction. An asexual person can have a sexual drive, be sexually aroused, have sex, be in relationships, but they aren’t sexually attracted to anyone,” explains Pragati Singh, who has spent the past few years researching about asexuality. The biggest misconceptions about asexual or ‘ace’ people are that they hate sex or don’t want to have sex, she adds. However, people with low libido, who are sex averse or don’t feel like having sex also identify as asexuals, though they aren’t technically asexual, says Pragati.

Most often, aces find that sexuals try to find ways to explain their sexual orientation or suggest cures for it. Kathyrn (name changed), who identifies as grey sexual (a person who identifies anywhere between sexual and asexual), has now become immune to people trying to find explanations to her sexual orientation. “In my case, I am occasionally sexually attracted to people but when I’m with them, I feel nothing. The moment it turns from fantasy to reality, something switches off in me. I have never felt aroused when I’ve been with someone, even though I’ve been in relationships, in love, had sex… There’s a label for how I feel, that I don’t use because it confuses people further: autochorissexual,” says the 26-year-old.

She adds, “People have told me it’s a phase, that I haven’t met the ‘right’ person, tried the right positions… My gynecologist told me there’s nothing called grey sexuality/asexuality and it’s probably an infection. Even my friends don’t fully understand what is it like to want someone and not want them at the same time. What people don’t realise is that when I’m talking about my sexual orientation, I’m not looking for cures, suggestions or sympathy. I have already spent my college days thinking there’s something wrong with me, I don’t want to live that way anymore. I’m as ‘normal’ as anyone else.”

It’s easy and convenient for sexuals to want to try and find explanations for asexuality and alternative identities that make them uncomfortable. That way they won’t have to question the status quo. When people ask Pragati what ‘causes’ asexuality, she gives them a cheeky answer to shut them up. “Whenever someone asks me that, I ask them in return — what causes heterosexuality. If I’m feeling cheeky, I first ask them what their sexual orientation is and depending on that, I ask them the question,” says Pragati, who identifies as hetero-demisexual. “Demisexual is a kind of grey sexual who experiences sexual attraction based on certain conditions,” she adds. So, only if there is a strong emotional, intellectual, romantic or some other kind of attraction, does the person feel sexual attraction. Otherwise, demisexuals may be closer to the asexuality side of the spectrum, she says.

Shravya isn’t sure if she is asexual but she relates to the term more than any other. She came across the word a couple of years ago and she’s been reading up about it since. Yet, she finds it difficult to get rid of the social conditioning that tells her this isn’t the norm. A large part of her still thinks there is something ‘wrong’ with her. “Even my mother, who I’m really close to, dismisses it as something that will happen over time. But what if I’m never sexually attracted to someone?” she worries out aloud.

Aces can be in steady romantic and sexual relationships, if they choose. Jade (name changed) has been dating her partner for the past two and a half years. The 24-year-old began questioning her sexual orientation a couple of months ago. “It’s something I’ve been thinking about… I find people attractive but never sexually. I admire and acknowledge their beauty, that’s about it.”

Being in a relationship becomes a bit complicated for people with alternative sexualities. Aside from the challenges that come with relationships, aces and grey aces have to think about ways to educate their possible partners. Kathyrn says, “Explaining to men, in particular, that I don’t like or want penetrative sex or anything other than kissing is difficult. A lot of them think with the head between their legs and assume that just because I’m kissing them, it’s consent for everything else. Most of them just don’t understand that I’m not aroused or interested, even though I make it a point to tell them about my sexual orientation beforehand. I’ve been with very few people who’ve tried to understand.”

Jade echoes similar sentiments. She says it’s difficult being in a relationship with someone who doesn’t understand asexuality. “I’ve been making an effort to send links about asexuality to my partner to make him understand that it’s not something he lacks but it’s how I feel.”

The world most often assumes that everyone wants to have sex, so the ideas of being sex-positive and sex-negative are never discussed. Even the way we define sex is driven by a heteronormative view, where penetration is everything. While Jade is sex-negative, she has penetrative sex for her partner’s sake. “I’m not interested in having penetrative sex but I compromise and do it for my partner. I know my limits, so does he. At times, it’s difficult but we manage.”

This is one of Shravya’s biggest fears — how will she find a partner when even heterosexual people struggle to find companions. She says, “I’ve had two boyfriends, I liked them, but I never felt anything sexual for them. Or for anyone for that matter. When I lived in Mumbai, a colleague asked me out. I said yes and at some point he held my hand. Instead of finding it romantic or sexual, I burst out laughing. He couldn’t believe that I felt nothing.”

Asexuality Visibility and Education Network (AVEN) is a worldwide support group that Poornima discovered in 2015. But she realised that India needed a separate group that could understand its culture, so she started Asexuality India with a friend in 2016. The group soon grew and though Poornima no longer identifies with the label of asexual, she is glad she started it.

“Now I identify as queer. It’s not that my sexuality has changed, it’s just how I present it that has. The language I use is different. I think asexuality was a tool for me to figure out my sexuality rather than my identity,” Poornima explains. There is also a Facebook group called Indian Aces, started in 2014, by Pragati.

While a lot of these terms may seem new and unnecessary to many, words are more than a bunch of letters strung together. They have the power to influence and change the way we think and perceive things. And at times, knowing that there is an identity out there for you helps.

“Before I came to know about the word asexuality, I used to identity as bisexual and then, pansexual. But both of them didn’t fit quite right and continued feeling like there was something wrong with me. When I found out about asexuality, even though I wasn’t entirely asexual, it felt like such a relief,” says Kathyrn. “Then I found out about grey sexual, which fits me even better. It helps me get some clarity on who I am.”

When violation cannot be justified as artistic manipulation

Rapist is you: Women protesters vs a macho Hindu rashtra

Why ‘progressive’ south India is unable to shun the Deva...