A feature of the Lok Sabha poll results was that regions that were traditional outliers for the BJP voted for the party. The party was able to sweep the north-east, for instance. But there were holdouts, and one among them was the tribal-dominated two seats of Jharkhand.

Elsewhere in Jharkhand, however, anecdotal evidence shows that many tribals did vote for the BJP. The BJP government that came to power in 2014 in the state has wooed tribals with various projects. “In the past four and a half years, we have done a lot for tribals. We have introduced a domicile policy, due to which 90 per cent of the jobs have gone to natives (tribals and non-tribals),” Praful Shahdev, BJP spokesperson for Jharkhand, told The Federal. Assembly elections are scheduled for November this year and the Sangh Parivar has already started its ground work in Jharkhand. 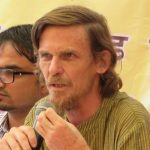 A key part of the campaign is to counter the influence of the church. “For a long time, they have been trying to Hindu-ise and Sankritize tribals,” Jean Dreze, an academician, economist and tribal rights activist told The Federal. In a recent incident, Prakash Lakra, a 50-year-old Adivasi of Jurmu village in Dumri block was lynched to death by cow vigilantes from the neighbouring Jairagi village, setting off a stream of protests and creating resentment.