Ambareesh Mallick’s eyes are red with rage and pain as he recalls how his parents fled religious persecution in Bangladesh and entered India. Yet today, he wants to inflict the same pain on those he believes don’t fit into his dream ‘Hindu rashtra (nation)’.

Even as protests over the Citizenship Amendment Act rage across India, the Rashtriya Swayamsevak Sangh (RSS) has found a fertile ground for its ‘Hindu rashtra project’ in people like Mallick and others living in government rehabilitation camps in Karnataka’s Sindhanur village.

About 400 km from the state capital Bengaluru, there are five government rehabilitation camps in Sindhanur where Hindus from erstwhile East Pakistan (now Bangladesh) and repatriated communities of Indian origin from Burma (now Myanmar) have been living for more than four decades.

While the repatriated Burmese of Indian origin are settled in one of the camps (RH-1), the Hindus from Bangladesh — who fled religious persecution — live in rehabilitation camps, RH-2, 3, 4 and 5.

With many of them having faced atrocities in the Muslim majoritarian country, the RSS knows their cases are ripe for exploitation. Stepping up the pedal to garner support from these settlers, the right-wing organisation has asked the people to share their tales of “anguish” with more and more people — how they were ill-treated in Bangladesh and therefore, support the move for a Hindu nation.

While some of the Hindu families living here claim to have lost their citizenship (acquired over the years) documents despite legally entering the country, many who entered illegally have no documents to prove their purpose of stay. But all of them claim to have fled their homeland following religious tension during the Bangladesh Liberation War of 1971. 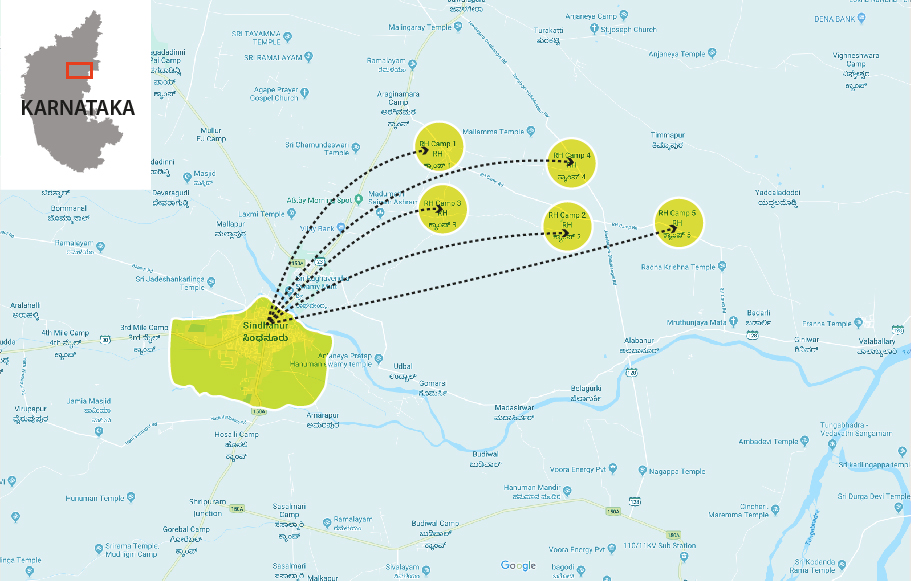 These people now feel the Citizenship (Amendment) Act will give them a new lease of life, recognising them as citizens of India. The contentious law provides that Hindus, Sikhs, Buddhists, Jains, Parsis and Christians from Afghanistan, Bangladesh and Pakistan who entered India before December 31, 2014, will be eligible for Indian citizenship.

The RSS have been running a shakha (branch) in one of the camps since 1999 and opened another recently. Mallick is an active member of one such shakha. Those observing the activities in these shakhas feel the RSS is channelising the pain and frustration of the Hindu settlers to foment hatred against Muslims in the country.

As part of its centenary celebrations in 2025, the right-wing body is preparing the ground for new shakhas in each and every mandal across the country. The settlers — who believe in the RSS ideology and religiously participate in shakha activities — are an integral part of its ‘spread the hate message’.

Much on the lines of its Kashmir narrative — if injustice was meted out to the Pandits in the 1990s, people should not have a problem with government doing the same to Muslim population in the Valley now — the RSS has been pushing for a similar campaign here. The narrative in Karnataka (and elsewhere in India) is — if Hindu communities were weeded out of their homeland in Bangladesh, there’s nothing wrong in doing the same to Indian Muslims in India.

And it seems the right-wing group have achieved considerable success in pushing this narrative deep within these camps.

Pranab Bala, the RSS district head and a Bangladeshi settler, says a large section of the residents (over 90 per cent) living in the camps subscribe to the RSS ideology. While in RH-2 there are over 100 active RSS members, in other colonies about 20-25 of them participate in shaka activities regularly. The population in these four colonies is estimated to be around 13,000-15,000.

These people can’t be grateful enough to the RSS for ending their citizenship woes.

“Ever since 2008 when BJP came to power in Karnataka, RSS leaders kept assuring us that they will come up with a solution to end our citizenship problems. Bringing in a law was just a matter of time,” Mallick tells The Federal.

“We can say that it is because of RSS and our association with them over the years led to the passage of the bill. We are happy that our efforts finally paid off,” he adds.

Many living in the camps have another reason to feel that the road to citizenship will be smooth from now on. They claim even though some of them came here as illegal immigrants, the Indian government subsequently “gave” them ration card, Aadhaar or voter ID cards and other such documents. And hence “it should be easier for them to prove their identity”.

But ask them how will such immigrants apply for Indian citizenship under the amended law if they are ‘already citizens’ (since they claim to have voter ID/Aadhaar/ration card), and they have no conclusive answers.

Take for instance, the case of Arun Dali (60), who fled Bangladesh in 1971 and entered India without any legal documents. He does not have a valid citizenship certificate, but he does have Aadhaar and voter card. Same is the case with Praita Mondal, whose husband is not a legal immigrant and does not posses valid documents.

During the implementation of the National Register of Citizens (NRC) in Assam, cases like theirs were rejected. However, they feel a similar situation would not arise in Karnataka as Home Minister Amit Shah repeatedly gave assurances that “no Hindus will be sent back for want of documents”.

While the rules are yet to be framed as to which documents one will have to submit to apply for citizenship under the amended law, the right-wing group and its affiliates have been assuring these people that as long as they are Hindus — even if they are illegal immigrants and do not have the necessary documentation to prove they were persecuted for religious reasons — they would be given citizenship.

Although the CAA came into effect earlier this month, BJP leaders and RSS members have been talking about the so-called benefits of the bill since the saffron party came to power at the Centre in 2014. And they increased their engagement with the community when the Citizenship Amendment Bill was first introduced in the Lok Sabha in 2016.

Back in the 1970s, the Karnataka government had recognised about 932 families (727 Bangladeshi families and 205 repatriates) and later given them five acres of agricultural land and a housing plot to each as part of rehabilitation schemes. Post that, many persecuted Hindus from Bangladesh living in places like Madhya Pradesh, Odisha and West Bengal moved to these settlements hoping to live in peace, without having any documents to prove their identity.

While many in the RH camps acknowledge that they entered the country illegally, community leaders have raised concerns in the past over their citizenship and land rights and have even boycott elections on a few occasions. However, since their demand fell on deaf ears, they started to believe in someone who promised them citizenship. The RSS and the BJP now plans to run a massive awareness campaign in the coming days to brief them about the amended law.

While there are miles between a law and the ordinary man’s understanding of the legalities involved, these settlers are hopeful of finding a closure with the CAA.

For instance, Bala, who is 38 years old and was born to legal Bangladeshi settlers, married the daughter of an illegal immigrant. Now, the citizenship of his wife and kids is under question. He feels his family is neither here nor there.

Despite confusions and subsequent promises by the BJP, he feels it is in his interest to support the party and the CAA.

But while the BJP claims that the CAA will not affect any citizen of India of any religion, it undermines the commitment to equality before the law enshrined in India’s Constitution that prohibits any kind of discrimination on religious grounds.

In Assam, the NRC declared 19 lakh people as illegal immigrants, out of which two-thirds are rumoured to be Hindus. Now with the plan to implement NRC nationwide, the government wishes to naturalise these people (all except Muslims) using CAA, irrespective of whether one has valid papers or not, if they have lived in India for five years.

Bala, who claims to have adopted the Hindutva ideology even before he joined the RSS, says his thoughts were shaped by the horrific stories of persecution in Bangladesh that he had heard from his elders.

“We always believed in Hindutva as we were pushed towards it. And after joining the RSS in the late 90s, my belief towards the Hindu nation only increased,” he says. Bala started the shakha in the rehabilitation camp with an aim to convey how Muslims used to mistreat Hindus in Bangladesh.

The 38-year-old says he attends RSS camps where they largely talk of the organisation’s founder KB Hegdewar and MS Golwakar, the second and the longest-serving chief of the RSS, who propounded his theory of India as a Hindu nation.

But not everybody agrees with the RSS and are miffed with it for “taking credit”. They say the people have been fighting for their citizenship rights even before the RSS or the BJP tried to help.

Prasen Raptan (43), national general secretary of Nikhil Bharat Bengali Udbastu Samanvay Samiti, whose organisation has been fighting for citizenship rights for Bangladeshi Hindu immigrants since 2005, says they are thankful that the current government for solving their problem.

But, he adds, it was the same BJP that created panic among Hindu immigrants with Citizenship Amendment Act, 2003 (during Atal Bihari Vajpayee government), according to which a person shall be a citizen of India by birth if both parents have Indian citizenship, or one of whose parents is a citizen of India and the other is not an illegal migrant at the time of his birth. (To put things in perspective, the Citizenship Act has been amended five times before — three times under Congress-led governments and twice under the BJP governments).

He denies that most villagers in all the four blocks subscribe to the RSS’s idea of Hindu nation.

Raptan is married to the daughter of an illegal immigrant. So, for his kids, the condition that both parents should have Indian citizenship could not be met. He and his organisation have been fighting for it since then. They even held a protest in Delhi in 2011.

“Many villagers, including some RSS members from the village, approached leaders like Bende and BL Santosh this year to air our views. That doesn’t mean it’s because of them the issue is resolved,” Raptan says.

Despite the difference of opinion among the various Hindu immigrants in Sindhanur, everyone seems to agree on one thing — “where would persecuted Hindus go if not India”.

To bolster their claim, RSS leaders take refuge in Bangladeshi economist and researcher Dr Abul Barkat’s 2016 book, Political economy of reforming agriculture-land-water bodies in Bangladesh. According to Barkat, between 1964 and 2013, around 11.3 million Hindus left Bangladesh due to religious persecution and discrimination.

Mangesh Bende, the RSS leader from North Karnataka, who has been a guiding force for people like Bala, Ambareesh and others in the rehabilitation settlements says, if the Hindu population in Bangladesh reduced by more than half in the last two-three decades, that means they were either killed or have fled to countries. They violated the Liaquat-Nehru 1950 pact, which states that minorities on both sides [India and Pakistan] would be accorded full protection and citizenship rights.

“They wanted a Muslim nation. And we are giving shelter to those persecuted Hindus. So, what’s wrong if we profess a Hindu nation ideology?” Mangesh asks.

Sting operation was attempt to destabilise Yediyurappa govt, says so...