Inside Aarey: A tale of forest gumption

On October 6, as many as 29 people—tribal rights activists, environmentalists, an IT professional and students—were arrested by the Mumbai Police and sent to Thane and Byculla jails. They were slapped with various non-bailable charges and sent to judicial custody. Their crime? Coming in the way to save trees from being cut by the Mumbai Metro Rail Corporation (MMRCL) authorities for building a car shed for Metro-3 project on 33 hectares of the Aarey Milk Colony.

Aarey colony is a 1,287 hectare area with roughly 5 lakh trees abutting the Sanjay Gandhi National Park and the Mithi river.

Forty five-year-old Pramila Bhoir from Kelti Pada, one of the 27 recognised tribal settlements inside Aarey, was among those arrested and lodged in jail. She was released after two days.

Bhoir, an Adivasi belonging to the Warli indigenous tribe, was among the many from her community who have been protecting trees in the Aarey forest.

Everyone in her family is in some way or the other connected with protecting tribal culture and the environment, an integral part of the tribal life. While her son and daughter are into Warli painting (a form of tribal art), her husband Prakash Bhoir, an active participant in the Aarey campaign, has been working to preserve various forms of Warli tribal art, including singing and dancing.

“I am not sad that I got arrested. But I am sad that despite getting arrested, we couldn't save the trees from being cut. They are the lungs of Mumbai and we cannot let them go down like this,” she says.

Bhoir adds she is not fighting for herself, but also for the people living in the city for whom the loss of green cover should matter more.

Keep scrolling to see the graphic

As one enters Aarey, green pastures, marshy forests, tall trees, eco-friendly houses and a pleasant cool breeze—a marked change in ecology compared to the rest of Mumbai’s highrises and slum settlements—welcome its visitors. The Aarey colony, located in the northern part of Mumbai has marked a separate identity for itself with close to 3,500 tribal families engaged in agriculture and allied activities making a living inside the forest for decades. Many also engage in Warli painting work. 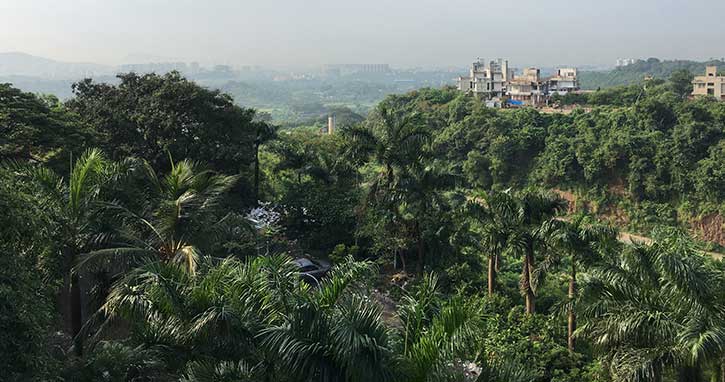 Age old trees, marshy bushes, and dense forest cover marks a difference in Aarey unlike in rest of Mumbai even as the MMRCL cut close to 2141 trees for the metro car shed project.

Ever since the government approved the Metro project in July 2013, environmentalists have upped their ante against the proposal. MML-3 or Metro 3 is a 33.5-km-long underground corridor running along Colaba-Bandra-Santacruz Electronics Export Processing Zone. The line will connect the residential areas with the financial centre of the city and is expected to benefit 17 lakh passengers daily by 2031. It was estimated to cost Rs 23,136 crore and Japan International Cooperation Agency (JICA) was roped in to provide a loan assistance to the tune of 57.2% of the total cost. Prime Minister Narendra Modi laid the foundation stone of the project on September 7, 2019.

The rail project sought to build a locomotive Metro car shed, a red-category (heavily polluting) industry, in about 33 hectares land. The land parcel is part of the 1,287 hectares spread of the area currently controlled by the forest department.

According to environmentalists, the project site, located on the banks of the Mithi River, could threaten Mumbai’s green lung and lead to flooding in parts of Mumbai. Activists argue that Aarey is an extension of Sanjay Gandhi National Park in the city and the car shed would pave the way for greater commercial exploitation of the area.

While petitioners had asked Aarey to be declared a flood plain and a forest, the Bombay High Court had on October 4 refused to declare the colony a forest.

About 40 per cent of the forest cover (525 acres) has already been diverted for various development projects including a film city, residential blocks for Force One (special anti-terrorism squad) and Maharashtra State Reserve Police Force as well as Adani electricity sub-station among other projects.

According to MMRCL's own estimate, about 2,185 trees were to be axed (they have cut 2,141 trees already) and another 461 would be transplanted. The company promises to plant six times the number of trees cut in different parts of the city. As per the tree census of 2017-18, there are about 29.75 lakh trees in Mumbai, of which about 4.8 lakh are within the Aarey colony.

While Metro officials claim the number of trees cut are negligible compared to the overall tree population in the city, it’s the failure of the government and MMRCL authorities to take into account the livelihood of people living in the region that is being questioned.

Bhoir’s husband Prakash, who’s been vocal about the atrocities committed by the officials on the forest as well tribals living inside Aarey, says it feels like a part of their body is being cut off.

Expressing his anguish at the authorities, he says, “How can they cut the trees in the middle of the night while they were sleeping. We are here to protect them and we are fighting for our existence.” 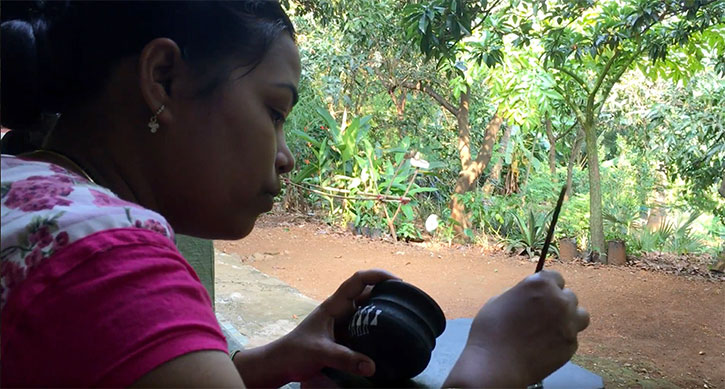 Shital Borhade, one for the members of Bhoir’s family, engaged in traditional Warli painting, an art form created by tribal people in Aarey.

According to Prakash, while the Metro project "encroaching upon" the forest land is in the news now, their fight dates back to 1949 when the first parcel of land was allocated for the Milk Colony in the name of dairy development.

Like many Adivasis, Prakash, too, is employed in the city. He works in the water department Brihanmumbai Municipal Corporation (BMC). He was also transferred recently based on a complaint by an unknown person accusing him of mobilising people against development projects.

While initially the tribals did not have to venture out for work and could depend on the forest for everything, things have changed now. With the green cover shrinking, people like Prakash feel the need to go out and work in the city has increased.

Apart from the Metro project, there is another proposal to set up a zoo within the green belt, which, activists say, would again lead to displacement of people.

“Slowly they (the government) are snatching away our land, our culture, heritage and freedom. It already feels like the land belongs to someone else,” he adds.

In Prajapur Pada, a hamlet near Birsa Munda Chowk within Aarey, about 70 families have already been shifted out and placed in Slum Rehabilitation Authority buildings in Kanjurmarg and others parts of the city.

While the Metro officials initially claimed the area was uninhabited and there were no trees, it later marked the trees to be cut and offered house-for-house as settlement. However, they did not take into account the agricultural land on which the tribals were dependent. 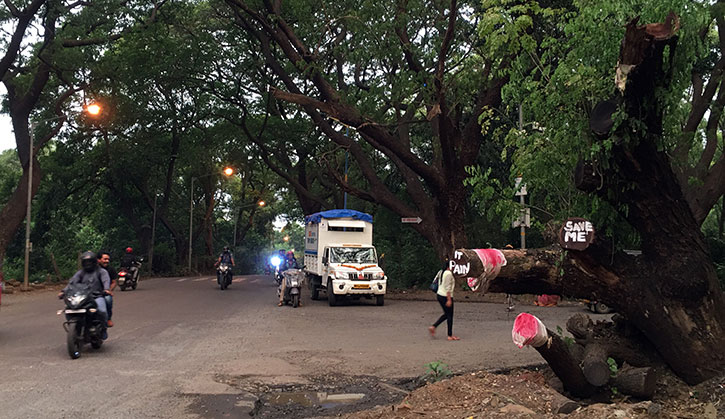 A sense of silence and fear lingered inside Aarey even as the government cut tress and arrested those who came to protect them.

About five people are fighting a case in the court for the same. Asha Bhoye, one of the petitioners in the case, shows different varieties of fruit trees in her backyard, which is now under the control of MMRCL.

“We live in big houses here and breathe fresh air. But the government is now offering us 270 sqft of land in a 15-floor apartment with no proper facilities,” Asha says.

Even though the Shiv Sena went against its ally, the BJP, in support of tribal rights in the Aarey episode, MoS housing and local Sena MLA Ravindra Waikar had told mediapersons that if all the tribals living in different settlements in Aarey are placed in one place, a large chunk of land could be thrown open for development.

Waikar, one of the early proponents of the Metro project, however, could not be reached for comments. Metro officials refused to comment, saying the matter is pending before the Supreme Court.

Various cases are pending in courts as well as the National Green Tribunal over environmental damages and violation of tribal rights. The hearing on Aarey in the Supreme Court, which had on October 7 restrained authorities from cutting anymore trees in the area, will come up again on October 21, on the day of the elections in Maharashtra.

The Metro officials barricaded the construction area and imposed section 144 (which prohibits the assembly of more than 4 people) under the India Penal Code for two days after protests erupted against the project.

A toxic hell and beyond

According to a 2018 report by IQAir AirVisual and Greenpeace, Mumbai was the most toxic city in the state and 71st most polluted in the world.

The fight for Aarey is beyond tribal resettlement, and in the larger interest of Mumbikars, says Prakash.

The dust layer on leaves of trees and shrubs in Aarey Colony, he adds, is much less compared to trees in Mumbai city. During non-monsoon months, a tree in Aarey Colony gives out more oxygen during daytime than the same tree growing along Mumbai's roadside, he says.

Despite all such arguments, the government still feels the project will have positive environmental impact overlooking the sustainable development model.

For people like the Bhoirs and Laxman Shakar Dalvi, who lives in Gaondevi Pada where the proposed zoo project threatens to eat into more forest land, the fight to save the green cover and tribal rights continues.

“We want to know why the government wants to suppress us. Is it because they are rich and we are poor, or is it because we belong to lower caste? The government needs to answer this one question,” Dalvi fumes.