As one travels from Jagdalpur to hinterlands of Dantewada in Chhattisgarh cutting through dense sal forests, remains of Maoist’s past carnages prop up now and then along the road, making one conscious of blood that has been splattered on this red corridor.

Last year alone, there had been 41 incidents of improvised explosive device (IED) blasts triggered by Maoists, who were also involved in 112 incidents of gun battles with security forces during this period. In these attacks, 19 security personnel and 46 civilians, including a BJP lawmaker from Dantewada, Bhima Mandavi, and several ultras were killed.   Overall, however, Chhattisgarh witnessed a 32 percent decline in Maoist-related violence last year compared to previous year.

As the jungles give way to paddy and corn fields and pinched- villages of mud-and-thatch houses start dotting the landscape, a new vista opens up, its purity untouched by decades of violence and apathy.

Here at night fall, villages still come alive with sounds of mandar (traditional drum), lilting folksongs and retelling of folktales, a throwback to a tradition preserved for centuries.

These nocturnal rendezvous are hardly ever over without narrating of tales from Adivasi versions of Ramayana. The storyline, however, differs depending on the demography of the village as each Adivasi group has woven its own plot into the main text, making the epic distinct and diverse.

The Ramayani of the Gonds, one of the largest tribes of this region, varies from the folk version of the classic of the Bhils, another major tribe of the area.

As the Bhil tribe generally abhors violence, in their folk version of Ramayana, there is no war. They believe, Ravana, the ten-headed demon king, after realizing his mistake returned Sita to her husband Rama without any bloodletting.

In the Gond Ramayani, the central character is Rama’s younger brother Lakhsman, who, according to one tale, got married to Ravana’s daughter Rani Pufaya who had great magical powers.

Many Gonds even worship Ravana, whom they consider to be the tenth dharmaguru of the tribe.

Notwithstanding the variations, Ramayana is an integral part of the folk culture and tradition of these ancient tribes, who have found mention even in the classical version of the great epic.

In villages along the Mahanadi river, mainly in Janjgir-Champa, Raigarh and Bilaspur districts lives a century-old sect whose followers tattoo their bodies with the name of Lord Rama.

In his book “Rapt in the Name: The Ramnamis, Ramnam, and Untouchable Religion in Central India”, Professor Ramdas Lamb of University of Hawaii, wrote that in the 1820s a group of Chamars (Scheduled Caste) became Ramnami, abandoning their caste-mandated occupation of disposing animal carcasses and working with hides and leather, and took up farming, pottery and metalwork.

The religious movement, many say, is the continuation of the Bhakti tradition of the 15th century mystic poet-saint Kabir. It started as an act of defiance after the community members were prevented from entering Hindu temples and worship Hindu Gods. Through the body inscription, the community demonstrates that god is nirguna (unmanifested) and sarvabhoota (omnipresent).

Though the community, with the advent of education and modernization, is giving up the practice of tattooing the body with the word Rama, the recital of Tulsidas’s epic poem Ramcharitmanas is part of their daily lives.

In Chhattisgarh, as in other parts of Hindi heartland, Ram and Ramayana symbolise inherent contradictions in the construct of greater Hindu society, but at the same time they transcend societal divide in a manner perhaps no other Hindu deity or religious text does.

No wonder, Ram is the biggest Hindutva icon.

It is this Hindutva legacy that the Congress is trying to usurp, even as the original proponent of Ram-politics, the BJP has promised to build a sky-kissing temple of Lord Rama in Ayodhya in Uttar Pradesh.

In the competitive religious politics, the Congress’s answer in Chhattisgarh to the BJP’s temple push is a development of tourist corridor based on mythical route undertaken by Lord Rama, Sita and Lakshman during the course of their 14 years in exile.

Barely two weeks after the Supreme Court’s verdict on Ayodhya that paved the way for construction of the Ram temple, the Chhattisgarh government in a cabinet meeting chaired by chief minister Bhupesh Baghel decided to develop important places on the ‘Ram van Gaman Path’ as tourist spots. 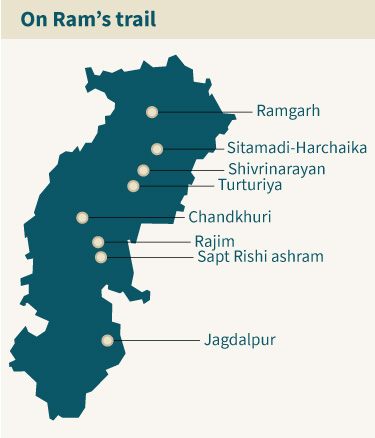 The decision is based on mythological beliefs that the state was once part of the Dandakaranya, the fabled forest though which Rama passed through during his exile.

According to the state government as per various research studies published Rama had crossed nearly 75 places in Chhattisgarh during his exile in the forest. In 51 out of these 75 places, he had stayed for a while.

The state’s home and tourism minister Tamradhwaj Sahu said “Lord Rama is referred to as the ‘first tourist’ to have entered the Chhattisgarh, mentioned alternatively as ‘Dakshin Kaushal’ and ‘Dandakaranya.’

He said Rama spent in Chhattisgarh 10 out of 14 years of his exile.

In the first phase, eight of the selected places will be developed.  These places include Sitamadi-Harchaika in Koriya district, Ramgarh in Sarguja district, Shivrinarayan in Janjgir-Champa district, Turturiya in Balodabazar-Bhatapara district, Chandkhuri in Raipur district, Rajim in Gariaband district, Sapt Rishi ashram in Dhamtari district, and Jagdalpur in Bastar district.

A four-member team has been constituted to survey these eight proposed spots and develop necessary facilities. For the purpose a concept plan of Rs 92.32 crore has been earmarked

The Congress government in the state, which completed one year of its tenure in December last, already started implementing the ambitious project be renovating and giving facelift to Mata Kaushalya temple, dedicated to the mother of Rama, in Chandkuri village, some 30 km from the state capital Raipur.

The Congress government, however, cover its communal intention under the sheath of development claiming the tourist circuit will give a new identity to the state in the country’s tourism map. The boost in tourism, it claims, will also keep the Maoists at bay by generating employment opportunities for the local youth. But beyond this public posturing of tourism development, the party functionaries admit in private, the move aims to cut into BJP’s Hindutva territory.

The BJP, naturally, questioned the Congress’s motive. “This is just vote-bank politics. This party neither believes in Ram Sethu nor in Rama’s existence,” alleged BJP’s state spokesperson Sachidanand Upasane, determined not to give its rival any leeway in its political space.

The Congress government in neighbouring Madhya Pradesh too undertaken a similar tourism project to developed places in the state believed to be associated with Rama, indicating a pattern to the political semantics.

The Congress’s Hindutva tilt in Chhattisgarh is also evident from the priority it’s giving to the development of day-care shelters for cows, considered sacred in Hinduism.

According to a government statistics, the state has 1.28 crore cattle, of which 30 lakh are stray. For their upkeep, the government has so far built 2000 gauthans (cow shelters) across the state utilizing 30,000 acres of land provided by the villagers. It has a plan to build another 1000 shelters in a year or so.

Each gauthan is spread over a minimum of five acres of land and is equipped with water drainage and basic livestock infrastructure, with an adjoining grazing area.

Village committees have been constituted to run these gauthans, under the village sarpanch and local cattle owners.

The Congress, however, insists the scheme should not be linked to religion. Baghel said his government was committed to promote and protect ‘Chhattisgarh ke chaar chinhaari – Narwa Garwa Ghurwa Baari’ (Chhattisgarh’s four symbols—rivulets, cows, compost pits and gardens).

But his government’s enthusiastic participation in Govardhan Puja in October last year commemorating it as “Gauthan Divas” to emphasis protection of cows, and alacrity to promote mythological sites surely gave a saffron semantics to the Congress’s new development model.

Growth rate going down and yet, PM dwells on love jihad, says Sibal