A pre-poll survey conducted by the APT Research Group for Puthiya Thalaimurai TV gives the MK Stalin-led DMK Front 151-158 seats, while the EPS-led AIADMK Front may have to contend with 76-83 seats in the 234-seat Tamil Nadu assembly. 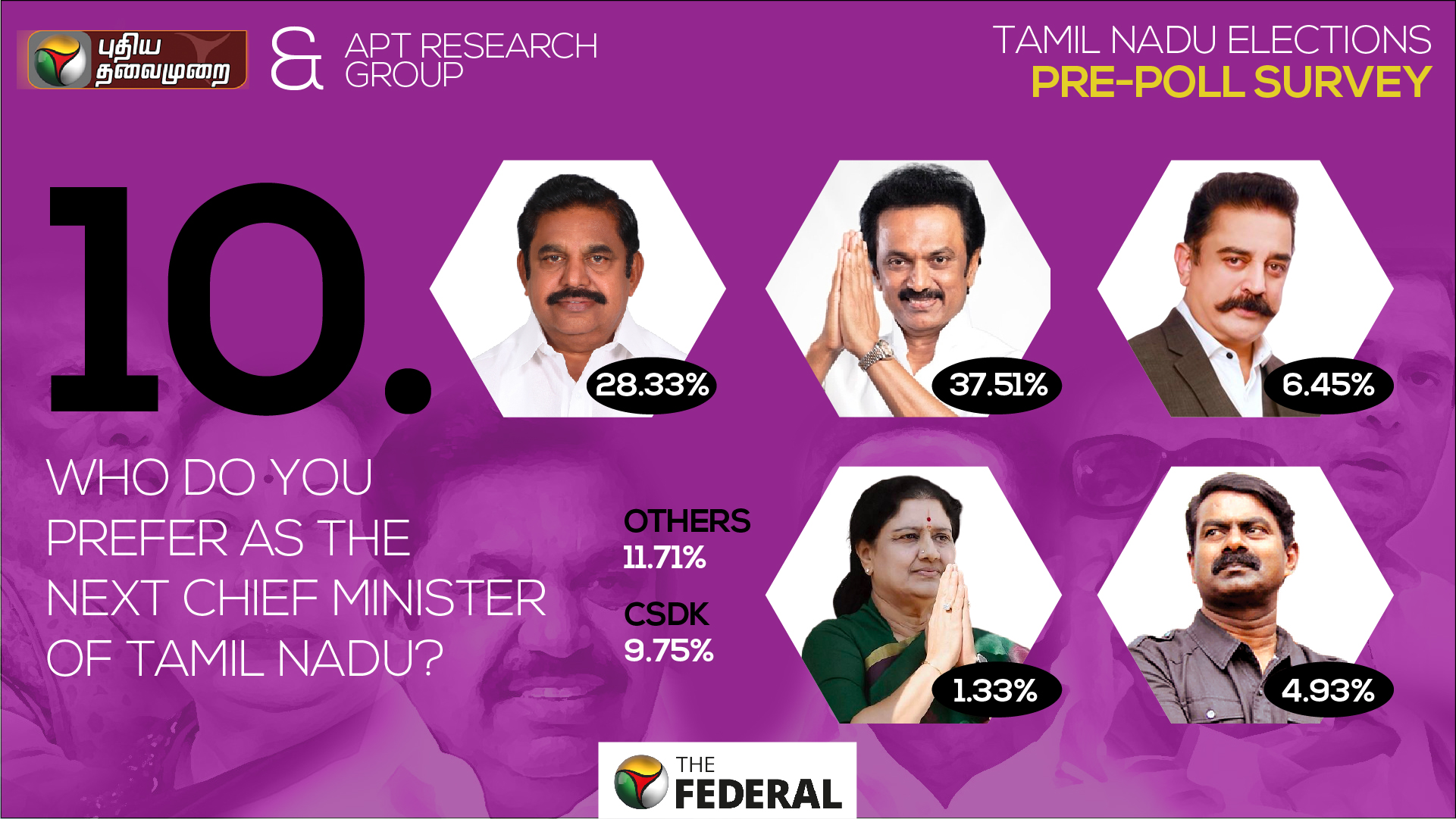 The survey shows present Chief Minister and AIADMK leader Edappadi K Palaniswami (EPS) may struggle to retain the CM’s post, although there is no strong anti-incumbency wave against the government of the day.

As much as 37.51% of people surveyed said they see Stalin as the next CM in an election, which is the first in the absence of any stalwarts of the Dravidian movement like M Karunanidhi, J Jayalalithaa and MG Ramachandran.

EPS seems far behind with just 28.33% voters saying they want him to continue as the CM of Tamil Nadu, which goes to polls on April 6.

A meagre 6.45% voters want to see actor Kamal Hassan as the Chief Minister.

Despite the presence of Hassan’s Makkal Needhi Maiam (MNM) and Sasikala’s nephew TTV Dhinakaran (Amma Makkal Munnetra Kazhagam), voters clearly see this election as a bipolar contest between AIADMK and DMK with Stalin’s party estimated to get 38.51% votes as against EPS’ AIADMK getting 28.39% votes. 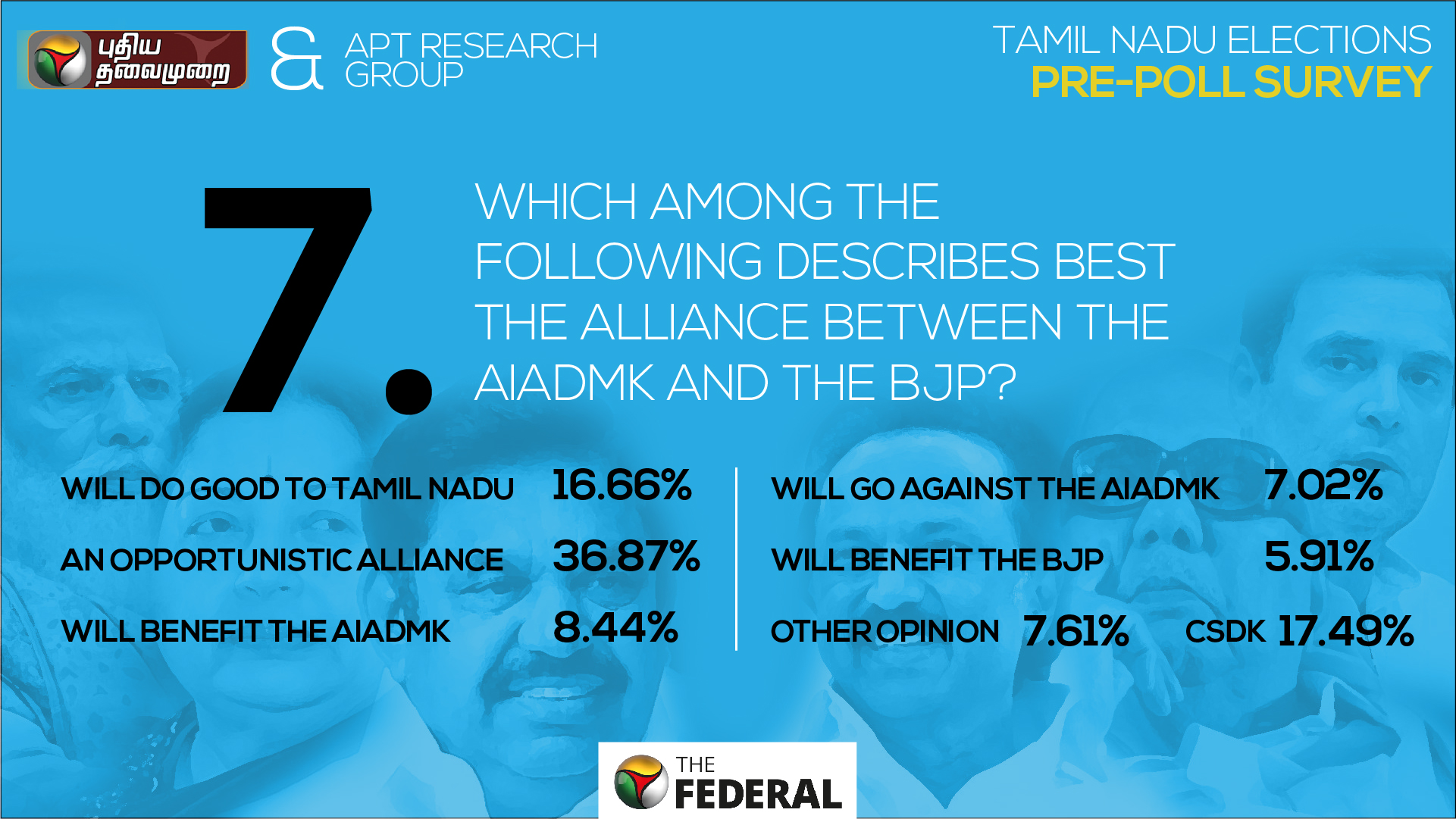 The DMK Front, which includes Congress, draws its strength from Stalin’s leadership (37.96%), support for farmers’ protest (81.20%) and a perception that the erstwhile Congress government led by Manmohan Singh did more good to Tamil Nadu than the present Modi government (60.03%). Modi’s magic clearly doesn’t seem to be working here as 37% said the AIADMK-BJP pact is at best ‘an opportunistic alliance’.

A large chunk of respondents (40.55%), who said that their economic condition has still not improved, are backing the DMK Front.

A significant number (39.44%) of voters say price rise is drawing them towards the DMK. About 29% voters support AIADMK-BJP alliance on the inflation front.

V K Sasikala, late Jayalalithaa’s confidant, has failed to make a mark on average voters as an overwhelming number (73.09%) of respondents said that they neither support nor oppose her becoming the General Secretary of the AIADMK once again.

EPS gets good rating, but…

EPS hasn’t done bad considering he wasn’t the first choice to become the CM after Jayalalithaa’s demise. About 36.87% of the respondents gave EPS a good approval rating, ranging between 6 and 10 points (on a scale of 1 to 10); 31.31% gave him a score ranging between 1 and 4 while just 4.91% of respondents gave him a zero. This shows there is no anti-incumbency against the present government.

About 34.41% of the respondents have said that their financial position has not returned to normal. This could be an electorally significant factor. Any party manifesto addressing this issue could gain electorally, says the Apt Research Group’s pre-poll survey.

The survey considered 20 constituencies (grouped into 5 zones) based on their past electoral performances. 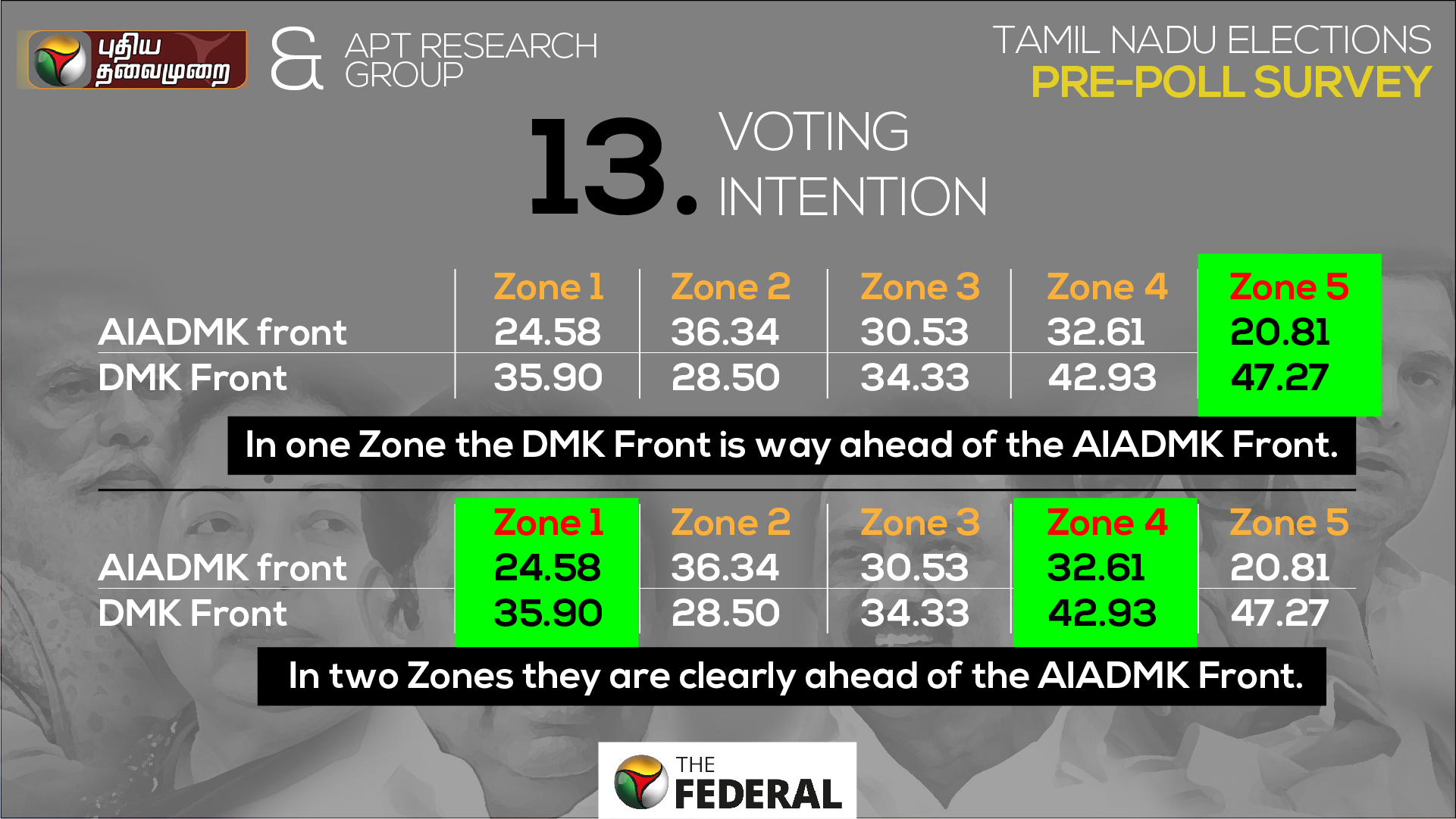 The zone-wise findings are as follows:

The DMK Front is ahead of the AIADMK Front by 10.32 percentage points.

The DMK Front is ahead of the AIADMK Front by 11.32 percentage points.

The AIADMK Front is ahead of the DMK Front by 7.84 percentage points.

DMK Front is ahead of the AIADMK Front by just 3.8 percentage points, a close contest indeed.

The DMK Front with a 26.46 percentage point lead is way ahead of the AIADMK Front.

Overall, it seems Stalin may just be able to wrest the state of Tamil Nadu from the AIADMK-BJP alliance, which gained strength only after Jayalalithaa’s death. The DMK-led alliance, which swept the 2019 Lok Sabha polls, is likely to repeat its winning performance though the AIADMK Front is still in the reckoning.

38.20% of the respondents said that they will vote for the DMK Front.

28.48% of the respondents said that they will vote for the AIADMK Front.

6.30% of the respondents said they will vote for Kamal Hassan’s MNM.

Tamil Nadu goes to the polls on April 6 and the results will be declared on May 2.