Farmers’ issues have occupied the centre stage in this election in Tamil Nadu. While on one hand, farmers across the country are unhappy with the three new legislations brought by the BJP-led Union government, on the other hand Tamil Nadu farmers are fighting their own battle against so-called development projects, which threaten their survival. The Salem-Chennai Expressway project is the most prominent among them.

Soon after the death of former Chief Minister J Jayalalithaa, the state witnessed a series of protests starting with Jallikattu, hydrocarbon project in Cauvery delta (Neduvasal), the Sterlite agitation where farmers were caned and fired at in Thoothukudi, and over farm loan waiver.

Notable among the controversial development projects is Tamil Nadu Chief Minister Edappadi Palaniswami’s pet project, the Salem-Chennai Expressway, which threatens the livelihood of nearly 10,000 farmer families. The ambitious project is backed by the Union government. 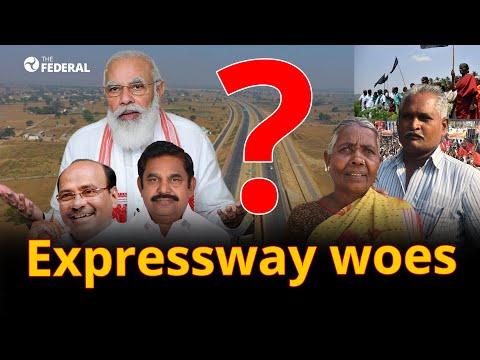 While the government says the project, estimated to cost Rs 10,000 crore, will reduce the travel between Chennai and Salem by half to 2.5 hours, farmers argue that development should not come at the cost of their livelihood. They are pleading with the government to expand the existing highway and not to build a new corridor altogether. The project cuts through reserve forest, water bodies, agriculture land, which has been opposed by farmers and environmentalists.

The Centre and the All India Anna Dravida Munnetra Kazhagam (AIADMK) in the state steered through the 227.3 km expressway project without proper consultation with local communities. Even the Supreme Court granted a go-ahead to the project in December 2020, asking the state government to conduct a fresh survey for land acquisition.

Aggrieved farmers in Salem, Dharmapuri and Thiruvannamalai have vowed to vote out the BJP-AIADMK alliance. In several villages, farmers affected by the project and the farmers’ associations were seen campaigning against the ruling dispensation. They are pinning their hopes on Dravida Munnetra Kazhagam (DMK) as its chief ministerial candidate M K Stalin and ally Congress have assured the farmers that the project will be stalled if they are voted to power.

As one crosses Salem city and move towards Tiruvannamalai, lush green forest cover, small settlements beneath the hills and agricultural fields, replace the views of bridges and flyovers and wider roads of Salem city.

Periannan and Vijayalakhsmi, whose family of eight is dependent on farming, are set to lose 3.5 acres of land to the expressway project as per the old survey. Besides the standing crops of paddy, areca nut, mango and banana and coconut plantations, he also stands to lose the well and the house they live in. “How can Edappadi (the Chief Minister) blatantly lie saying only 6,400 trees will be cut for the project. In my land alone there are close to 2,800 trees of different types,” says Periannan, adding that 75% of the land is wetland and not marshland as shown by the government in the project report.

Vijayalakshmi looks unimpressed with the election season on and several politicians making speeches in favour of farmers and assuring them freebies. She says the government need not give them any benefit or freebies, but just let them live with their land. “We don’t need the Rs 1500 allowance. We don’t need the washing machine. We don’t need subsidized rice. Just let us live with our land and scrap the eight-lane expressway project,” Vijayalakshmi says.

Varudhiammal,  a farm labourer, who travels from Palappadi village in Salem to Kombur for work, says out of desperation that if the government is so keen to implement the project, let them kill the farmers and build the road. “On both sides there are hills. If they lay the road how can we come from the hills to the village? For us our agriculture land is our life. If they destroy that, where will we go?” she asks.

Varudhiammal says she earns Rs 200 a day if she works in the field. With the rising prices, she cannot afford to buy rice at Rs 60 a kg or vegetable at Rs 50 a kg. So all she wants is the government to stop the project.

Farmers across the district are furious over losing land. In Adimalaipudur village in Salem, Unnamalai Ammal, 72, who was at the forefront of the protest against the project in 2018, says her family lives in agony day in, day out, thinking when they would lose their land. Eight of her family members were beaten, taken into custody and kept in a convention hall when the officials surveyed the land. Besides, they were forced to sign a paper which said they had given up their land, she says. Her family will lose about 4 acres of land.

“The politicians promise us up to Rs 3,000 per vote. But we don’t want the money. The difficulties that we have been facing for the last 2.5 years are more than enough,” says a worried Unnamalai Ammal.

“Last time we fought against the police force, but they eventually overpowered us. But this time I will use the machete that I have for cutting grass to stop them. I don’t mind going to jail if they lay hands on my family members,” says an angry Unnamalai Ammal.

N Imeyeswaran, Naam Tamilar Katchi’s Salem North candidate, said that it’s not logical to say that only the new expressway will help people reach Chennai faster, because we already have trains and flight service between the two destinations.

Congress’s Salem candidate Mohan Kumaramangalam said it’s an unworthy project which was brought in a hurry and was never really planned well. “The Salem-Chennai expressway has been presented by the current government, including the Union government, as a project that is absolutely needed. The livelihood of many will be lost for something that will not be in the greater good of this region,” Kumaramangalam told The Federal. “My stance and our alliance’s stand is that this project is not needed. We will scrap it,” he added.

Krishnamoorthy, a farmer leader from Dharmapuri, who filed a case in the High Court appealing against the project, says that though the DMK did not mention scrapping the expressway project in its manifesto, they made a promise outside of it both during the current election and also during the last Lok Sabha election.

Palaniappan, another farmer from Kombur village, said the current ruling dispensation doesn’t listen to whatever farmers say and they are only interested in looting mineral resources by bringing in the project.

“Our voices are not heard by the ruling AIADMK-BJP government. If they still have to go ahead with the project, let them bury us alive and go ahead. We are campaigning against them and convincing farmers and other organisations to vote them out,” Palaniappan said.