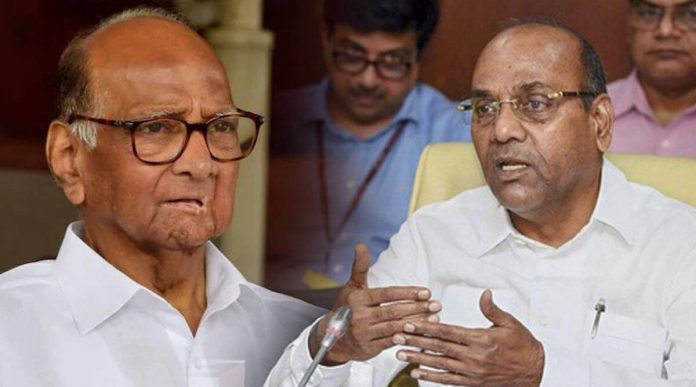 The NCP was formed after backstabbing Congress. No matter how many titles the world may give him (Pawar), he cannot be our guru, said former Union Minister and Shiv Sena leader Anant Geete. Pic: PTI

Anant Geete, a Shiv Sena leader and a close aide of Maharashtra Chief Minister Uddhav Thackeray set the cat among the pigeons by openly criticising NCP supremo Sharad Pawar at a party function on Monday (September 20), even as he took a dig at the amorphous nature of the ideologically different allies of the MVA government.

The Shiv Sainiks will never accept a “backstabber” like NCP chief Sharad Pawar as their “guru”, said former Union Minister Geete, adding that the the tripartite Maha Vikas Aghadi (MVA) government comprising Shiv Sena, NCP and Congress was just a political compromise, an “adjustment” for power.

Speaking at a party function at Raigad, Geete blithely lashed out at Pawar, who is widely regarded as the architect and anchor of the MVA government, which came to power after the 2019 Assembly elections after a fallout between the Sena and BJP, said an Indian Express report. Sena and BJP had shared power from 2014 to 2019.

Pawar was accused of “back-stabbing” in the past when he defected and unseated a Congress government led by Vasant Dada Patil in 1978 and became the youngest chief minister of Maharashtra by forming an alliance with other parties.

“NCP was formed after backstabbing Congress. No matter how many titles the world may give him (Pawar), he cannot be our guru. Our guru is only (late) Balasaheb Thackeray. The Mahavikas Aghadi is merely an adjustment for power,” said Geete, adding that he had no “ill-intention” towards the Sena-led MVA government, said media reports.

Geete, the former Union Minister for Heavy Industries and Public Sector Enterprises, was addressing a political meeting in which a few local NCP leaders had joined the Sena fold.

The Shiv Sena immediately went on damage control mode with Shiv Sena spokesperson and Rajya Sabha MP Sanjay Raut distancing the party from Geete’s comments. “Sharad Pawar is a national leader and at this moment, we are together in the government which is functioning properly…., said Raut, adding that Geete is not connected with the government and that some leaders may have personal opinions.

A Hindu report quoted Raut as saying that everyone had accepted Uddhav Thackeray’s leadership. And both Thackeray and Pawar were “tall leaders of the State”. “The MVA leadership has nothing to do with Geete’s remarks. The government will complete its five-year term without any hitch,” said Raut, added the Hindu report.

According to Geete, the government will go on as long as it functions. But if they separate, their home was the Shiv Sena. “The Shiv Sainiks don’t need to think about the Aghadi (MVA alliance) but they need to think of retaining power at the local bodies in our areas. The senior leaders of the party will take a call on what should be done at the state level,” he stated, said media reports.

Expressing displeasure at Geete’s comments which had created an unwarranted controversy, NCP leader Shashikant Shinde asked for some restraint from MVA leaders while making public statements. Earlier too, Maharashtra Congress chief Nana Patole had spoken disparagingly of NCP chief Pawar, and the latter had brushed him off as small fry.

Meanwhile, the BJP party jumped in with glee to highlight the fragility of the MVA alliance with this latest development. Senior BJP leader Sudhir Mungantiwar commented that Geete had spoken the truth.

The NCP is just a party of selfish leaders concerned with wealth and power, said Mungantiwar, adding that the Sena had made a historic mistake by forming this alliance.