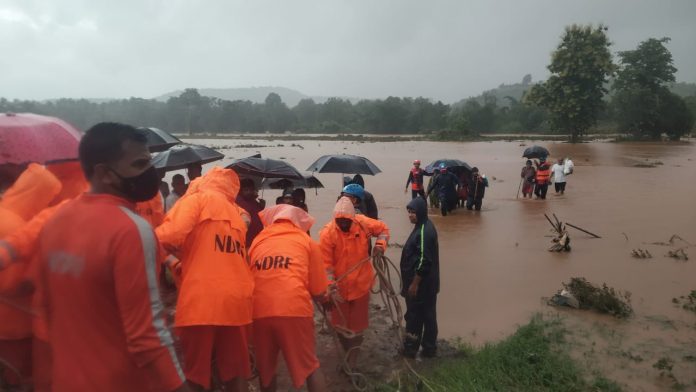 To help in the rescue operations, teams from the Navy, the coastguard and the National Disaster Response Team (NDRF) have been roped in. Pic: Twitter

As rains continued to batter Maharashtra’s Konkan region, 36 people died in landslides in Raigad district. Thousands were stranded in floods and landslides, and helicopters are being deployed for evacuation, media reports said.

In an appeal to the residents of affected areas, authorities asked them to move to rooftops or other higher floors, from where the rescue teams in helicopters can spot and evacuate them, said an NDTV report. The state is said to be seeing the heaviest rain in July in about four decades.

Yesterday, three landslides led to several fatalities. Around 32 bodies were located in one spot and four others in another spot, said the report. Chief Minister Uddhav Thackeray took stock of the situation consulted with local authorities today, it added.

Following 24 hours of rain, water levels rose up to 12 feet in parts of Chiplun, a coastal town in Ratnagiri district, said NDTV. As River Vashishti overflowed, it submerged roads and homes.

A dedicated COVID facility was surrounded by water, and patients had to be rescued in boats, it added. There’s no power supply, and phone connections are patchy.

The NDTV report said the weather office has issued red alerts for various regions across the state. Heavy rainfall is likely to continue for a few more days.

To address the damage caused by the inundation, rescue teams from the Navy, the coastguard and the National Disaster Response Team (NDRF) have been roped in.

CM Uddhav Balasaheb Thackeray held an emergency meeting to take stock of the flood situation in Ratnagiri and Raigad districts caused due to torrential rains in the last 24 hours.

He made the following points; pic.twitter.com/jW5IJRSNja

The report said Maharashtra faces a dual challenge — floods and COVID. Thackeray has directed state government officials to make sure the flooding does not hinder the treatment of COVID patients.