Governor Bhagat Singh Koshiyari has invited caretaker Chief Minister and BJP leader Devendra Fadnavis to form government in Maharashtra, bringing an end to weeks of uncertainty over the issue.

This comes a day after he met the Governor and tendered his resignation as the chief minister.

On Saturday (November 10), all four parties – BJP, Shiv Sena, Congress and NCP held a series of internal meetings to discuss the formation of government in Maharashtra.

The invitation from the governor ends the uncertainty over the formation of the government in the state, which found itself in a spot due to a power tussle between allies BJP and Shiv Sena, which got the mandate in the recently concluded assembly elections.

The results of the October elections had declared the BJP as the single largest party with 105 seats in the 288-seat in the assembly. Its ally Shiv Sena had bagged 56 seats. In the opposition camp, Congress had won 44 and NCP 54 seats. As many as 13 Independents had also won in the October 21 elections.

The deadlock between the BJP and the Shiv Sena pertains to a hard bargain between the two parties over the latter’s demand for a rotational chief minister. The Shiv Sena has time and again recalled the 50:50 power sharing deal that the two parties had reportedly negotiated, ahead of the assembly polls, in support of their demand for equal sharing of the top post.  However, an adamant BJP had not been in favour of having anyone else in the top post than Fadnavis.

This could have been a prestige issue for the BJP as Fadnavis was its chief ministerial candidate and was promoted by Prime Minister Narendra Modi himself. Also, he has been the first non-Maratha chief minister of the state and the second Brahmin to hold the top post after Manohar Joshi.

The BJP needs the support of at least 40 more legislators than what it already has, to form a majority government in the 288-member assembly. And even if it manages to gather the support of all the 13 Independents, it will fall short by 27 seats.

However, if now, Fadnavis goes on to form a minority government of the BJP, it will be at the mercy of the Shiv Sena and the opposition, which may topple the government, any time, if they unitedly move a no-confidence motion. The BJP may avoid such a scenario if it sorts out its differences with the Shiv Sena and forms a coalition government. 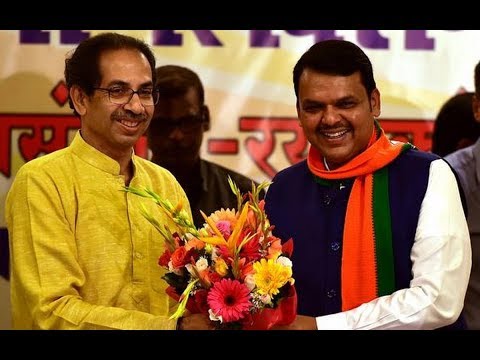