Union Home Minister Amit Shah on Tuesday (November 13) said that even now if any party has the required numbers to form government in Maharashtra they can approach the governor. This is the first time the union minister commented on the political situation in the state since the October assembly elections.

“Before this, 18 days were not given to any state. The governor invited parties only after assembly tenure ended. Neither Shiv Sena nor Congress-NCP staked claim and neither did we. Even if today any party has the required numbers it can approach the governor,” he said while speaking to news agency ANI.

“Before elections, the prime minister and I said many times in public that if our alliance wins then Devendra Fadnavis will be the CM, no one objected back then. Now they (Shiv Sena) have come up with new demands which are not acceptable to us,” he said.

Earlier in the day, Shiv Sena chief Uddhav Thackeray on Tuesday met Congress leaders Ashok Chavan, Balasaheb Thorat and Manikrao Thakare at a suburban hotel in Mumbai. Following the meeting, he told reporters that talks over government formation in Maharashtra were progressing in the “right direction” and a decision will be taken at an appropriate time.

Meanwhile, Maharashtra Congress MLAs, who had been camping at a resort in Jaipur for the last five days amid political impasse in their state, left for Mumbai on Wednesday.

The Congress and the NCP, which remained indecisive on Tuesday despite a top-level joint discussion over supporting a Shiv Sena-led government in Maharashtra, are expected to resume talks over the issue. Reports suggest that Congress leader Ahmed Patel met Sena chief Uddhav Thackeray late on Tuesday night to negotiate terms of a possible coalition.

The NCP has named its five members for a joint committee to be formed with the Congress for deciding a ‘common minimum programme’ before their possible alliance with the Shiv Sena for government formation in Maharashtra. Ajit Pawar, Jayant Patil, Chhagan Bhujbal, Nawab Malik and Dhananjay Munde will be part of the committee.

In a new twist, NDTV reported quoting sources that the NCP is likely to demand the chief minister’s post on a rotational basis among its other demands to stitch an alliance with the Shiv Sena. 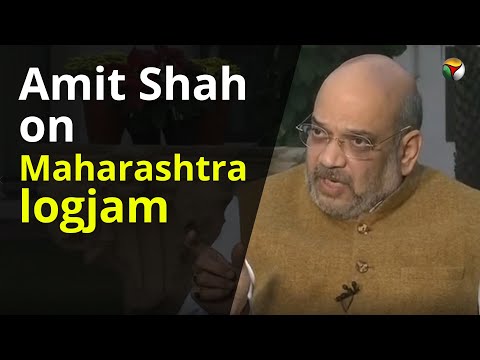 Meanwhile, a lawyer representing the Shiv Sena said that the party has preferred not to mention their petition, which challenged the Governor BS Koshyari’s refusal to grant more time to the party for government formation, in the Supreme Court on Wednesday. This comes a day after President’s rule was imposed in the state amid the looming uncertainty over government formation.

The Shiv Sena, the second largest party in the state with 56 seats, in its mouthpiece ‘Saamana’ defended its decision to negotiate a power-sharing deal with the opposition alliance, the Congress and the NCP. It also recalled how BJP tied up with parties like PDP in Jammu and Kashmir and TDP in Andhra Pradesh to form government.

The editorial further said that the party was ready to do whatever it takes to form a stable government in the state. “After partaking of ambrosia laced with a drop of poison with the BJP, we are now ready to end this instability in Maharashtra by assuming the role of ‘Neelkanth’. To explain that in the language of Hindutva, Chhatrapati Shivaji worshipped Lord Shiva who consumed poison, and the Sena is devoted to Shivaji,” the article said.

Meanwhile, ailing Sena leader Sanjay Raut was on Wednesday afternoon discharged from Lilavati hospital. He underwent an angioplasty procedure on Monday, but has been active on Twitter and vocal about the current political situation in the state.

On Wednesday morning, he tweeted the word ‘agneepath’ three times, apparently to indicate the difficult path ahead for his party in its efforts to form government in Maharashtra with the Congress and NCP. Agneepath is a famous poem by renowned literarian Harivansh Rai Bachchan. It was also the title of a 1990s Hindi blockbuster featuring megastar Amitabh Bachchan, which depicted how the protagonist literally traversed the path of fire in his quest for justice.

The current political situation arose from a hard bargain between saffron allies, the BJP and the Shiv Sena, over the post of chief minister that led to the alliance’s failure to form a coalition government.

Allies BJP and Sena could have easily proved majority together and form a coalition government had they not entered into a power tussle. Since the BJP had backed off saying it does not have the numbers to form government, the Shiv Sena was expected to form an alliance with the NCP and Congress, which together will have 154 MLAs. According to NCP and Congress leaders, who met a day earlier, further discussions will be held on the terms of forming a Sena-led coalition government in Maharashtra.