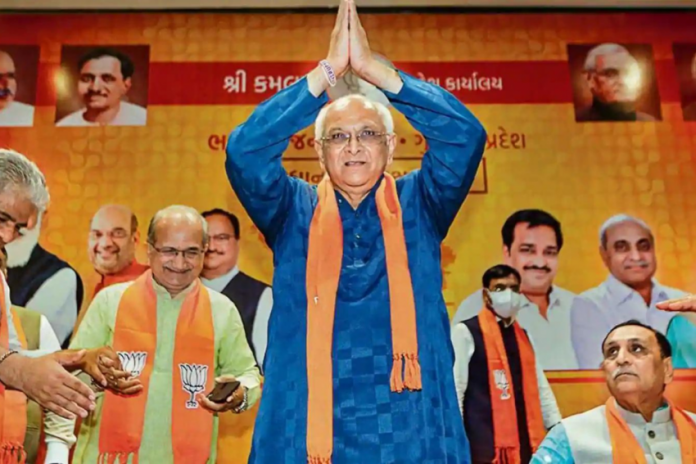 State Assembly Speaker Rajendra Trivedi, who had resigned from his post on Thursday (September 16) morning, has been inducted as minister in the cabinet of the new Chief Minister Bhupendra Patel’s cabinet along with 23 other ministers, including former state BJP president Jitu Vaghani, who were sworn-in on Thursday in a ceremony at Raj Bhavan in Gandhinagar.

It is significant that no minister from the earlier Vijay Rupani-led ministry was inducted. This change of guard has not been as smooth as the BJP top leadership, especially Home Minister Amit Shah, would have expected. As several ministers from the outgoing government were fighting as they were not keen to relinquish their posts.

Bhupendra Patel however decided to drop all ministers of the Vijay Rupani government and has brought in an all-new Cabinet.

Governor Acharya Devvrat administered the oath to 10 cabinet ministers and 14 Ministers of State, including five Ministers of State with Independent charge. Bhupendra Patel, who was sworn in as the 17th chief minister of the state on Monday, was present at the Raj Bhavan ceremony, along with Rupani, whose sudden resignation from the post on Saturday led to the formation of the new ministry.

The post of the Speaker has gone to Nimaben Acharya, an MLA from Bhuj.

Earlier in the day, submitting his resignation to the Deputy Speaker, Trivedi, an MLA from Raopura in Vadodara, said he was quitting with immediate effect. Previously, he had been a minister (in-charge) of state for sports, youth and cultural activities, and pilgrimage development.

His dramatic and sudden resignation was quickly followed by a notification issued by the Gujarat Legislature Secretariat which stated that Trivedi would cease to be the Speaker from “16th September 2021, forenoon”, said media reports.

An Indian Express report quoted from the notification issued by the secretary of the Gujarat Legislative Assembly, DM Patel, that Rajendra Trivedi has by writing under his hand resigned from the office of the Speaker of the Gujarat Legislative Assembly with effect from September 16, 2021 forenoon. “Therefore, the Office of the Speaker in the Assembly has become vacant from September 16, 2021, forenoon,” read the notification.

Trivedi, 65, had assumed office as the Speaker on February 19, 2018, taking over from Ramanlal Vora.

According to an NDTV report, several senior ministers, like former deputy chief minister Nitin Patel, had been worried that they would be dropped from the new ministry, and were fighting to keep their posts.

Also, Thursday’s oath-taking ceremony was initially set to be held on Wednesday but was deferred at the last minute, reportedly because of differences over the new council of ministers.

However, media reports indicated that chances of an open revolt in the party were not very high as the change of guard was being spearheaded by Amit Shah, on the insistence of Prime Minister Narendra Modi. Developments in Gujarat have also come in the wake of reports that winning the state Assembly elections in 2022 could become a challenge if Vijay Rupani had continued as the CM.

The BJP, however, had probably not expected much dissent from the party leaders in the state considering Vijay Rupani had resigned without a demur. Moreover, Bhupendra Patel took charge without any opposition except for some protest from Nitin Patel, who had probably wanted to be anointed as the next CM.

Further, the NDTV report quoted an MLA as saying that senior state leaders will have to toe the line of the top leadership. No politician, especially in the BJP in Gujarat, could go against their decisions and challenge them. Earlier, Amit Shah had tried to iron out issues over the council of ministers and the new cabinet after the CM’s swearing-in ceremony on Monday.