Decades ago, as a young armed Naxalite, Seethakka was familiar with the routes cutting through the dense forest in Telangana’s Mulug region. Now, as a local MLA, she is back trekking through the same routes. The only difference is that she is not carrying a gun this time, but stocks of vegetables and grains for distribution among the poor families.

The two-time Congress MLA from Mulug, the Scheduled Tribe-reserved constituency in Telangana, is earning wide appreciation for her work in reaching out to the poor in the time of coronavirus pandemic.

Each day, Danasari Anasuya, known popularly in the constituency as Seethakka, sets off at 8 am with rice, vegetables, and other food essentials. Aided by her followers, she has taken it upon herself to reach out to the poor and needy.

On an average, she covers about ten villages only to return late at night. 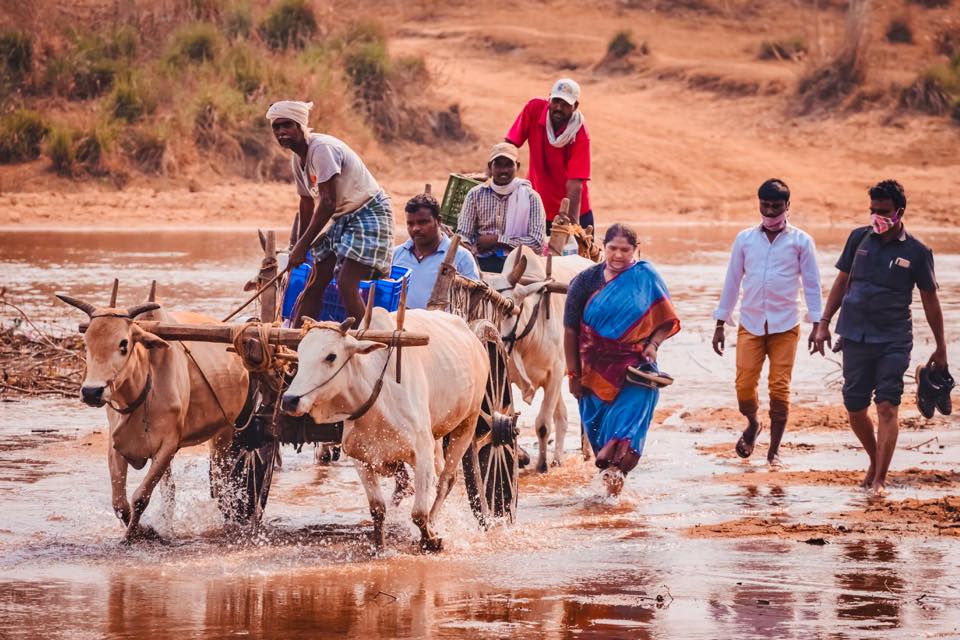 The 49-year-old legislator has been a Maoist for over 15 years before joining the mainstream politics. She was first elected to the State Assembly from the tribal-dominated constituency in 2009 and again in 2018.

Seethakka has been undertaking long and arduous journeys since March 26, often on bullock carts and even on foot, to reach remote villages in the forest area with essential supplies.

So far, she has covered over 150 villages and hamlets.

The MLA would often go on foot in areas that don’t have proper road connectivity, crossing lakes, and other water bodies. Once at the villages, she explains to people the public health emergency at hand, and the need to maintain social distance and personal hygiene.

“Many of the people in Mulug have no idea what is happening or why we are in lockdown. Due to restrictions on supply lines, some villages have been completely cut off. And no one, not even the government, is trying to help these villages,” the militant-turned-politician told The Federal.

Using a network of local municipal liaisons, Seethakka manages to keep herself abreast of the needs of her constituency, even amid the lockdown.

Over 70 of the 650-odd villages that make up the constituency have no road connectivity.

Criticising the Telangana Rashtra Samithi (TRS) government for not doing enough to help the people in distress, the Congress MLA argued that the government’s offer of cash assistance of ₹1500 and 12 kg rice per family was “impractical” in a constituency like hers where large swathes of land were covered by dense forests. 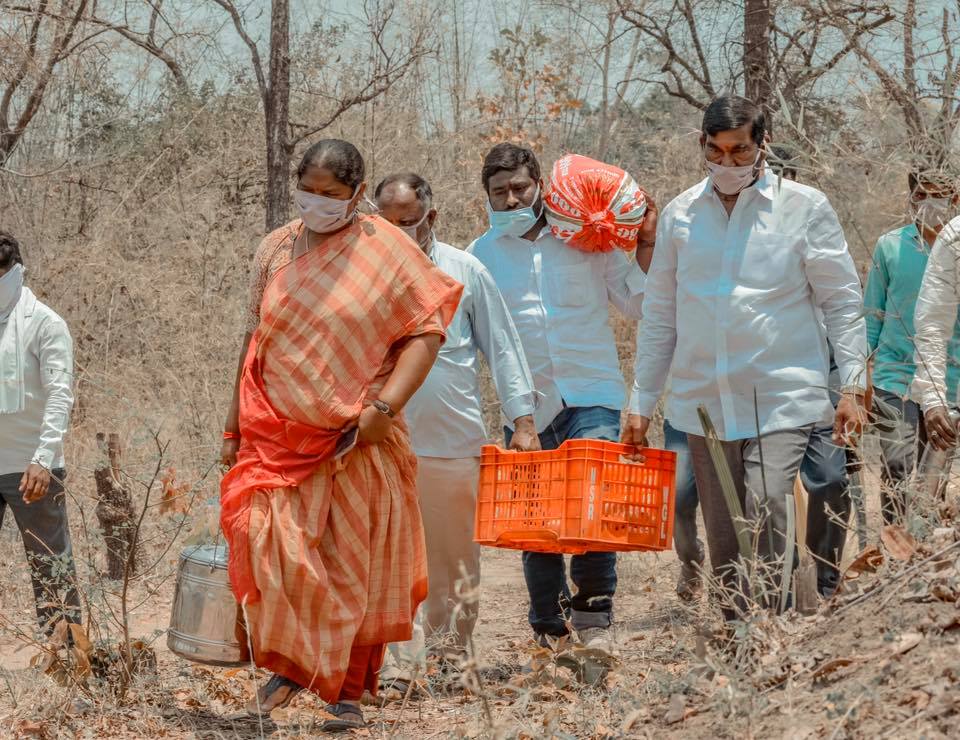 “Firstly, ₹1500 is not enough for a family to survive. Secondly, the money is supposed to come directly to the beneficiary’s bank account. But many Adivasis don’t have bank accounts,” she said.

Anger and mistrust for the government, the police and other government functionaries is common among Adivasis of Mulug which was once a hotbed for Naxal activity.

“People in my constituency love me, they trust me and listen to me. This kind of faith in public representatives is important in an area where insurgents can easily take advantage of the vacuum created due to the government’s inadequacy in addressing the needs of the Adivasi population,” Seethakka said.

“When I was crossing this area (Tupakulagudem village, north of Warangal near the Godavari river that separates neighbouring Chhattisgarh), it took me back to my old days. That time gun in my hand, now rice and vegetables that I distributed among 12 remote tribal villages,” tweeted Seethakka recalling her days as an armed member of the Naxalite group.

Anasuya, her original name, was a member of the Communist Party of India (Marxist-Leninist) Jana Sakthi, a splinter Naxalite outfit, in the 1990s. Her name spelled terror for the local feudal lords, but she was popular among the poor tribals in Etur Nagaram forests abutting Chhattisgarh.

She was drawn towards the Naxalite movement as a 14-year old in 1987, when she was studying in Class IX at a local government school.

However, she got disillusioned with the violent movement and surrendered to the police under general amnesty plan in 1994. She pursued her studies and went on to become a lawyer. 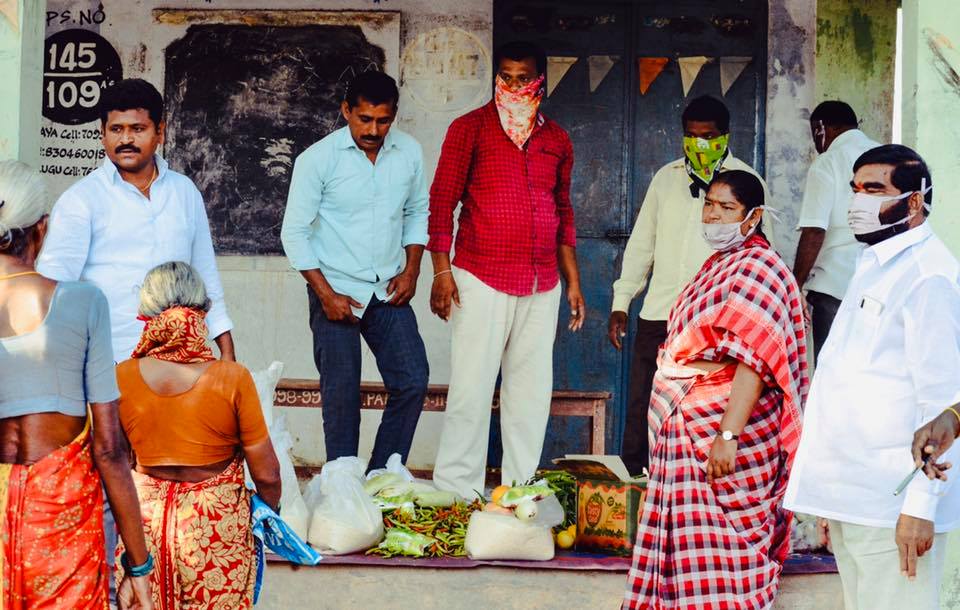 “Most of the tribals are oblivious to the goings-on in the outside world. They have no concept about Covid-19. All that they know is that weekly markets and shops are close and they are not allowed to travel to adjoining villages to buy the essential commodities,” Seethakka said.

She went to Mulug on March 23 before the lockdown was enforced, where she came to know about the deplorable plight of the tribals after some local youth drew her attention to them.

“Some of my party colleagues and I quickly pooled in money and bought rice, dal and other commodities and distributed them among 100 tribals. The following day another 100 adivasis sought my help. This made me realise the intensity of the problem. I have decided to stay put in my constituency to help these hapless people till the crisis blows over,” she said.

The legislator is travelling to every nook and corner of the forests for over three weeks on whatever mode of transport is available. “Some villages are accessible, where I could travel by jeeps and auto-rickshaws. But some are only accessible by tractors and bullock carts,” she says.

The feisty rebel-turned-politician did not hesitate to trek for several kilometres, crossing streams, and rivulets, to reach some of the inaccessible villages while carrying food grains and vegetables for the tribals.

“I made a long trek to Tupakulagudem village, located on the banks of Godavari river,” she said.

Related news: How Hyderabad start-ups are guiding the fight against coronavirus

Anasuya is adept at negotiating the inhospitable terrain, as her Koya tribal roots stand her in good stead in this moment of reckoning.

“I have no problem in locating these tribal hamlets and assessing the villagers’ needs. I don’t take my security personnel along with me on my journey to these villages because I know that the tribals are scared of them,” she said.

She travels from one village to another and usually clocks around 60 odd kilometres. “I have lunch with the villagers and return to Mulug by evening. I have been to each and every village more than once. I have told the villagers to get in touch with me, should they fall short of essential commodities. I have promised them that I’d be there the next day with the supplies,” she added.

Seethakka started a new innings in democratic politics by joining the Telugu Desam Party (TDP) in 2004 in the presence of the party president N Chandrababu Naidu.

She was elected to the combined AP Assembly in 2009 from Mulug constituency but lost from the same seat in 2014 after the formation of the separate Telangana state. In 2017, she quit the TDP and joined the Congress. She wrested Mulug in the 2018 elections.