Tamil Nadu and its harvest festival Pongal are deemed incomplete without Jallikattu, the rustic bull-taming sport. Not all those in Tamil Nadu take part in Jallikattu but it was, for a long time, ingrained in the lives of agricultural and warrior communities.

This could be the reason why the sport is more popular in the southern regions of Tamil Nadu, such as Madurai, than the western parts like Coimbatore.

Bull-taming and Jallikattu became part of popular culture when it got portrayed in Tamil films. Some major blockbusters released in the 90s had village themes and Jallikattu. The protagonist would invariably wrestle around with a bull in a show of masculinity and, more importantly, to woo the dame. Mostly, the bull-taming, in the story line, was a point of agony for the villain who is outshined by the hero in the taming arena too.

Evan as Jallikattu ‘fared well’ in films, Tamil literature seemed reluctant to take in the sport. The earliest references to Jallikattu can be found in ‘Kalithogai,’ a Sangam-era verse. After many years, Jallikattu was referred to in B.R. Rajan Aiyar’s ‘Kamalambal Sarithiram’ (The Fatal Rumour) published in 1896. After that, K.P. Rajagopalan (1902-44), wrote a short story titled ‘Veerammalin Kaalai’ (Veeramma’s Bull), which spoke about bull-taming. The bull was reared by a Kallar girl, Veerammal. 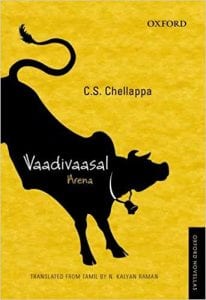 In 1959, writer C.S. Chellappa wrote ‘Vaadivaasal,’ a novella which is considered the most prominent long-fiction in Tamil that has bull-taming at its core. The book was translated into English as ‘Arena’ by N. Kalyan Raman, in 2014.

The story talks about Picchi, a young man from Usilanur, who intends to take revenge on Kaari, the bull which killed his father Ambuli. The animal is owned by Mokkaiya Thevar, the village landlord of Periyapatti, neighbouring Usilanur.

The story revolves around Picchi getting a chance to take revenge at Chellaiyi festival organised in Periyapatti.

Also read | Jallikattu: Inside the mind of a bull-tamer

The enclosure from where the bulls are shoved into the main arena is called ‘Vaadivaasal’ and hence the title. The whole story unfolds in the arena. The story covers things like arousing the bull by twisting its tail, the maddening yell of ‘durr… eeee’ from the back of the bull, and throwing sand and beating its face with sticks.

The very first bull which comes out of ‘vaadivaasal’ is always the temple bull and no one touches it out of respect. The description by the author about the bull makes the reader to perceive the animal as a ‘magnificent’ one.

“The Kaari stood majestically at the wicket gate. The animal’s battened, glistening black hump jutted impressively above the neck-high wooden enclosure. Springing fork-like from the edges of the mound on its forehead, it’s two sharply printed horns with small hook-like curve at each tip glittered and shone impressively. With head lowered and eyes downcast, it stepped forward confidently and slowly, humps subtly undulating and horns swaying from side to side, it came halfway out of the wicket gate and after casting sidelong glances at the anaimarams on either side as a precaution reached the centre of vaadivaasal and stood there.” (Translation Kalyan Raman) 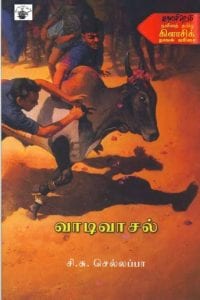 In the reference found in ‘Kamalambal Sarithiram’ and in the short story ‘Veerammalin Kaalai’, the tamed bull is killed at the end of the story by their owners because they consider the bull brought shame to them. In ‘Vaadivaasal’ too, the bull Kaari is killed by the landlord.

The novella showed caste pride and valour of the Maravar community, one of the three major communities classified under Thevar caste. In those days, whenever a bull was defeated in Jallikattu, people used to kill the animal. But, of late, people have been desisting from such cruelty. Now, defeated bulls are rigorously trained for the next event.

The novel is reportedly being made into a film of the same name directed by Vetri Maaran. Actor Surya is said to play the lead role. After this announcement, the book was much sought after at the ongoing 43rd Chennai Book Fair.