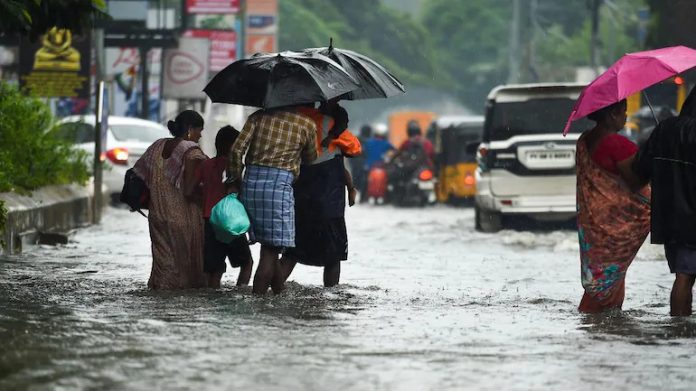 Several pockets of the city including Alwarpet, KK Nagar and Ashok Nagar were inundated with water even gushing into government hospitals at KK Nagar and Chrompet. Pic: PTI

No relief seems in sight for the people of Tamil Nadu as a persistent low-pressure area in the Bay of Bengal continues to lash major parts of the state. Rains have inundated several pockets of capital Chennai, bringing life to a standstill. The state has advised people to avoid stepping out of their homes as the showers are accompanied by howling winds, blowing at the speed of 40 to 45 kms per hour.

The police had to shut as many as 11 subways and divert traffic on other routes. Several pockets of the city like Alwarpet, KK Nagar and Ashok Nagar were inundated with water even gushing into government hospitals at KK Nagar and Chrompet. The hospital managements are using pumps to drain out the water.

An electricity board official in Chennai said that supply to 61,700 out of 44.20 lakh consumers was snapped as a precautionary measure. The power supply is likely to improve only once the rainfall abates, the official said.

Due to heavy rain, accompanied by cross winds, the Airport Authority of India (AAI) had cancelled flight arrivals at the Chennai International Airport from 1.15 pm to 6 pm. However, there are no disruptions in the departures yet, an AAI official said.

Tamil Nadu Revenue Minister KKSSR Ramachandran said that two people died in different rain-related incidents in Thanjavur and Tiruvarur districts on Thursday. With this, the death toll in the state, due to the current round of torrential rains, has gone up to 14. As many as 157 cattle had died, 1,046 huts and 237 houses were damaged, the minister added.

Standing crops in about 1.50 lakh acres of land in the delta region were reportedly damaged, but the exact assessment will be available only after the rains subside. Meanwhile, Chief Minister MK Stalin constituted a team of five ministers, headed by Co-operation Minister I Periyasamy, to assess the extent of crop damage and to provide relief to farmers, Ramachandran said.

A total of 38 districts in the state have received average rainfall of 21.02 mm with Chengalpattu receiving the highest amount of rainfall i.e. 130.64 mm.

The Greater Chennai Corporation has received about 11,290 rain-related complaints till Thursday, of which 5,395 complaints have been resolved. The revenue department has resolved about 1,044 out of 1700 complaints, the minister said, adding that arrangements have been made to provide shelter, food and other necessities to the people whose houses got submerged.

According to a corporation official, the civic body has deployed one official per zone to address rain-related complaints. The Greater Chennai Corporation has been distributing food to over 2.5 lakh people across the city.

Balachandran said that Chennai, Tiruvallur, Kanchipuram and Ranipet districts will receive extremely heavy rainfall in one or two places in the next 24 hours and requested fishermen from Tamil Nadu and South Andhra Pradesh not to venture into the sea.