During one of his excursions last year, Senthil Kumar, an avid birdwatcher for the past three years, photographed a rare bird that was first sighted in 1934. Little did he know that he will shoot to fame due to an accident.

Last year, just like any other day, Kumar went for his bird-watching session in Sorakai, a hilly region in Salem and captured a bird similar to the purple sunbird. He knew the bird looked different from others, and his fellow birders agreed with him.

It was later found that he had achieved the milestone of capturing the white-naped tit (Parus nuchalis) 84 years after it was first spotted.

“Initially I thought that it could be a sunbird but after referring to various bird guides, I found many differences between the physiology of the purple sunbird and the one I photographed. Later, with the help of senior birder Ganeshwar, a member of Salem Ornithological Foundation (SOF) and ornithologist P Jeganathan, and deep internet searches I found that the bird in the photograph was a white-naped tit,” he said.

Also read: Demand for parrots as pets on the rise, species in peril

“The first records of the bird being sighted was in 1934 at the then Madras Presidency. It was said that the bird was sighted in parts of Tamil Nadu like Erode, Salem and other South Indian states like Karnataka, Kerala and Andhra,” he added. 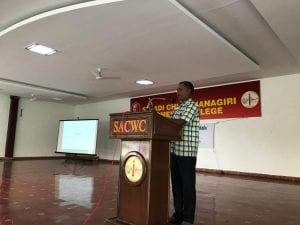 While presenting his findings in the recently concluded ‘6th Tamil Birders Meet’ at Theni district, Kumar said, “I kept a log. I visited the hill again and again and travelled close to 10,000 kms in the past one year. If I go 10 times, I can able to sight the bird for only one time.”

In the last one year, he sighted the bird for 26 times in Salem alone. It was mostly found on the Acacia tree. The bird was also sighted in Andhra Pradesh six times, in Karnataka 35 times and in Tamil Nadu 30 times, including its presence in Salem. Besides, Salem the bird was found in Dharmapuri, Krishnagiri, Tiruvannamalai and Erode districts in Tamil Nadu.

According to the International Union for Conservation of Nature, the white-napped tit is endemic to India and classified as a ‘threatened’ species, said Kumar, who is working as the headmaster in Krishnampudur Panchayat Union Middle School in Salem.

It was from an SOF-conducted awareness programme about birds that Kumar got interested in birdwatching.

“After attending the programme, I kept in touch with the SOF and went for birdwatching regularly. I encourage my students too to take part in such activities and now they know more about birds than me,” Kumar said.

“Till now it was perceived that the bird was a passage migrant. But after the continuous monitoring for three years it is now confirmed that it is a winter resident. During winter, the bird travels to India from Gulf and European countries and stays here for six months,” he said.

Ganeshwar said that these kinds of findings are possible because of citizen science initiatives. “These monitorings may be an amatuer study, but are a significant contribution to science,” he said.

How Nilgiris’ tea, exotic plantations are warding off its ende...