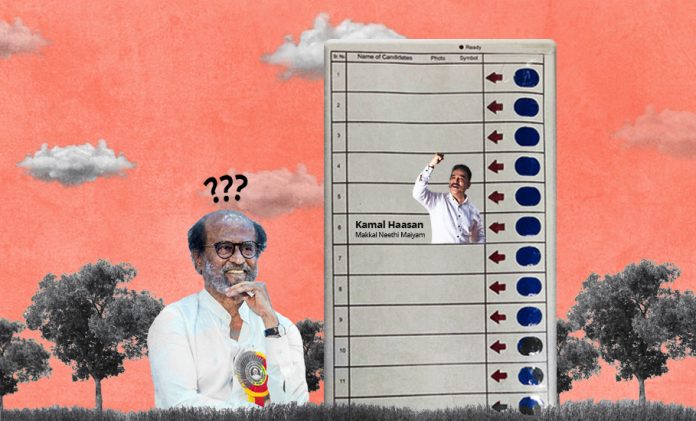 There’s a lot of mushy sentiment that defies traditional logic in understanding Tamil Nadu’s largely Dravidian politics. And with Assembly polls six months away, political observers can’t count the cine idols out before deciding on the script that the polls could follow.

The preface to the political circus is being written ardently with Rajinikanth being nudged by the BJP for more than a ‘guest appearance.’

The matinee idol has taken two steps forward only to retrace one-and-a-half-step backward, forcing BJP chief Amit Shah to request Thalaiva – a fond moniker for the Maratha born actor — to ‘preempt’ a change in the poll script. Rajinikanth is yet to respond even as another actor of a little less heft, Kamal Haasan, has lent his voice to a good cause: voter registration.

Haasan’s debut performance actually flopped at the state’s political marquee in the 2019 Lok Sabha polls – some months after he introduced his Makkal Neethi Maiam (MNM) to the state’s excited electorate. The MNM had a limited impact in only 22 Assembly constituencies. Though the party managed a double-digit vote share in metropolitan constituencies such as Chennai Central, South, North and Coimbatore, it fared poorly in several other parts of the state with all the party’s candidates losing their deposits.

The actor nurses an ambition to occupy the chief minister’s chair and in that eagerness to prove himself in the Assembly polls has urged those eligible to vote (but have not yet registered) to sign up for voter ID cards.

In a two-and-a-half-minute video released on his Twitter account, Haasan has told his fans to take advantage of special registration camps to be set up later this month and in December. “Make this your mantra for the 2021 polls: I will change, I will vote,” the actor-politician says in the video.

Also read: Rajinikanth fans renew cry for ‘Thalaiva’ to be active in politics

The actor-politicians have sensed some gains in the political sweepstakes because both the stalwarts of Tamil politics, J Jayalalithaa of AIADMK and M Karunanidhi of DMK, are no more. These rival Dravidian parties have struggled with leadership issues at a time when national politics is dominated by BJP’s Hindutva agenda.

Meanwhile, the A-lister – the dashing dude of K-Town –Vijay has already said ‘no’ to any political role. The buzz, actually, was about his father, veteran filmmaker SA Chandrashekar (SAC) had turned the actor’s Makkal Iyakkam into a political party.

SAC later said he had applied for registration of a political party in the name All-India Thalapathy Vijay Makkal Iyakkam. “It is my initiative. It is not Vijay’s political party and he has nothing to do with this whatsoever,” the ace director said.

Be that as it may, politics is the art of the possible – and in the 234-member Tamil Nadu Assembly, there is no dearth of possibilities, at a time when a severely wounded Congress is looking to keep its southern foothold with an aggressive BJP is knocking the doors of the well-known players. The party’s much-publicised Vetrivel Yatra has scored talking points with Congress returnee Khushbu Sundar managing to make BJP rivals wake up and take note.

Actor Shruti Haasan says she is ‘glad’ her parents separated