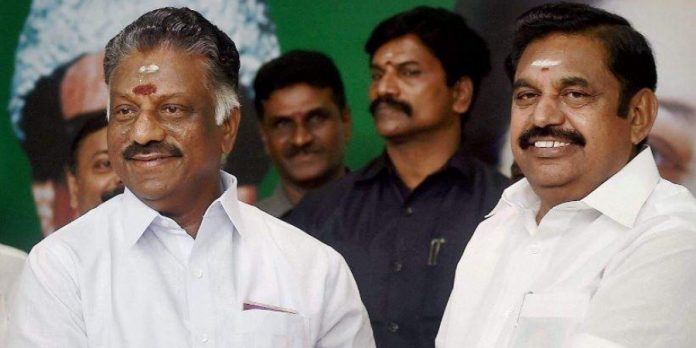 Amid the hullabaloo over the need for a single leadership in the ruling AIADMK, senior ministers of the party said that the dual leadership will continue. The party also decided to constitute a committee comprising party coordinator O Panneerselvam and deputy coordinator and chief minister Edappadi K Palaniswami to guide its day-to-day functioning and decide the further course of action.

The decision was taken at a functionaries’ meeting on Wednesday (June 12). The party also issued a statement asking functionaries and leaders to refrain from talking to the media regarding party affairs.

The meeting was called after Madurai north constituency MLA VV Rajan Chellappa came out in public demanding a single leadership in the party. Subsequently, Kunnam constituency MLA KT Ramachandran also joined the chorus and accused O Panneerselvam of dynasty politics. This caused the party to immediately call for an MLAs and MPs meeting in Chennai, apart from asking cadres to refrain from criticising about the leadership in public.

Speaking to the media after the meeting, fisheries minister D Jayakumar said there was no crisis in the party. “Nothing about change in leadership was discussed in the meeting,” he said.

Echoing his voice, milk and dairy development minister KT Rajenthra Bhalaji said there is no need to discuss about the leadership and said that the dual leadership would continue in the AIADMK.

Meanwhile, in a joint statement, party coordinator O Panneerselvam and joint coordinator and chief minister Edappadi K Palaniswami asked cadres to refrain from expressing their opinion as the party’s opinion in any media or social media platforms. “If violated, disciplinary action would be taken action the responsible people,” the statement read.

An MLA who attended the meeting, said there were discussions to constitute a committee comprising party coordinator O Panneerselvam and deputy coordinator and chief minister Edappadi K Palaniswami to guide the party’s day-to-day functioning and to decide the further course of action.

However, they did not arrive at a conclusion in the meeting about the committee. In the meeting, the AIADMK adopted five resolutions in which they also congratulated Prime Minister Narendra Modi for his second term in office.

“The cadres can express their views in the party’s flora, but not in the public. It would become an opportunity for the opposition,”Panneerselvam and Edappadi K Palaniswami told in a joint statement earlier.