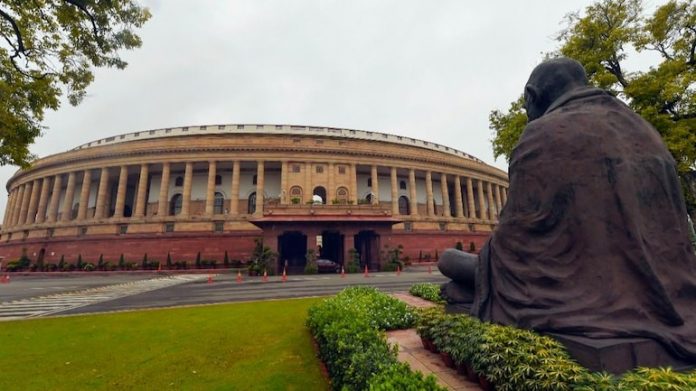 The Madras High Court lamented that until 1962, Tamil Nadu had 41 MPs representing Lok Sabha, which has dropped to 39 currently. Pic: PTI

Raising the issue of the “unfairness” behind Tamil Nadu losing crucial seats in the Lok Sabha due to its success in controlling its population, the Madras High Court has asked the Centre if it can either financially compensate the state or give it representation in the Rajya Sabha.

But the question is whether Tamil Nadu is really affected by this drop in its number of MPs in the Lower House of the Parliament?

Last week, while hearing a petition on the dereservation of a Tamil Nadu parliamentary constituency, the Madras High Court raised serious questions about the state’s loss of representation in the Lok Sabha due to a dip in the size of its population.

The Bench, comprising Justices N Kirubakaran (who retired on August 19) and B Pugalendhi, while passing an order on August 17 observed that it is “unreasonable” and “unfair” that states like Tamil Nadu which had contained its population are losing representation in the Lok Sabha.

This observation was made during the hearing of a petition on converting the reserved Tenkasi parliamentary constituency into a general one. The petitioner wanted the constituency, which has been reserved for the past 50 years, to be opened up for all castes to contest.

The Court however went on to state that ‘normally, a state government has to be honoured and complimented for successfully implementing Central Government's policies and projects etc., and the interests of such a state cannot be adversely affected”.

The Court lamented that until 1962, Tamil Nadu had 41 MPs representing Lok Sabha, which has dropped to 39 currently.

Loss due to MPs reduction?

The Bench has raised eight queries and suo moto ordered all the political parties in the state to respond within four weeks. Further, it has asked the Union government to either financially compensate Tamil Nadu for the loss of 28 MPs (two candidates per election) for the last 14 elections that have been held from 1967 or to give the state more representation in the Rajya Sabha.

"Tamil Nadu and Andhra Pradesh lost two Lok Sabha seats after they effectively controlled the population. Why the states which could not successfully implement population benefits have more representation in Parliament? Why not compensate these states with equal Rajya Sabha seats," asked the bench.

"But it is difficult to prove that the state suffered due to the reduced number of MPs," said D Ravikumar, general secretary, Viduthalai Chiruthaigal Katchi and a Lok Sabha MP from Villupuram.

He added that asking compensation for the state is meaningless since the delimitation exercise is carried out according to the Constitution. "It is an imaginary solution for a real problem without understanding its dimensions," he commented.

Talking to The Federal, DMK Rajya Sabha MP Trichy Siva said that the party will contest this issue.

"When Tamil Nadu has cleverly controlled its population, our revenue has decreased. Since the allocations are made on the basis of population, our share has reduced and we need to find a new route to carry out delimitation to ensure all the states get equal proportion," said Siva.

"When the numbers are increased in Lok Sabha, naturally the numbers in Rajya Sabha too should go up. But what is the methodology? That we need to discuss," he added.

KS Radhakrishnan, advocate and a political commentator suggested that instead of mechanically carrying out the delimitation exercise, it should be done on cultural grounds.

"There is no application of mind when delimitation happens. Either it should be carried based on the issues or problems faced by the people or based on the geographical contiguity," he pointed out.

He also added that the government should provide equal representation to the states in Rajya Sabha similar to how it is done in the Australian parliament.

In Tamil Nadu, out of seven reserved parliamentary constituencies six are in the northern districts. The Tenkasi constituency (which is southern Tamil Nadu) was saved from becoming a general constituency in the last delimitation (carried in 2008), following the demonstrations by the SC people. Under rotational basis, it should have become a general constituency. But it has not, and that is the reason for the opposition, Ravikumar said.

"Similarly, at a national level, instead of reducing the north-south divide, the government increases the divide to be able to achieve its objectives. A government which should create a federal setup, is trying to become an unitary government by tampering with the state list. The delimitation process is part of the government’s attempts to increase the divide," he alleged.

Ravikumar pointed out that while carrying out the next delimitation, the government should consider three points before executing the exercise.

"One, it should take note of the debates carried in the Constituent Assembly on delimitation. Two, the delimitation should give weightage to the federal structure. Three, it should bridge the north-south divide," said Ravikumar.