Last week, the priests of Chathuranga Vallabhanathar temple performed a special pooja for the Chess Olympiad to become a grand success. Pic: tntemplesproject.in

Tamil Nadu has temples that devotees visit for visa approval, good board exam scores and to clear the CA exam. Now, with chess fever gripping the state, thanks to the Olympiad being hosted by Chennai, an ancient temple in interior Tamil Nadu is seeing inreased devotee footfall. 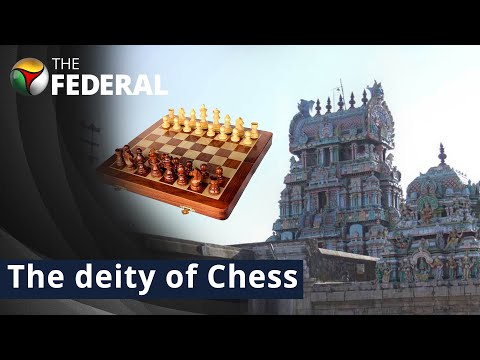 Located in Thirupoovanur village near Needamangalam block in Tiruvarur district, the temple has a legend that Lord Shiva came in the guise of an ascetic and married Rajarajeswari, an incarnation of Lord Parvathi, after winning her in a game of sathurangam, Tamil for chess.

“In ancient times, a king named Vasusenan ruled Tirunelveli region. He was married to Gandhimathi. The couple were ardent devotees of Lord Shiva. Though they lived happily, they didn’t have a child. One day both of them started fasting in the Nellaiappar and Gandhimathi temple in Tirunelveli and begged to be blessed by a child. Seeing their steadfast devotion, Lord Shiva blessed them with a girl child” said Prabakaran, a temple official.

One day, while the couple were taking bath in River Thamirabharani, they saw a baby girl coming towards them, lying in a lotus flower. The couple named the girl Rajarajeswari and showered her with their love and affection.

“While growing up, Rajarajeswari became invincible in the game of chess. Knowing her talent for the game, Vasusenan announced that he would marry her off to the man who defeated her in chess. It was at that time that Lord Shiva, disguised as an ascetic, challenged Rajarajeswari in chess. He won and showed his true self to the people. Rajarajeswari was then married to Lord Shiva,” Prabakaran added.

“In this temple, we follow aaru kala pooja (six times in a day). Since the inauguration of the Olympiad is to take place in the evening, we planned to perform a small pooja in the evening in our temple,” said V Gowrishankar, one of the temple priests.

The temple officials have been receiving calls from all over the world, enquiring about the pooja timings, history etc., say media reports. Local chess players in and around the Delta region have also visited the temple to organise a small tournament in the temple campus.

“We are expecting some players to come to this temple once the event gets over,” Gowrishankar added.

Prabakaran said that though there is a legend that Lord Shiva played chess here, the temple lacks any visual or inscriptional proof to substantiate the claim.

Other attractions of the temple

Besides the presiding deities, the temple has a shrine for Goddess Chamundeeswari.

“After Mysore, the shrine for Chamundeeswari Devi located in this temple is popular among devotees across the country. Also, the people who are affected by snake bites and other venomous creatures visit here after their treatment and believe that they won’t be attacked by those venomous creatures again,” said Gowrishankar.

The poet saint Thirunavukkarasar wrote and recited a song in praise of the Chathuranga Vallabhanathar temple. The song is included in Thevaram, a major Saivite text. The temple is 220th in the list of 276 temples in which the triumvirate of poet saints Thirugnana Sambandar, Thirunavukkarasar and Sundarar recited songs in 7th and 8th century CE.