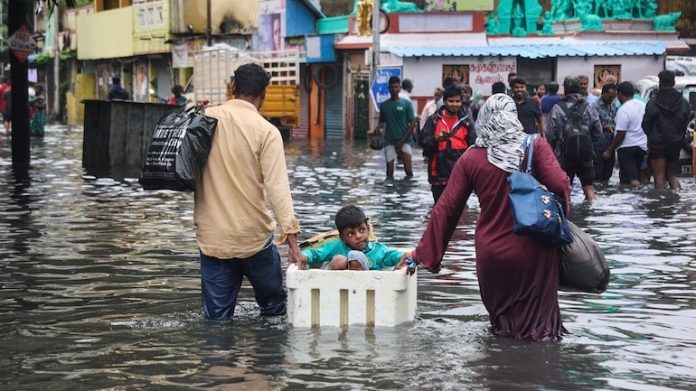 In water-logged areas in Chennai, residents paid from their own pockets to drain the water using pumps. If there were local body representatives, they could have ordered the government machinery to take up the works sans bribing the officials. Pic: PTI

The stormy arrival of the northeast monsoon which led to flooding in Chennai and disrupted normal life, has once again emphasised the crying need for urban local body representatives like municipal and corporation councillors and Mayors.

Established as a municipal institution in 1688, the Chennai Corporation, the second oldest corporation in the world, expanded into Greater Chennai Corporation in October 2011. It now has 15 zones and 200 wards. In principle, though the city hosts all the important government establishments including the secretariat, it comes under the control of the Mayor and the position is a much revered one.

Since its inception, the Corporation went into sleep mode thrice. The first time in September 1746, due to the French invasion of the then Madras. It was resumed only in 1753. Then in 1973, because of the ‘Muster Roll Scam’, in which the Corporation’s former Mayors, members and some higher officials allegedly looted lakhs of money by creating a bogus muster rolls of casual labour, the then DMK government dismissed the Corporation and its operations halted for the second time.

It resumed only in 1996, following the 73rd and 74th amendments in the Constitution that mandated states to have elected local body governments both in rural and urban areas. Earlier, the Corporation was under some special officers. It was in 1996, the current CM MK Stalin became the Mayor of Chennai for the first time. It was at that time the city was renamed as Chennai from Madras.

Chennai Corporation to get new life

In October 2016, the terms of the local body representatives came to an end and since then the elections for urban local bodies have not been conducted. It is interesting to note that just like the former CM MGR did not show an interest to revive the Corporation during his decade long regime, the last AIADMK government headed by Edappadi K Palaniswami, too did not make any efforts to conduct local body elections. After a extensive legal battle by the then Opposition party DMK, the AIADMK government actually stirred itself to conduct rural local body polls in December 2019.

Now, the DMK is preparing to hold the urban local body polls in another few months. As a run-up to the polls, the government has recently upgraded six municipalities namely Tambaram, Kanchipuram, Kumbakonam, Karur, Cuddalore and Sivakasi, into Corporations. With these new additions, the state now has 21 Corporations.

When Stalin was the Mayor, he brought the ‘Singara Chennai’ scheme to provide a facelift to the city’s infrastructure projects like the laying of roads, building bridges, beautification of parks, cleaning of Cooum, etc. After he assumed power as a first time CM in May this year, his pet project has got a new lease of life. This scheme is expected to take up projects related to transforming the city’s shoreline, renovating heritage buildings, etc.

Also read: It isn’t over yet: More rains likely in Tamil Nadu till November 11

Though the Corporation has been inactive after 2016, due to schemes like the Union government’s ‘Smart Cities Project’, some of the road laying works, construction of storm water drainage, creation of new pedestrian plazas in Pondy Bazaar, etc., were taken up.

Interestingly, in February this year, the Corporation had passed a close door ‘secret’ budget just before the Election Commission of India announced the dates for the state Assembly elections. The budget for the fiscal year 2021-2022 showed that it had a total deficit of ₹554 crore.

Meanwhile, in the 2021-2022 interim budget tabled by the AIADMK government in February, it had allocated Chennai Corporation ₹3,140 crore for general development projects. And, in the 2020-2021 budget, the state had allocated the Chennai Corporation ₹3,000 crore for a comprehensive flood mitigation project. The project was said to be undertaken with the help of the World Bank and Asian Infrastructure Investment Bank.

Despite these massive budget allocations, it is unclear what kinds of projects were undertaken by the government to mitigate the impact of floods. Take the stormwater drainages for example. Though the AIADMK claims that it has constructed stormwater drains in many parts of the city, water logging is evident.

“Even recently the Corporation has allocated ₹120 crore for stormwater drainage systems. But it is for demolition and reconstruction of drains. It means they demolish the existing storm water drains and reconstruct it, instead of constructing a new drainage system in the place where such a facility is needed. They fail to identify the missing links and connect them with water bodies,” said Jayaram Venkatesan, convenor, Arappor Iyakkam, a city-based NGO.

He also alleged that out of 46 water bodies, the Corporation has not taken up the maintenance works in many of the water bodies even after two years.

“When you have local body representatives there will be some accountability since they need the voters’ support for the next elections. It is to be noted that during the construction of stormwater drains, even the engineer would not be present. So the quality of construction would be compromised and the projects involve a lot of corruption, pointed out Venkatesan.

Like how we have gram sabhas to know the people’s needs in rural areas, we also need ‘area sabhas’ to know the demands of the urban citizens. We have laws pertaining to area sabhas but they are not being implemented, he added.

S Nandakumar, general secretary, Thannatchi, an organisation working towards creating awareness about the importance of local bodies, said urban governance is still in the hands of political parties, as opposed to rural governance, where the people have a say.

Further, he said, “In cities like New York, when the Twin Tower attack happened, though it was an international issue, it was the Mayor of the city who led from the front. But here, in 2015, when the city was flooding, every step was taken following the orders from the CM. This shows how the urban local body is powerless.”

In water-logged areas, the residents paid from their own pockets to drain the water using pumps. If there were local body representatives, they could have ordered the government machinery to take up the works sans bribing the officials, added Nandakumar.

RS Venkatesan, a PMK leader and Chennai Corporation’s former member said that the local bodies act as a bridge between the Corporation and the people.

“Since there are no urban local bodies now, we find it difficult to get the work done by the officers,” he said. And, thereby hangs a watery tale.