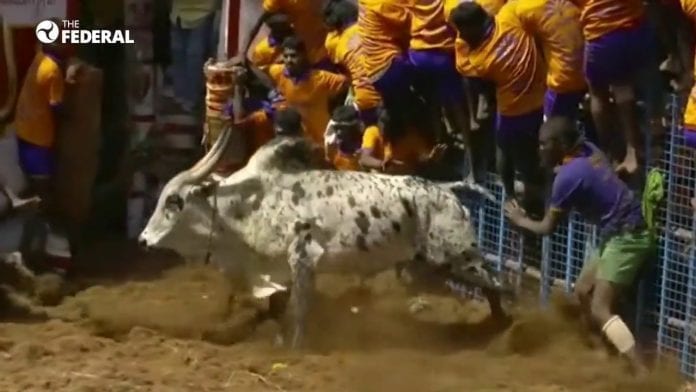 When Ravana came out in the Jallikattu arena, ‘touch him and see’ dared the commentator. Within minutes, the reason behind the announcement was clear.

The famed bull of Jallikatu in Pudukottai – Ravana – flung both the tamers and spectators in the air, registering his presence in a violent manner.

Soon, scared tamers in saffron jersey started taking to the temporary shelters built around to escape a gore from Ravana at the event held in Avaniapuram, Madurai. 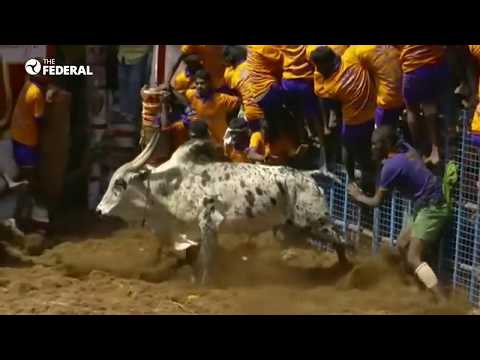 The name, Ravana has various connotations for people in Tamil Nadu and although, the bull owners did not name the bull Ravana for any specific reason, it garnered attention.

Similarly, recently at an event of Thuglak magazine, actor Rajinikanth spoke about a rally organised by Dravidar Kazhagam in 1971 where he said, Lord Ram and Sita’s effigies were paraded without clothes and garlanded with footwear.

However, according to the Dravidian outfit leaders, no such incident happened. Instead, they claim that the rally was a part of a conference organised by Dravidar Kazhagam to eradicate superstition.

“Seeking a ban for the rally, Jana Sangh party cadres showed black flag to the rally organised by Periyar. It was the former Chief Minister Kalaingar Karunanidhi’s government that gave permission to the black flag protest as well. One person from the Jana Sangh crowd threw a slipper on Periyar. However, the slipper did not fall on him and fell on a vehicle behind Periyar’s, in which the effigy of Ram and Sita were kept.

One of the Dravidar Kazhagam cadres then took the slipper and slapped Ram’s effigy,” said Suba Veerapandian, writer and a Periyarist.

Veerapandian also claims that Periyar came to know about the incident much later.

Following the rally, Jana Sangh in their campaign spread a false narrative that Periyar slapped Ram’s effigy with a slipper.

Subsequently, there was huge criticism and opposition from the people from different quarters who resorted to burning Thanthai Periyar’s effigy.

Tending to the situation, on February 12, 1971, Periyar wrote an editorial in Viduthalai – a daily newspaper and Dravidar Kazhagam’s mouthpiece – with the title ‘Be patient comrades.’

“Whatever they (Jana Sangh) are doing, is neither to save Ram nor to oppose us, but to stop DMK from coming back to power. Not just my effigy, even if they beat me with slippers, do not get agitated and worried. It is not new to us,” wrote Periyar asking his followers to remain calm.

Though there is no dearth of Ram devotees in Tamil Nadu, Dravidian outfits and political parties have been critical about the Ram and Ravana narrative.

Probably because of how Ramayana portrays Ravana and Ram in distinguished lights and the geopolitical location of their abodes, people and politicians remain critical of the topic.

In fact, Tamil Nadu was the only state to organise Ravana Leela in protest against the Ram Leela celebration in North India.

In 1973, in his personal notes, Periyar had mentioned his interest to conduct Ravana Leela in Tamil Nadu.

And a year after his death, in 1974, Ravana Leela was celebrated as a part of the two days conference to commemorate the death anniversary of Periyar on December 24.

Advocate Duraisamy of Thanthai Periyar Dravidar Kazhagam feels that the need to conduct another Ravana Leela has arisen now.

Not just the Dravidian outfits, state’s former CM late M Karunanidhi himself had said, “If you insult Ravana, you are insulting me.”