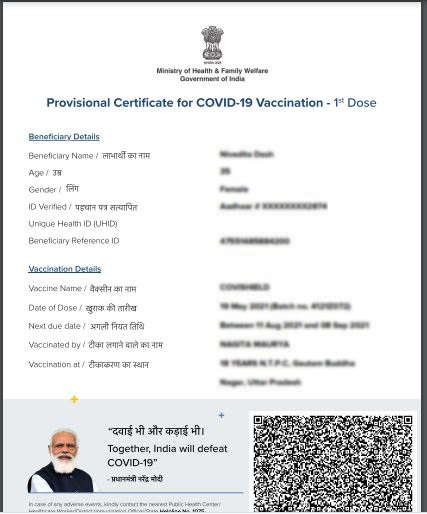 An RTI activist from Kottayam has approached the Kerala High Court asking for removal of Prime Minister Narendra Modi’s photograph from his COVID-19 vaccination certificate to “protect his fundamental right”.

Myaliparambil, a senior citizen, said in his plea that he paid for buying his Covishield vaccine at a private hospital in Kottayam, mainly because he could not get a free vaccine at designated hospitals.

“The petitioner has paid for his vaccination…. In fact, it was the non-availability of free vaccine slots that led to the petitioner opting for the paid vaccination. The state has no right to claim credit by inserting a photograph of the Hon’ble Prime Minister in the certificate issued to a paid-vaccine recipient,” Myaliparambil said.

The petitioner also attached copies of vaccination certificates from other countries to emphasise on the point that no head of state or government has tried to use his/her photograph for self-promotion via vaccine certificates.

Also read: Father does not own his daughter, child has right to use mother’s surname: HC

The Telegraph reported that the petitioner has contended that nobody has the right to encroach on his privacy. “The certificate issued to the petitioner, in his name, having his personal details and the details of a medical record, is his private space. The State has no right to access that space, any more than the petitioner consents to it,” said Myaliparambil.

The petitioner said the national vaccination campaign is being converted into a media campaign and made into a “one-man show, a propaganda to project an individual at State expense”.

Kerala High Court Justice P B Suresh Kumar has asked the Union and state governments to file their responses within two weeks.